20 Years Later, "Josie and the Pussycats" Is Finally Appreciated as a Parody of Advertising

By Steve Gidlow April 21, 2021 Behind the Scenes in Hollywood Archives 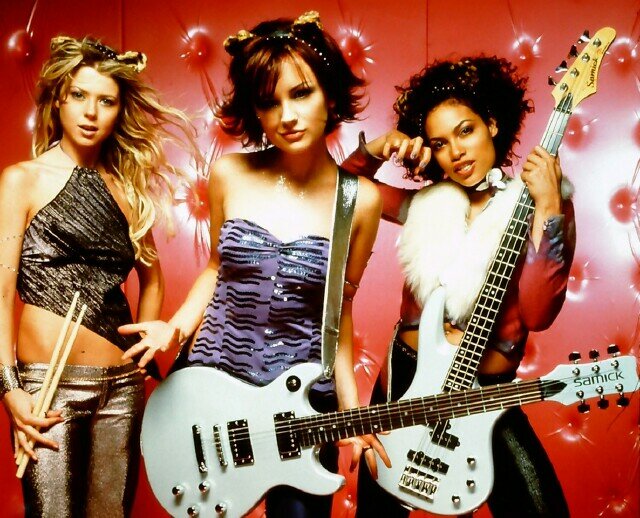 The feature film Josie and the Pussycats celebrated its 20th anniversary last week, leaving some asking, "Why after all this time is a massive box-office flop now so fondly remembered?" The answer is simple -- it's totally awesome. Based on the Hanna Barbera cartoon of the early '70s, and originally released on April 11, 2001, Josie and the Pussycats (complete with "long tails and ears for hats") targeted the MTV/TRL generation; a consumer-filled teen-demographic that eagerly lapped up anything N'Sync and Britney Spears that included everything from dolls to lip balm.

Long before The CW put a dark, disturbing spin on these iconic characters and their once sunny locale, Josie and the Pussycats told the tale of three girls from the small town of Riverdale whose band reaches superstardom after being signed to Mega Records. However, unbeknownst to them, they are a part of a secret government-backed consumer marketing plot that plants subliminal messages in their music, brainwashing fickle teens to spend, spend, spend their disposable incomes, and at a moment's notice have them believe that "orange is the new pink." While a genius premise -- satirizing your target audience as mindless trend followers -- it was maybe not a wise one, and it likely contributed to the film's downfall (despite its strong message of women's empowerment). Critics savaged it, with many taking aim at the film's blatant commercialism and product placement, which was actually the entire point. 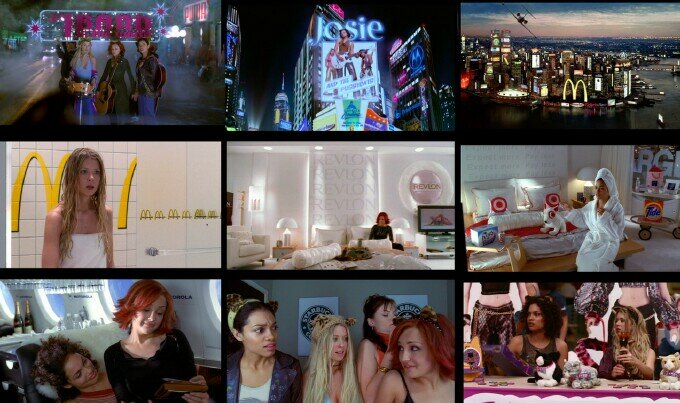 As one of the first movies to feature an abundance of product placement (for which the production was not compensated), Josie and the Pussycats set a trend by putting branding on full display in almost every scene -- most notably in the branded hotel rooms utilized by the girls, along with Motorola-themed jets. While branding partnerships in film are not unusual today, and corporate sponsorship now finances film projects, in 2001 this wasn't so common.

"Marketing was part of the script and story and we really relied on the products used," explained production designer Jasna Stefanovich when I visited the Vancouver set in 2000 on the last day of shooting. "The hotel rooms include AOL, Target and Revlon, and we even made a fantasy McDonalds bathroom with the logo in the tiles, and a body wash that was made of french-fry toys. It took a long time to organize because it hasn't been done, and before, no way [could] a character hold a Coke can, so there was about three months of preparation.

"They [also] had to be recognizable products," she continued. "Because the movie is a light satire, these products would be lampooning themselves. We approached companies and they had no idea how we were going to use their products. Some said 'okay' while some turned us down. There was no approval process. It was, 'Let [us] do what we want or that's it.' A lot of the high-end designers like Gucci and Prada aimed at older people said 'no.' But big department stores [agreed]. It was strange. Most companies lightened up and let us do what we wanted. Coke, Evian and Starbucks all said, 'Do what you want.' This movie is the Jurassic Park of product placement."

"Everything you see in the film will be available in stores," said the film's co-writer/co-director Deborah Kaplan on set.

"Even the dolls in the movie," added her creative partner Harry Elfont. "We are satirizing the fact that as soon as someone becomes famous there are dolls and t-shirts, and they are all going to be [sold] in stores."

The fact the film pulled in just under $15 million at the box office meant much of the clever merchandise languished on store shelves before hitting clearance bins. 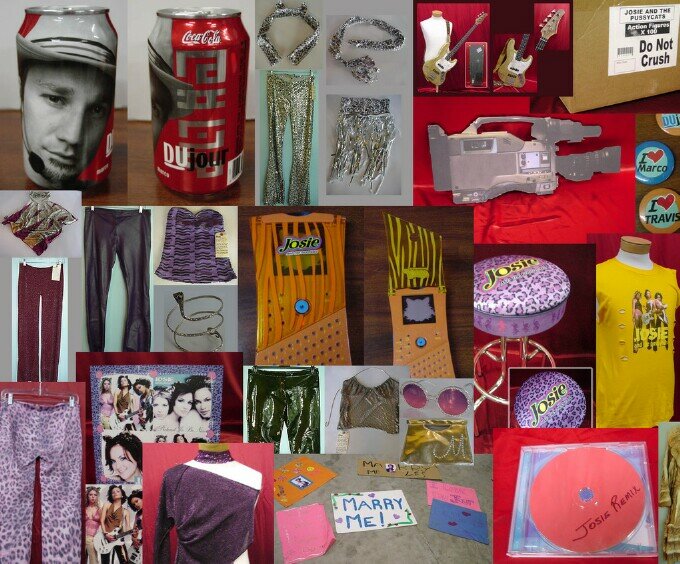 Later in 2001, Josie would become one of the first films to auction off its props and costumes (pictured above) on eBay, further maximizing its commercialism.

But a funny thing happened on the way to 2021 and the film's 20th anniversary. Perception of product placement changed. A new generation of savvy, business-minded teens emerged -- a generation that came of age branding themselves and embracing consumer partnerships. This new breed is also attuned to the constant advertising flow provided via social media platforms like Instagram, Facebook and Twitter, and aren't offended by the blatant commercialism the film tried to lampoon. As a nostalgia piece, they view Josie as the satire of advertising that it was intended to be and appreciate just how far ahead of its time it was.

"I love that movie, but there is a lot of adult humor for a movie aimed at a teenage audience," shared Cook when I asked her about the film in 2012. "I get a lot of people telling me how much they love that movie now -- and how ahead of its time it was."

In September of 2017 the cast and crew reunited at Los Angeles' Ace Theater to celebrate the vinyl release of the soundtrack to a packed screening of enthusiastic devotees. "We were ahead of the times," raved Reid at that gathering. "We were pre-Facebook, Twitter and Instagram. Subliminal messages? No one got it. Today it would be a totally different story."

"I just loved that we were trying to make a great movie about pop culture, the media, and everything," added Dawson. "It felt indie, but on a big scale in a very particular moment in time. It was such a special experience, with so many amazing moments. I'm so glad it found its audience over time, and I'm still happy to talk about it, which isn't always the case with movies."

Most recently its three leads came together for a 20th anniversary Zoom reunion, with the message of being ahead of its time still as strong as the friendships formed on set over 20 years ago.