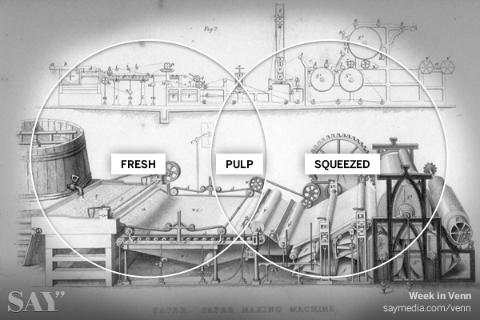 There are three types of storytelling we get these days from mainstream media. The most common is the one found in periodicals and news dailies with a straight headline, a quick declarative sentence ending in a period: "Here's the story." The second type of storytelling focuses on an open discussion, or a set of perspectives, with no clear ending. They might be serials, cliffhangers, or crescendo builders – at their best, they introduce an element of suspense, of "what if." Like an exercise machine, these elliptical stories can take you somewhere without actually moving you from your current position. You might say: "The story is unfolding."

A third approach is comical. Though these stories may bring levity, they are more similar to the structure of a comma in a sentence – the paused beat before a completed thought – than to strict comedy per se. While they can certainly end in a punch line, the most satisfying comical stories are those that allude to a broader truth or perspective without specifically stating it – somethingThe Onion is particularly gifted at achieving. There is a clear point at the end, but it may not be laid out directly. It may ask you to read between the lines or it may throw an aside your way as if to say, "That's another story."

Why all the positioning on segments of storytelling? Mostly, because we've seen some of the most noteworthy storytelling periodicals, namely Newsweek (an exercise in global review) and The Daily (an experiment in tablet-only content), shutter the most conspicuous portions of their businesses; we've seen digital-only entertainment comicals like IGN pop up in the acquisition rumor mill again; and we've seen the well-deserved rise of elliptical blogs like Nate Silver'sFiveThirtyEight tied to an open question of whether now that THE election is over, will its audience stick around between now and the midterms?

For the periodicals, reasons abound for these shifts, but it seems to fall mostly on any continued distinction for revenue sources (what does a 10-page commitment get me here that I can't get anywhere else for Brand X?) and differentiated relevance for readers (what can I access here that I can't get anywhere else regarding Topic X?). As Newsweek fades into the Daily Beast, as The Daily evaporates into other News Corp digital channels, as IGN searches for a new home (allegedly) and as FiveThirtyEight hopes to keep the thrill alive, a new set of storytellers waits in the wings, ready to entice audiences, pitch for and land media dollars, and make a go of it.

So where will audiences assemble to read the next great headline in 2013? Tablets – while many rightly expect substantial growth from and attention paid to these more-portable screens in the coming days/months/years – are not unto themselves a mobile messiah. Traditional print offerings may feel increasingly anachronistic, but every time I wait for a flight, I see dozens of passengers browsing through magazine titles as they wait to buy a Smart/Fiji/LaGuardia-branded water, not just simply swiping through Pulse, Zite or Google Currents. Premium online destinations will not be absorbed and presented universally via RSS. Dual screen experiences will deliver additional innovation to linear TV, but if the programming is good enough, viewers won't be watching the second screen. And when it's not, they 're checking sports scores, social outlets and SMS threads rather than tapping into more TV-based apps. Each of these canvasses offers opportunity, and it is through a combination of periodical headlines, elliptical suspense, and comical underpinnings that they will deliver the greatest breadth and adhesion to readers.