By Simon Applebaum May 04, 2021 Upfronts/NewFronts Archives 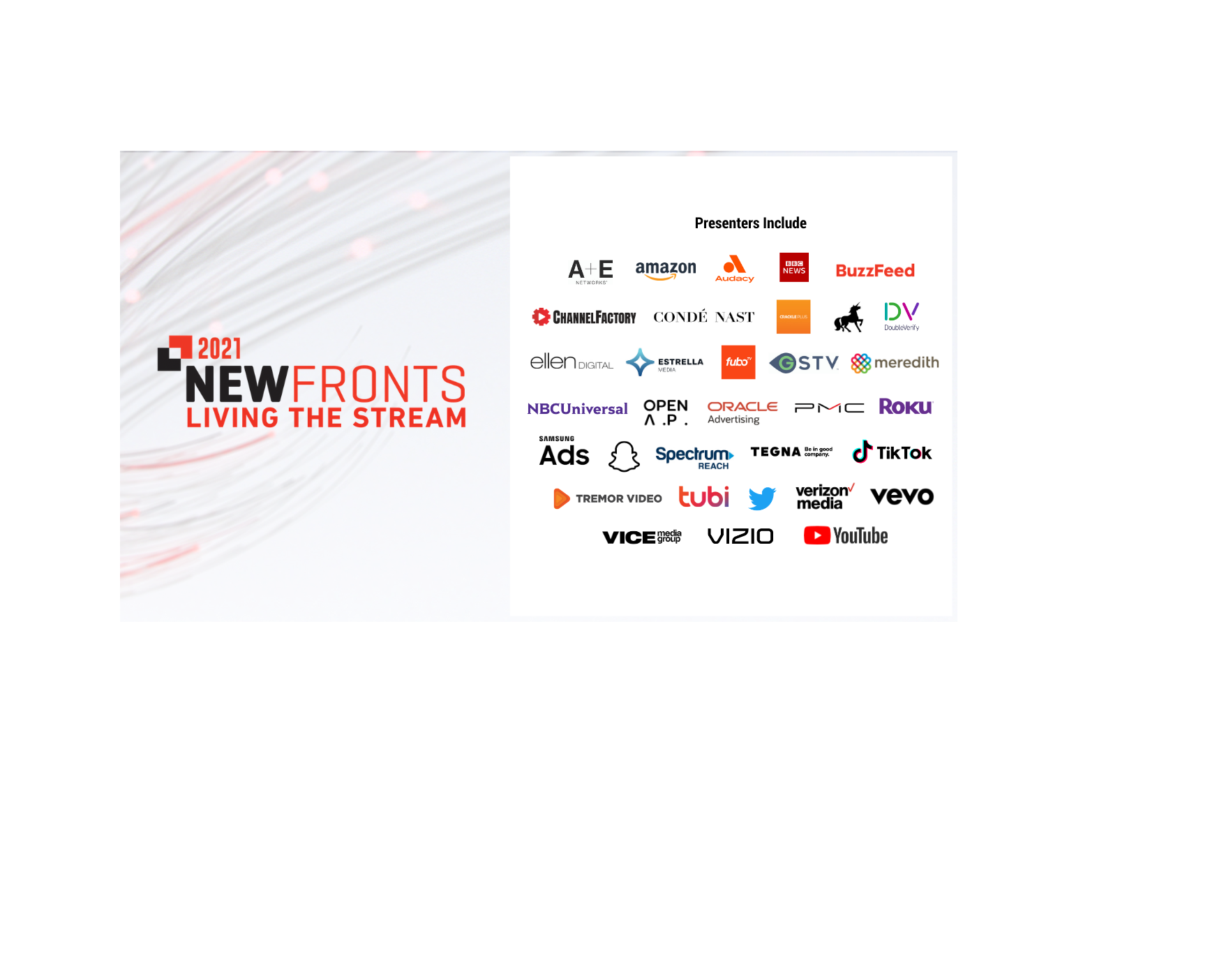 When the Digital Content NewFronts launched a decade ago, the focus was on advancing the internet as an impactful, effective national advertising medium on par with broadcast and cable television. There's a different focus in play now with the Interactive Advertising Bureau's annual multi-day event, which kicked off virtually this past Monday afternoon. Ready to stand tall among national ad vehicles this Upfront season in IAB's estimation: Smart TV products and the programming services distributed through them -- individually or in aggregated multi-channel bundles.

The Big Message: With more than 80 percent of U.S. households watching tens of billions of hours of content and applications via smart TV sets and devices, it's time for advertisers and agencies to dramatically push dollars into this marketplace and design innovative formats that call consumers to action. "Interactivity needs to be a part of the experience," said David Cohen, IAB's chief executive officer. "The ads must be relevant and engaging. We will not get a second chance at this." What's more, some of the key smart TV companies are extending their business -- making hardware and aggregating services -- into direct content/service creation.

Host: Maria Menounos, the former entertainment news show host now doing Better Together for YouTube. From the get-go (speaking from a nicely arranged bookshelf set), she handled her ringmaster duty with impressive poise and enthusiasm, especially in the wake of personal tragedy, losing her mother this past weekend to brain cancer. Kudos to Cohen for offering condolences to Menounos' family during his opening remarks.

What Worked: Presentation after presentation generating news, easy-to-understand data sequences and advertiser testimonials. Production quality was on a high level, and the executive speakers came off natural and right to the point. Menounos invited her co-host (Business Insider correspondent Claire Atkinson) to offer immediate feedback after many of the presentations, and viewers to get their say through a chatroom running on the right of the screen.

What Also Worked: Launching (on late notice) a daily showcase for emerging content or service companies organized by talent of color. First up: Blacktag, an ad-supported venture launching later this year that will have qualities of both Netflix and YouTube. That is, it will present original professional programs and user-generated content. Another highlight was a demonstration of innovative campaigns from fast-food chains Sonic and Del Taco, inviting viewers to control how long their message runs, play a trivia game or place a home delivery order.

What Didn't Work: Buffering issues throughout the event, resulting in awkward transitions during Samsung's presentation and numerous chat room remarks. Another common practice going on far too often from one sequence to another: disorienting cutaways to side shots of speakers, when they face forward to another camera.

News: There was enough to satisfy any television newshound.

Roku's new lineup of original programming will roll out during the second half of 2021, and besides content generated by Quibi, will include new episodes of This Old House and Ask This Old House.

Tubi will generate more than 140 hours of original programming this fall and beyond, including live action and animated made-for-TV movies and documentary specials.

Samsung will offer advertisers full-channel sponsorships for any of the 160-plus services in its TV Plus catalog.

IMDb TV will take a dramatic leap into original series offerings starting July 9 with the reboot of former TNT hit Leverage (which will get a second window next year on Ion Television). Also forthcoming: On Call, Dick Wolf's first production for a smart TV-distributed network, a new Judge Judy courtroom series and a roster of scripted possibilities from the likes of Norman Lear, Orange Is the New Black co-star Laverne Cox and Peabody-winning creator/producer Michael Schur.

"Often, when a service adds a plus to their name it's a minus for advertisers." -- Fox Entertainment CEO Charlie Collier, during Tubi's segment.

"I'm looking forward to next year, when my title is alongside Halle Berry." -- Tubi made-for-TV movie writer/producer Rasheeda Garner

"Our ad sales team looks forward to a million Zoom meetings with all of you." -- Fubo TV host/personality Julie Stewart-Binks