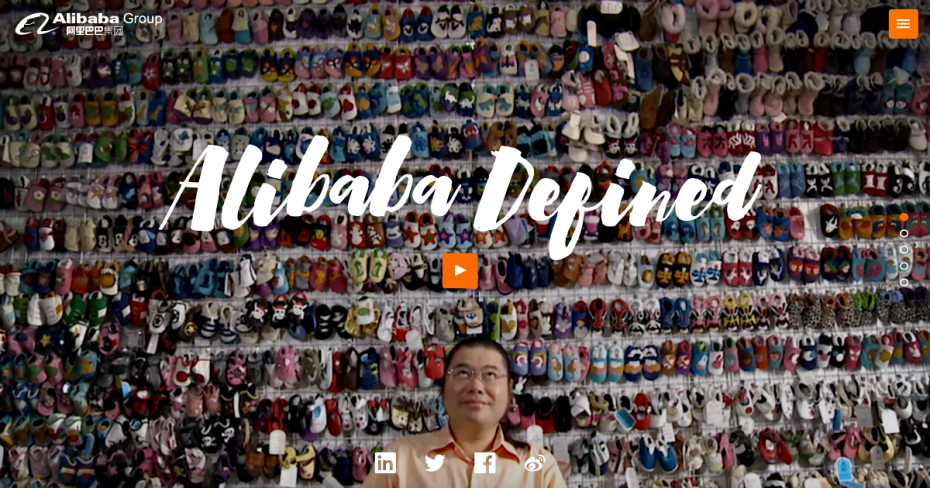 VSA's Anne-Marie Rosser was kind enough to take some time to discuss with AdForum's James Thompson the recent collaboration between VSA and Alibaba in developing Alibaba Defined, a comprehensive digital experience created by VSA Partners to help audiences outside of China understand the company.

AdForum: Even though the human race is more connected today than ever before, enduring misperceptions continue to impede many cross-cultural communication efforts. What challenges do Western cultures and America in particular, face when trying to fully understand the Alibaba brand and its role in an eclectic Chinese business culture?

VSA: Misperceptions about China can be summed up in 3 words: Made in China. It's a phrase that almost all American's are familiar with and associate with mass-produced consumer goods, and lower-cost labor. For many Americans, that's where their perception of "china + business" stops. So the challenge really is to take a step back and re-set the context for modern China. Modern China transcends mere manufacturing, and reflects a far more dynamic, innovative and entrepreneurial country and culture. The people of China have more opportunity today, and young people in particular have more disposable income than their parents did. A friend of mine, a lifelong New Yorker recently came back from a stint in Shanghai and reflected that "Shanghai makes New York look like a cowtown." People have a hard time visualizing this.

In terms of the challenges in helping Western audiences understand Alibaba, there is a tendency to want to use western references. So the media has tried to accelerate the learning curve by referencing other companies that actually have very different business models; Amazon, eBay, Google, etc. While it's understandable to want to use these as a shortcut to understanding Alibaba, it's ultimately a disservice. Alibaba is more far-reaching in its business lines than any of these models and more pervasive in the lives of Chinese people every day.

AdForum: Advertisers know that storytelling is an effective way to educate consumers about a brand. What aspects of Alibaba's story does VSA believe are most important to communicate to consumers and investors, and how did VSA integrate those storylines into Alibaba Defined?

VSA: You're right that storytelling is very important, and in fact, this is where we started with Alibaba. Before jumping into any kind of execution tactic, our team focused first on collaborating with Alibaba to extract and create the Alibaba narrative. We did extensive research, ran workshops with Alibaba, and then wrote several drafts of a long-form narrative as the ultimate Alibaba "story." This then became the foundation from which all other communication tactics could be derived, and Alibaba Defined is just one example of many.

In effect, the entire site reflects this larger narrative, with each of the five sections revealing a different part of the story we believe to be most relevant to western audiences. In particular, The New China and The Alibaba Experience section hew most closely to traditional story or narrative, where they break down the context for growth in China and showcase the Alibaba platform at work through easy-to-follow narrative vignettes.

AdForum: Globalization continues to influence international business on a more granular level, where entrepreneurs, startups, and small businesses are better able the harness the power of an interconnected world and economies. Can you please explain the creative thought process and inspiration for the "Founded in China, Created for the World" narrative that is an integral part of the Alibaba digital experience?"

VSA: There are parts of the Alibaba ecosystem that are truly global now and other parts where that is aspirational. In order to understand Alibaba's globalization strategy, it's really paramount to understand their mission. Alibaba is a mission-driven company with a very strong sense of purpose that is deeply ingrained in the company culture. The simplicity of the mission "to make it easy to do business anywhere" belies the sense of purpose that supports it. Alibaba strongly believes in leveling the playing field for small businesses—and that by doing so, they can create opportunity and prosperity for people everywhere. So the economic benefit is mutual, and it's something that they've already proven within China.

So that's where the concept of "Founded in China, Created for the World" really emanates. It's about reframing the perception of "Made in China" to something bigger and more meaningful. But it's something that won't happen overnight. Alibaba says that they are building the infrastructure for ecommerce in the future, but it will happen in stages, and that's what this part of the website depicts. The first section shows how Alibaba has already done this within China, connecting urban and rural areas. The next section shows how Alibaba is helping "Bring China to the World" by allowing people to source through its wholesales and retail platforms. "Bringing the World to China" shows how established brands have been able to accelerate sales in China to the rising middle class. And the aspiration is to continue to expand the connections Alibaba can make between buyers and sellers around the world—anywhere and at any size.

AdForum: The middle class in China composed of 300 million people—a staggering number considering the entire population of the United States is 318 million—is projected to double by 2022. What steps has VSA taken to position Alibaba as a conduit for foreign businesses to penetrate the complex Chinese marketplace and reach this enormous, and expanding, middle class?

VSA: Well, our role as an agency wasn't really to help foreign businesses penetrate China. Our role first and foremost was to convince investors and influencers of the true potential for growth within China, and demonstrate why Alibaba is uniquely positioned to drive growth. The section of the site called "The New China" really brings this to life. In this section, we use other markets such as the US and Europe to depict just how large the growth opportunity still is in China, in spite of an economic slowdown. This section of the site establishes the context for the growth, and then the "Founded in China, Created for the World" begins to introduce audiences, including foreign businesses, to the different ways that companies can access this market.

AdForum: What about the creative culture and talent at VSA makes it the ideal agency to work with Alibaba and bring its brand, services, and mission—clearly a huge undertaking—to consumers and investors around the globe through the Alibaba Defined initiative?

VSA: Well, our portfolio of creative work for companies like IBM, Harley-Davidson, Google and others puts us into the consideration set. But in this case, I think there were some really important drivers beyond past work that led to Alibaba selecting VSA.

We have process and methodologies, but we try not to have them be too rigid. We really try to start any engagement with a very specific understanding of the client and what they think their challenges are. Doing this allows us the freedom to change up our process and really partner with the client in the way that will work best for them. For example, Alibaba really wanted to make sure that whoever they worked with would respect the Chinese origins of the company, and not simply revert to western aesthetics. So we did a huge audit of modern Chinese graphics design, competitors, and the landscape in general to understand the differences from more western modes of communication. I think this step showed them that not only were we willing to do things differently, but we had a passion for solving for their unique issues.

I think VSA has great depth of talent in that our different disciplines care about understanding the company regardless of their specific area of expertise. And hopefully Alibaba saw this at multiple levels, and knew they had a team they could trust. Alibaba wanted our expertise, and wanted to hear our views—but they also wanted a great collaborator. And I think that's really the final and most important thing. The team we were working with in San Francisco was relatively new at the time, with the entire executive team in China. They wanted to know that they had a partner who was willing to stand next to them throughout the process, and could roll with whatever punches came our way. We really collaborated throughout to get this right, and there was just a lot of iteration to get there. It was really a pleasure, and our team is incredibly proud of the work and of the relationship.