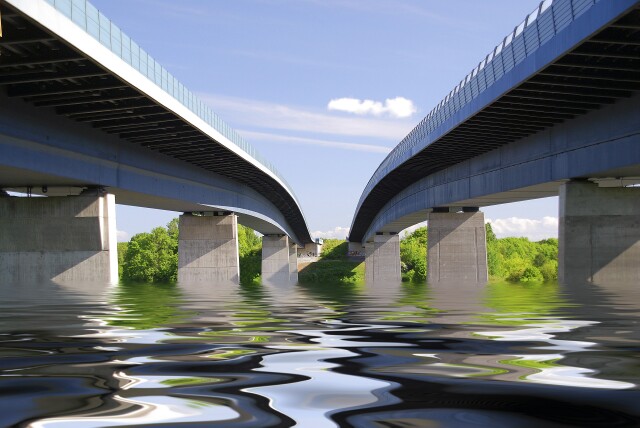 It's become a truism to say content is king, that brands need to be everywhere that content is consumed, and that data must drive decisions. Large media organizations are rarely nimble enough to offer sponsors all those capabilities, at least in a one-stop shop -- though The New York Times' T Brand Studios comes to mind. But A+E Networks has just launched The Bridge, an agency with a couple of key differences, and promises to do it all for their clients.

Newly named Managing Director, Lance Still, who won't quit her day job as Senior Vice President Branded Content for A+E, says: "The Bridge is guided by three pillars -- storytelling, analytics and distribution.  This and our purely agonistic approach differentiates us from other in-house agencies.

"Not only do we have storytellers within our own eco-system, between A+E Studios doing scripted content, films and original programming, and other in-house brands to work with, like our creative production studio, 45th and Dean, but we've also invested in Viceland, Epic, Propagate, Superb and others who each have a different secret sauce in telling stories," she continues. Add to that roster the networks' investment partners and inherited relationships in the world, such as Still's background in film content and production, and a wider berth of story tellers is on tap.

"We currently produce a tremendous amount of content for clients inside of A+E," says Executive Vice President of Ad Sales Peter Olsen. "Now picture a piece targeting Millennial women being produced by the editors of [sister brands] Cosmo or Elle; or an automotive partnership with content from Car & Driver. That brings just a little more authority to the party and something different from a typical TV story. We believe it pops on the screen more."

Agnostic problem solving drives their distribution approaches, as well.  "We have our in-house distribution system, and ecosystem of all the A+E networks and digital sites attached to them, but we also have things like our newly announced partnership with Hearst Digital to amplify our reach to key consumers, and the rest of the universe," says Still.

"What we keep hearing is that sponsors want as wide an application as possible," Olsen adds.  "The fact that we're willing to both use outside partners for storytelling and distribute both on and off our own platforms brings a better solution."

Lee Boykoff, Senior Vice President of Digital Analytics, acknowledges that "Great marketing has an art and science component and The Bridge brings that together. Targeting the right audience with the right message has been a fundamental of marketing for decades.  So A+E has been building 1:1 relationships with linear and digital viewers, mobile app users and fans in the social space. We leverage this differentiated first party data set in conjunction with third party data partners to align branded story telling with the client's target audience."

Analytics will also inform the creative from The Bridge.  Building targeted versions and monitoring performance lets the agency either double down or pull back on any platform placement.

Boykoff shared successful metrics for a campaign across linear and digital History Channel assets: a brand targeting outdoor enthusiasts enjoyed a 59% increase in new social media followers.  Boykoff's team also isolated existing History fans to show their engagement with the outdoor brand on Facebook which more than doubled during the campaign. 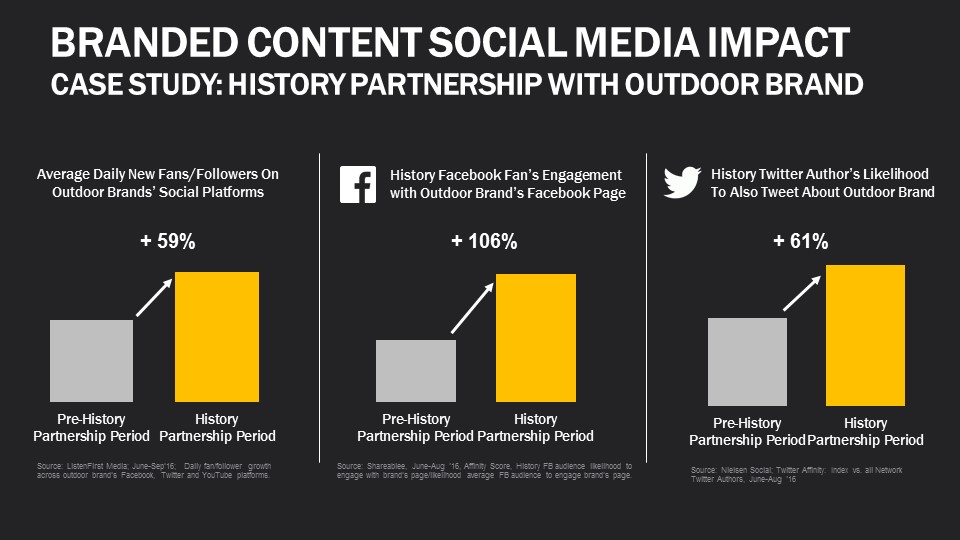 Beyond its use for performance or distribution, though, Olsen believes their analytics will also help deliver upon an even bigger goal: "cultural insights, for what kind of stories people want to hear and what's on trend with certain demographics."

One trending story with softer metrics occurred last month via a fast-turnaround campaign to promote a public service campaign for the Association of National Advertisers. The budding Bridge was able to extend the ANA's #SeeHer movement, which promotes the fair and 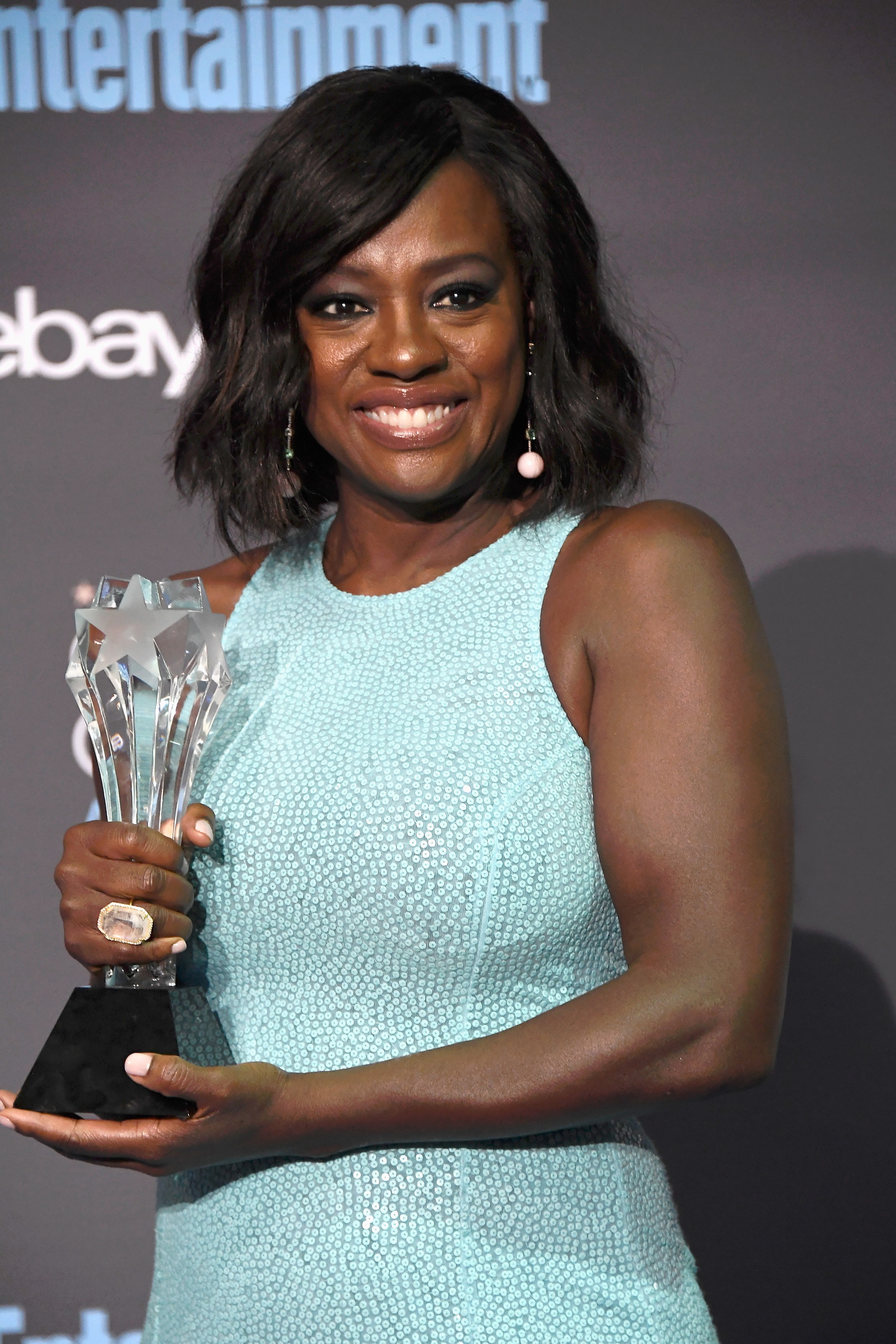 accurate portrayal of women in media and advertising, by aligning with The Critics' Choice Awards. The partnership led to the first-ever #SeeHer Award, and in just four weeks did everything from securing Amy Adams to present the honor to Viola Davis (at right), to executing a complete video and press package with hugely impactful press and social media results. The bonus was a sponsorship buy from several non-traditional advertisers.

Still emphasized that while it was not a big money maker for the agency, the pro-social activation was "the right thing to do," as well as an example of how nimble they can be in building that bridge to multiple partners and platforms. "Yes, revenue is important," she acknowledged, "but what's important is affecting our clients' bottom line and engagement. If we look at our portfolio a year from now we want to be proud of the content we're created and the needle we moved of consumer awareness and their conversation with the brand."

Olsen added, "it also illustrated how The Bridge can be a little surprising and be open-minded – even if for a 'longtail revenue game plan.'" Additional revenue streams will come in the form of agency commissions when The Bridge places ads for those smaller and mid-size brands who can benefit from A+E's media buying clout.

Photo Credit of Viola Davis - Frazer Harrison / Getty Images. The opinions and points of view expressed in this article are exclusively the views of the author and/or subject(s) and do not necessarily represent the views of MediaVillage.com/MyersBizNet, Inc. management or associated bloggers.