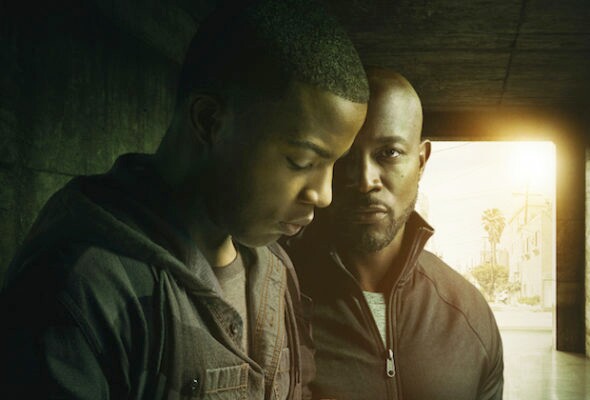 Whether you prefer to call it the Golden Age of television, Peak TV or, as FX Networks CEO John Landgraf recently termed it, the Gilded Age, the bottom line is there continues to be an overwhelming quantity of quality programming that shows no signs of slowing down.  Sifting through the multitude of new shows presented to advertisers at this spring's Upfronts and then at the TCA summer press tour, a number of fall and midseason programs have "see me, feel me" written all over them.  Here's a look at some of the shows I found to be most intriguing, based upon the vision of their creators, the talent involved and the subject matter.

All American  (The CW)

It's a fish out of water story reminiscent of 2009's The Blind Side, with a talented high school football player from South Central Los Angeles joining the team at a Beverly Hills high school under the tutelage of a coach played by Taye Diggs (pictured top right with Daniel Ezra).  Just as the film was based on the life of Michael Oher, this one is inspired by the experiences of NFL player Spencer Paysinger.

Anything Matt Weiner does after the phenomenal run of Mad Men is bound to deserve our full attention.  The anthology series -- Amazon's first -- features eight separate stories set in seven countries on three continents revolving around people who all believe they are descendants of the Russian royal family members who were infamously executed a century ago.

Before the current administration made this a near-daily occurrence, the fictional single motherhood of Candice Bergen's Murphy Brown became a seminal pop culture/political rallying cry when then-VP Dan Quayle railed against her and her lack of morals.  Now baby Avery is in his 20s and plays an investigative reporter on the new incarnation of the sitcom featuring many key players of the original cast.

Nathan Fillion's built-in fan base from Castle is bound to follow him as he plays a 40-year-old rookie in the LAPD whose young colleagues are not exactly thrilled to welcome him to their ranks.

It's a far cry from the over-the-top glitz of Empire as executive producer Danny Strong takes on the world of legal underdogs fighting for clients who have been wrongfully convicted of serious crimes.  Adding to the gravitas of often life-and-death proceedings, Kelsey Grammer plays their adversary, a tough-on-crime state's attorney and prosecutor.

First it was a Los Angeles Times investigative series, then a popular podcast.  Here, Connie Britton and Eric Bana bring the true crime story of a con man of the heart and his victim to the small screen.  The web of deceit and violence that eventually engulfed an entire family started when a divorcée turned to online dating to meet a love match.

Valley of the Boom  (National Geographic)

We all know who won the browser wars between Netscape and Microsoft, but this limited series takes us back to Silicon Valley of the 1990s when stock prices were going through the roof and Netscape represented the cool kids while Microsoft, like IBM before it, was the stodgy establishment play.  The drama also incorporates documentary interviews of key players during the dotcom 1.0 era of innovation and disruption.

If this is half as good as Monty Python member John Cleese's appearance via satellite at TCA, it'll be well worth watching.  He had the audience in stitches while responding to questions about his character on the show, where his humor came from and his thoughts on being older -- the latter being one of the topics touched upon in this multigenerational family comedy.

If you were always longing for an on-screen romance between Julia Roberts and Dermot Mulroney, you'll get that here.  But this is no rom-com.  It's a psychological thriller involving Roberts' character's mysterious work with returning veterans -- from a veteran of the genre, Mr. Robot's Sam Esmail.

The "kids" -- Martin Mull, Vicki Lawrence, David Alan Grier and Leslie Jordan -- are in their 70s, well north of Fox's typical demographic.  But the guys behind It's Always Sunny in Philadelphia, Charlie Day, Rob McElhenney and Glenn Howerton, are bringing their brand of humor to residents of a retirement community who have a lot of life left to live.

Director Robert Zemeckis explores top-secret government investigations into UFOs in the 1950s and 1960s through the eyes of the scientist who spearheaded the clandestine Air Force operation that looked into hundreds of cases of unidentified flying objects, many of which remain unsolved to this day.

As a longtime fan of The Voice, the mystery element of this music competition series based on a Korean format is appealing.  Just who is behind not only the mask but the elaborate costumes that completely disguise the performer?  Even host Nick Cannon and panelists Robin Thicke, Jenny McCarthy, Ken Jeong and Nicole Scherzinger are kept guessing.

There have been a number of TV and film projects of late about astronauts going to Mars, but none starring Sean Penn.  As for co-star Natascha McElhone, many may recall she appeared in the Steven Soderbergh 2002 space station sci-fi drama Solaris.  Another reason to tune in: it's Beau Willimon's first project after House of Cards.