By Simon Applebaum February 09, 2016 Tomorrow Will Be Televised Archives 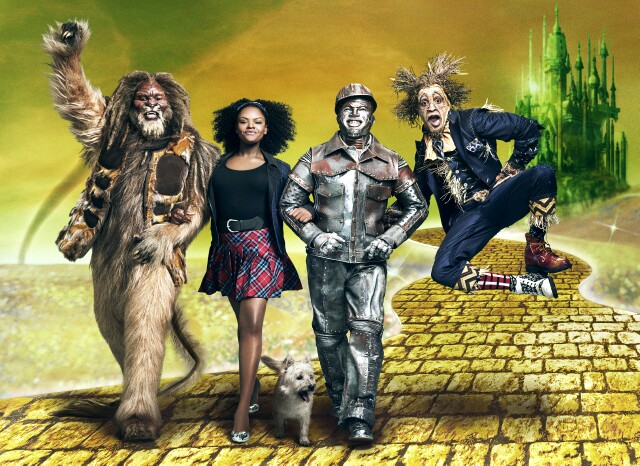 NBC did a sensational job with “The Wiz Live!” two months ago, by far the best of its live Broadway musical adaptations. Wonderful cast from top to bottom, dynamite direction and choreography and, despite not having a live audience in the studio to make the live performance more electric (the only major flaw, especially in the wake of “Grease Live!” on Fox), a triumph for all involved.

“The Wiz” (pictured at top) deserved to get a round of award nominations from various media organizations, and sure did in recent weeks -- Critics Choice Awards, Directors Guild of America Awards and the NAACP Image Awards to name three. Indeed, the program won two Image Awards this past Friday, one for the show itself and for co-star David Alan Grier.

But look at where the nominations were placed! In every organization’s awards “The Wiz” was up for outstanding made-for-TV movie, miniseries or dramatic special. Let's get something straight: “The Wiz Live!” was not a movie or limited series or a drama special. It was a live musical special and should have been recognized as such. Somehow, someone or some force dismissed the whole parameter of this category, clearly designed for made-for-TV movies, limited series and dramatic specials, and managed to place “The Wiz” in there without any resistance or challenge.

Did “The Wiz Live!” deserve nominations and awards? Unmistakably, yes -- in the Outstanding Variety Special category where it belonged!

What's also troubling is that no one from the awarding organizations has offered a public explanation of why “The Wiz Live!” was deemed eligible to get nominated as a made-for-TV movie, limited series or dramatic special. If an organization can't offer the rationale for it, especially when it has a variety category in place, why should viewers or the public trust it? What does this say to the creators and stars of made-for-TV movies, limited series or drama specials who now face the possibility that projects clearly not in their ballpark can horn in on nominations or awards?

Let's have that explanation, along with assurances that in the future, shows which clearly fit one category compete in that space, not take away from another. And when the primetime Emmy Awards announce their nominations this summer, here’s hoping the Academy of Television Arts & Sciences puts “The Wiz Live!” where it belongs.

Notes from the Passing Parade:

Orson Welles would probably have given a standing ovation to two great recent examples of virtual TV artistry. Just like the brilliant opening moments of his crime noir classic “Touch of Evil,” they both showcased the power and magic of one moving camera tracking the actions of one moving subject.

First example: Fox’s “Grease Live!” which did this not once but several times over the course of its three hours. Thanks to the handiwork of “Hamilton” wunderkind director Thomas Kali and “Dancing with the Stars” director Alex Rudzinski, Jessie J strutted down the Warner Bros. lot singing the title tune, while mixing it up with everyone from cast members to a Fox executive in one corridor, not to mention coping with the rain outdoors. (Will some network please give Jessie J her own variety series?) Much later on, Vanessa Hudgens as Rizzo scored a bullseye with her rendition of "There Are Worse Things I Could Do," all to a single skillful camera shot. Rudzinski, who continues to be bypassed for Emmy nominations because there's no directing category in the reality competition arena “Dancing” gets placed in, may finally have a shot at one … and maybe a win. Here’s hoping.

Second example: The modern dance performance near the end of last Wednesday's episode of “American Crime” on ABC. From the moment Felicity Hoffman's character steps out from the wings to address the audience through the performance and initial applause, that five-minute-plus span was captured by one camera with no editing or cutaways. As performed by NobleMotion, a dance company from Houston, Texas; directed by Rachel Morrison (in only her second TV episode, the first being a season one “American Crime” episode), and captured filmed by director of photography Lela Wiegand, it was one of the most powerful and haunting moments of television this year … and we're not even halfway into February.  Kudos to ABC and “American Crime” creator/executive producer John Ridley for letting us experience something so profound.