Aubrey Peeples and Sarah Dugdale on Lifetime's "Death of a Cheerleader" 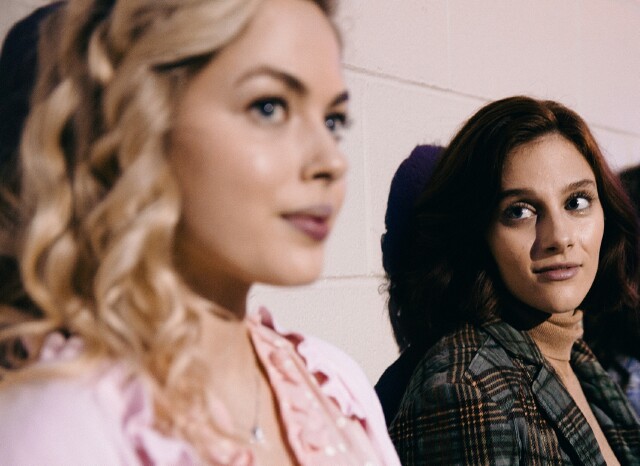 This weekend, Lifetime offers a new take on an old tale with the premiere of Death of a Cheerleader starring Aubrey Peeples and Sarah Dugdale.  Peeples plays Bridget Moretti, a shy overachiever from a lower-middle-class background who aspires to be popular and perfect at everything.  As she navigates the social hierarchy at her high school, Bridget attempts to befriend popular cheerleader Kelly Locke (Dugdale, pictured above left, opposite Peeples), leader of the school’s most prestigious clique, and cement her social status.  When things don’t go as planned, Bridget finds herself rejected and humiliated.  Fueled by jealousy and rage, and unable to contain her emotions, the teenager brutally murders her classmate in cold blood.  Inspired by a Rolling Stone article penned by Randall Sullivan, the 1984 events were first recounted in the 1994 television movie A Friend to Die For starring Kelly Martin and Tori Spelling that would go onto become a cult classic. " I wasn't really familiar with the original] at all," Peeples said when MediaVillage recently spoke to her and co-star Dugdale.  "It was very shocking to me, especially considering how young they were."

"I wasn't familiar with it either," added Dugdale.  "Just how brutal the murder [had been] was the most shocking thing to me.  And the fact it happened in such an affluent community of Northern California -- that shocked everyone."

The challenge of playing real-life characters attracted both actors to the project. "Playing a real person is exciting and doesn't happen too often," Dugdale explained.  "I feel because we are playing real people, and I was playing someone so brutally murdered at such a young age, that I had a real responsibility to give her spirit justice.  [My character] may come across as mean, and that 'popular girl,' but I really tried to find the reasons she was like that and humanize her; just make her a whole person.  I hope I did her justice.

"It's a big challenge as there's a lot of research,” she continued.  "But you also have to make it your own and it was really fulfilling to do all of that.  Then getting to do the cheers and dance.  I had never done anything like that before.  My mom was a cheerleader in the ‘80s and she sent me a picture of herself -- big hair and everything."

"I'd agree with Sarah," Peeples said.  "Except for the dancing.  I was very nervous about that and don't consider myself a dancer.  I danced when I was younger and considered myself the awkward, weird one.  I was just bad, but we pulled it off.  Editing can do wonders."

Despite the fact neither of them had seen the original TV movie, both leads did their homework with regards to their characters.  Mandatory was reading the original Rolling Stone article that inspired the film, along with reviewing the many true-crime documentaries available on the subject.  "Something super-interesting to me in researching the case was, all the reporting that surfaced in the 1980s really stereotyped these girls in many ways," said Peeples.  "It was very much ‘good-girl’ versus ‘bad,’ ‘popular’ versus ‘unpopular.’  Not a lot of attention was given to what might be going on mentally with my character Bridget, so I had to fill some gaps and put details together from her confession, and what her friends said about her to sort of make her more human than she appeared in the reports.

"Of course, nothing justifies what happened," she added.  "But I really wanted to explore what would drive a young girl to such extremes.  Clearly, there was a lot of insecurity, so I really wanted to sympathize with her in some way.  I think we both wanted to respect these characters, not just make them stereotypes, and make them real."

While times have changed since the events of the murder, both actors agree that even in this day and social media age, the harrowing events depicted remain relevant.  "I really believe it could happen today," offered Dugdale.  "People are still under the same pressures and insecurities and women still seem to be pitted against one another.  But I feel mental health awareness is bigger now and not as stigmatized, so people can talk about it … which might prevent something like this happening again."

"It is possible [today] she may have found an online connection and a support group," said Peeples.  "It can go two ways, but I see a lot of people finding communities online which can be a beautiful aspect to social media, although it’s not always that way."

Also appearing in the film is Kellie Martin (who played Peebles’ character in the original TV movie), this time as the FBI agent who cracks the case.  Peeples was elated with the homage to the original.  "We only had Kelly for one day, so there wasn't a lot of time [to quiz her]," she recalled.  "But she was so lovely and that one scene with her, [despite being] so heartbreaking, was wonderful to shoot."

Death of a Cheerleaderwill be telecast Saturday, February 2 at 8 p.m. on Lifetime.