BET Will "Bring the Party to the People": Upfront News and Views 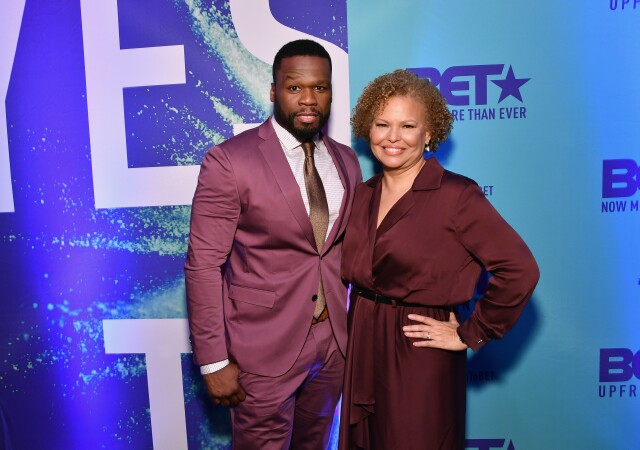 Of the six services Viacom now labels “core,” half went the event route this Upfront season.  Nickelodeon/Nick Jr. kicked things off in early March, while BET had its turn last Thursday night.

Venue:  Playstation Theater on W. 44th St. near Broadway.  Yes, this is the below-the-street showplace that gets a change of sponsor in the title every few years (Nokia and Best Buy among them).  What remains stable is the lavish subterranean environment outside the theater space itself -- in this case bars all around and a DJ booth near the escalators to the street.  At this event, the front area of the theater was filled with plush comfy sofas facing a stage with an enormous screen displaying the network's motto "Yes To BET" in a number of animated ways (incorporating stardust, blue puffy smoke and multi-color splashes).  Water bottles were under all the seats and sofas.  Grade: 4 Jacks 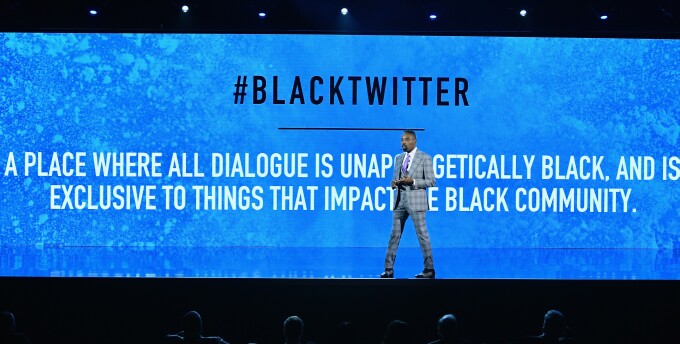 Presentation:  With the designation by parent Viacom that BET is considered one of its “core” networks highlighted right at the start, network executives proceeded to work two messages to the max.  First, if advertisers want to reach the most African-American viewers, BET is the place. Second, this network will reward its audience with more original programming than ever before while respecting their culture and tastes.  "What is our role?" BET Media Sales President Louis Carr (above) asked.  "Be the guardian of black history.  Be the igniter of black dreams.  [Our audience] wants us to shine a light on an issue, or show accomplishments.  They want us to be the heartbeat of black culture.  You won't hear this presented on any stage at any Upfront."  At one point Carr made his presentation interactive, asking the entire audience to tweet the hashtag #YesToBET.”  For this coming season and beyond, original content will strive to be relevant, radically bold, dope and fun, promised Chairman and CEO Debra Lee (pictured at top with Curtis "50 Cent" Jackson).  "We'll bring the party to the people," she declared.  A variety of video clips, all well-edited and paced, elaborated on both messages.  Grade: 4.5 Jacks 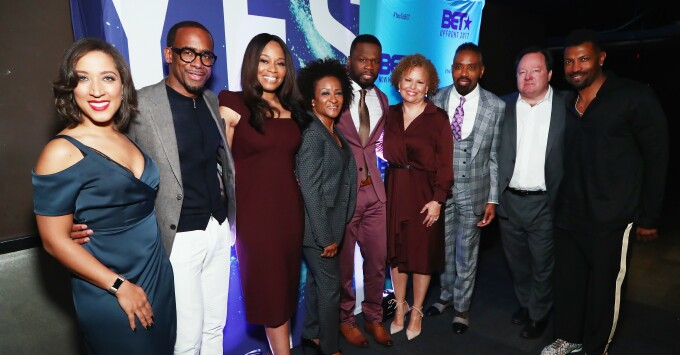 News:  A mind-boggling amount.  For the first time in many years, BET will introduce a variety of originals throughout its evening schedule, in late night as well as primetime.  That adds up to 47 percent more first-run hours this year over last, Lee said.  What's more, the new late-night series will have formidable celebrities aboard as executive producers, including Chris Rock, Steve Harvey and Wanda Sykes. Two series will move from VH1's primetime lineup to BET later this year -- The Breaks for its second season, Hit the Floor for its fourth (delayed for more than a year).  Kevin Hart will executive produce the new half-hour comedy Divorce Saved My Marriage, while the producers of VH1's Love & Hip Hop bring forward unscripted hour Love Room.  Following the success of The New Edition Story, at least two more primetime limited series are planned (four-hour The Bobby Brown Story over two nights, and six-hour documentary Death Row Chronicles, dealing with the controversial record label).  Spike's popular Lip Sync Battle will tape two special episodes this September, connected to BET's Hip Hop and Soul Train Awards, respectively.  The new late-night roster (days/times to be announced later) include The Rundown with Robin Thede (from Rock), Mancave (from Harvey), Face Value (from Sykes) and 50 Central (the Curtis "50 Cent" Jackson-organized variety series originally under development at A&E).  Separately, sister channel Centric will become BET Her on October 1, reinforcing the service's target audience of African-American women 25-54.  Full details on that reboot are forthcoming.  (Special note: The departure of long-time programming chief Stephen Hill and a key executive on his team a few weeks ago may have impacted how much BET could share about new originals or what's under development.  Don't be surprised if more 2017-18 primetime series are announced when new programming leadership takes command.)  Grade: 5 Jacks  (Pictured above, left to right: Actress and comedienne Robin Thede, TV personality Jeff Johnson, BET Senior Vice President of Music and Specials Connie Orlando, Wanda Sykes, Curtis "50 Cent" Jackson, Debra Lee, Louis Carr and actor Deon Cole.)

Host:  Lee, getting more stage time than usual due to Hill's exit, displayed class and fun on the fly, while Carr (celebrating his 15th Upfront presentation) continued his streak as one of the most effective and fashionable speakers of any Upfront season.  (We're still waiting for him to host his own series.  He’s a natural.)  Both Lee and Carr were supported in the funny department by turns from Thede and Sykes. Grade: 4 Jacks 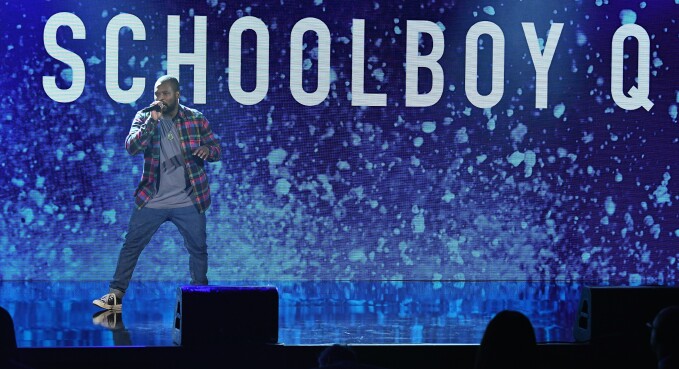 Star Time:  Rapper Schoolboy Q (pictured above) commanded the stage and, for an extended time, the front rows, pulling executives into his performance.  Who knew that Viacom CEO Bob Bakish has got moves?  Grade: 4 Jacks

Cuisine:  Mix of after-presentation appetizers and a taco station near one exit.  Best eats: tomato pizza slices and pulled pork/mushroom/chicken tacos.  Worst eat: the taco shell itself.  Worse than bland, especially without juice or sauce from the chicken or pork to liven the taste.  Could have used that Asian BBQ dressing from Freeform's event.  Grade: 2 Jacks (Note:  Cuisine ratings do not figure into the overall Jacks grade.)

Innovative Opportunity:  Participation in and following a study of black culture involving Twitter.  The study will get underway next month and disseminate results at a special BET/Twitter joint event in June. Grade: 3.5 Jacks

Overall Grade: 4 Jacks Clear messaging and a variety of new content offerings on display throughout, presented in an entertaining manner.

Another special note:  Sooner or later, it was bound to happen -- yours truly experienced an Andy Warhol moment of Upfront fame ... or infamy … when Wanda Sykes pointed me out in the middle of her routine.  Here's how it went down:

Sykes: You married?
Me: No.
Sykes: Mother issues. (Audience laughter)
Person to My Right:  Give her 5 Jacks!