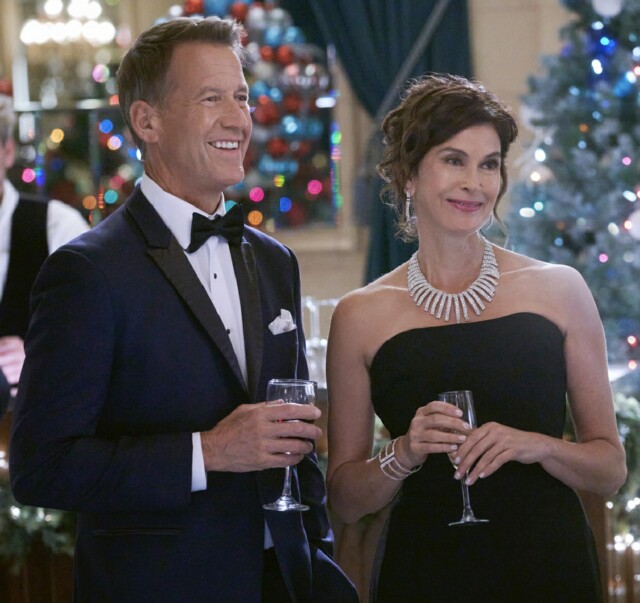 Fans of ABC's Desperate Housewives are in for a treat this weekend when one of that series' favorite couples, Susan and Mike Delfino (Teri Hatcher and James Denton), reunite for Hallmark Channel's A Kiss Before Christmas, co-starring Marilu Henner. It's been nine years since that series left the airwaves, and after working closely together for much of its 2004-2012 run, they have remained firm friends. To say the re-teaming is anything but "Lucy and Ricky Epic" is an understatement, and something I conveyed to both actors during their exclusive interview with MediaVillage. "The words epic, and Lucy, and Ricky!" laughed Hatcher of the comparison. "Yeah, you just [gave us] the biggest compliment ever, so thank you so much."

When she signed onto the project (at Denton's invitation), Hatcher had an inkling news of the two working together again might spark some interest -- just not how much. "I definitely thought this would be a big deal for the serious Desperate Housewives fans," she admitted. "I feel they were gipped out of a happy ending for Susan and Mike. I was mindful of the idea that those fans might like to see us together, alive and well, playing different characters, yet still able to sort of vicariously live, through this movie, a sort of happy ending they could enjoy. That was our intention. But with that said, I think the reaction seems to be bigger than even I anticipated."

"It's been pretty amazing," concurred Denton. "I came to Teri with this idea because I wanted to do it with her. The female lead role in this [movie] is very taxing. She plays two very different sides to this character, and I wanted it to be somebody that I trusted and knew could really act. I hoped we would get some attention as well, but really, I just wanted her as an actress, so all the attention has been a great fringe benefit."

In the film (executive produced by him and based on his idea) Denton portrays real estate developer Ethan Holt, a happily married father of two adopted children who is at a career, and life, crossroads. Despite his good fortune, he finds himself pondering what his life trajectory might have been had he not encountered his wife Joyce (Hatcher) in an elevator 20 years prior. Thanks to an unexpected encounter with a mysterious wish-granting Santa figure, he need wonder no more, and finds himself immersed in an alternate universe where he's successful, single and childless -- and Joyce is his worst enemy. As the Christmas clock counts down, Ethan must gain Joyce's trust before he completely loses his old life and his memories of it. 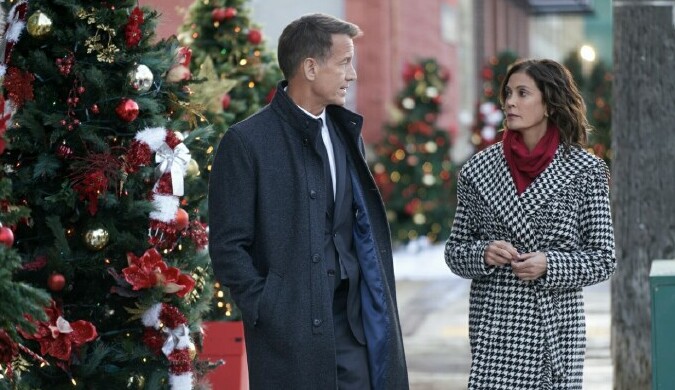 There's a line in the film where Denton, as Ethan, admits to Joyce, "I need someone I can trust" -- and the irony of life imitating art when asking Hatcher to join him on the project wasn't lost. "It's funny," Denton mused. "There was one emotional scene in particular for my character where I was struggling to get it right. Teri and I talked about how much our history helps, along with our chemistry, and comfort level, so thank God I was working with her, because she was able to tell me exactly what I needed and almost kind of coach me through it as a friend. It worked great. You don't get that with a lot of other actors. Having that comfort level … it's very valuable and huge!"

Accepting the offer to co-star with Denton, Hatcher says, was a rare and almost instant yes. "I love to work, but I feel blessed to be in a position where I can pick what I want to be involved in," she reflected. "I like to be challenged, work in good situations, and put out entertainment I feel is meaningful. So, this was an obvious, very quick yes! The combination of a happy Christmas movie, working with James, and reuniting for the Desperate Housewives fans, was a pretty great full bucket of reasons to do this."

"I don't know how I would have done it without Teri," added Denton. "When I brought the idea to Hallmark, the writer, Mark Amato, and I sat down and tried to [devise] something age-appropriate. Most Hallmark leads are in their 30s, and for a guy at my point in life, this was perfect. But I actually said, 'If we don't get Teri, I don't want to do it.' We might have tried to keep it going, but my first thought was if she says 'no' we need to go to another script."

Given the movie's "what if" theme, both actors admitted to reflecting on the choices that led them to Hallmark in 2021, and how had they not made the decision to do Desperate Housewives years ago, A Kiss Before Christmas wouldn't exist. "We did think about that," Denton shared. "I'd done a few shows for ABC that didn't go. I was starting to think, 'This isn't working.' There was no Marc Cherry, who I believe brought scripted drama back at the time Who Wants to Be a Millionaire aired four nights a week. I thought Desperate Housewives might be a reality show, but thank God my manager talked me into doing it. I was so close to saying, 'No, I'm tired of shows getting canceled.' Teri and I talked about this while shooting the pilot, and how we hoped people would watch."

"I felt different in that I thought it was one of the best pilot scripts I'd ever read," added Hatcher. "I loved the Susan character, and all the characters, so I didn't have any doubt about wanting to be a part of it. That said, there are a lot of good pilots that get made and for whatever reason don't get put in the right time slot, or on at all. There's more than just [having] a good script for something to come together and take off. I am so lucky that we did it, and so lucky we met and worked perfectly together from the beginning."

A Kiss Before Christmas is destined to become a holiday classic and makes a wonderful addition to the extensive body of work Denton has already done for Hallmark under his current contract. "I have one more movie in my original deal," he explained. "I'll probably do that this spring. Ideas for it are being bounced around. But we both think there's a sequel in this. I mean there's a Joyce [character] at the end of the movie that should be explored."

For Hatcher, who is making her Hallmark Christmas movie debut, should a sequel or something equally as enticing present itself, it's another yes! "I would definitely do a sequel to this movie," she said. "I was the only person in the world who wasn't aware of the entire Christmas extravaganza that happens at Hallmark every year. But now that I'm part of the family, I'm very aware. I've also been baking cookies with Hallmark Christmas movies in the background!

"I like the idea of James and I getting to do something for them maybe once a year," she added in closing. "It would be really fun if we can figure that out. They are really lovely to their actors and seem to care a lot about their viewers, so I'm having a good time with my initial foray into the Hallmark world."

A Kiss Before Christmas will be telecast Sunday, November 21 at 8 p.m. on Hallmark Channel as part of their annual Countdown to Christmas programming event.