Ewan McGregor on His Two Roles in FX's "Fargo" 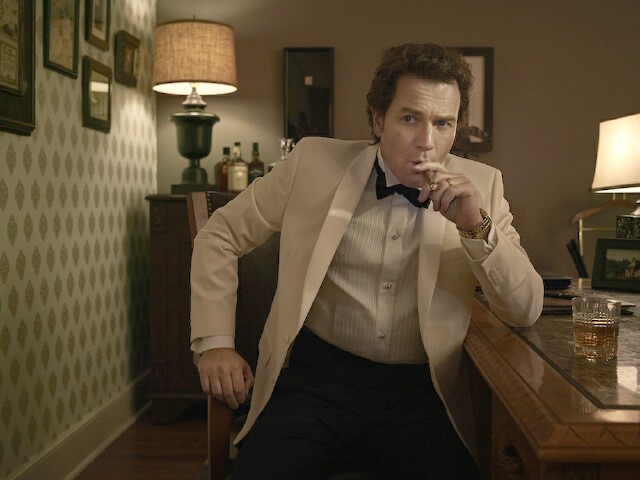 What does it take to bring Ewan McGregor to the small screen?  “Something special,” he recently told me.  He was referring to FX’s Fargo, which begins its third season on Wednesday.  McGregor’s name is synonymous with the big screen, thanks to hit films and franchises like Trainspotting, Moulin Rouge and the three Star Wars prequels (where he took on the role of a young Obi Wan Kenobi, the Jedi master famously portrayed in the first three movies by Sir Alec Guinness).  Most recently he gave voice to Lumiere in Disney’s live action version of Beauty and the Beast, but the lure of television was something the 46-year-old had been eyeing for some time.  Playing the lead roles in Fargo – brothers Emmett and Raymond Stussy -- did the trick.

“The writing is so very good and the flavor of it was exactly what I want to be doing,” McGregor said. “It’s interesting coming into something in its third season. But the first two seasons were so very good, it was tempting. I knew and trusted the writing and the creators. I can look at their work and see that it’s really good.”

McGregor has taken on a lot here, as Emmett and Raymond are in many scenes together and have a contentious relationship.  Emmett (photo at top) is a well-to-do businessman, Ray a disgruntled parole officer. Playing dual roles was something McGregor’s Star Wars counterpart Sir Alec Guinness famously did in 1959’s The Scapegoat alongside Bette Davis (who did the same in 1946’s A Stolen Life and 1964’s Dead Ringer), a fact not lost on the actor who took a page from Guinness’ acting manual.  “I think Alec always said -- well this is the legend anyway -- that you find the character’s shoes first and work up from there,” McGregor said.

“I think you have to look inward at the character,” he continued. “So you’re really looking inside out. I really tried to find the souls of the characters, no pun intended, and then the focus on who these two people are.  These two characters were very appealing to me.”

Fargo isn’t McGregor’s first foray onto the small screen. In 2015 he joined the cast of HBO’s The Corrections, a pilot adapted from the Jonathan Franzen novel of the same name. (The cast also included Maggie Gyllenhaal, Dianne Wiest and Chris Cooper.)  “It didn’t get the go-ahead, they didn’t pick it up” McGregor noted. “But as a film actor that’s when I made my decision to go into television, and since then my eyes have been opened as to what’s around.”

One thing McGregor took in his stride while filming Fargo were the often-harsh location filming conditions he endured while bald. Yes, he shaved his head to accommodate the wigs required for both brother roles. “Below 40 degrees is when things become inoperable, anything up to that is fair play, I think?” he laughed.

“It isn’t really miserable; it’s actually really beautiful,” he continued. “The countryside [where we filmed] is gorgeous and the temperatures may be extreme, but it’s not like standing in the rain in Glasgow for four hours, which in a way is way worse. I don’t know why, but -20 degrees and blue skies and snow really isn’t too bad.”

However, he did recall one incident while on a brisk morning walk that almost had detrimental effects. “I walked a couple of blocks one day and I thought maybe I was doing something permanently bad to my face because it was so cold,” he revealed. “I started feeling weird. My eyes were going weird so I hopped into a furniture shop just to let my face thaw out.”

Sadly, one thing McGregor “didn’t get the memo on” when it came to Fargo was double pay for playing two parts -- something in retrospect he wishes he had considered.  “I’ll tell you, there is double the learning because Fargo is quite wordy,” he shared.  “And we shoot an hour episode in eight days so there’s a lot of learning involved.

“[The way] Fargo is written nobody finishes sentences,” he added.  “It’s very broken up and very particular.  If you don’t learn it exactly, it doesn’t sound right.  [The show] was a monster project; when [I wasn’t] working, [I was] at home learning lines.”

Given his positive experience on Fargo, McGregor admits, should the right projects come along, he’s not averse to becoming a small screen fixture.  “I think now you’re looking for work that satisfies you and work you feel reflects you as an actor,” he mused.  “It really doesn’t matter what it is anymore; I danced between theater and film and will absolutely do the same with television.”

McGregor also said that another musical, a genre he tackled head on with Moulin Rouge, wouldn’t be out of the question, either.  While working on Beauty and the Beast and was thrilled to provide vocals for the films signature tune “Be Our Guest.”

“I love [musicals],” he enthused.  “I’m a very musical person. I love singing and dancing.  It’s very much in my wheelhouse.  Expressing yourself through song is a very effective way.  If you sing ‘I love you’ to someone, especially with a full orchestra behind you, it’s very powerful.  It’s hard to get that feeling by just saying the words, although we do try to.  I would totally be up for [another musical] and I really hope that happens.”

Season 3 of Fargo is telecast Wednesday at 10 p.m. ET on FX.