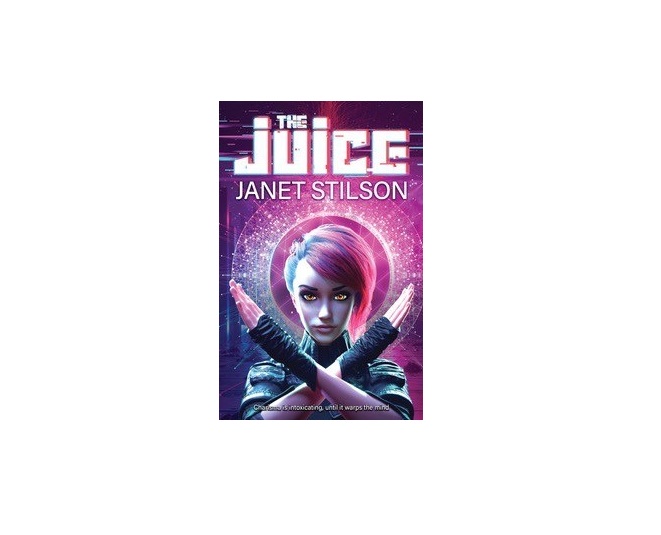 Have you ever wondered what it would be like to roam the corridors of giant media companies a few decades into the future? That "world" is at the heart of The Juice, a sci-fi novel by longtime media journalist Janet Stilson. In her dystopian, cyberpunk tale, a government-controlled media company uses a secret substance to tighten its grip on the public's thought patterns. And three unlikely allies come together to stop it -- a dirt-poor, fearless teen; a rebel tech-head, and an ambitious, tough executive.

Dragon Moon Press released The Juice today, February 9,  and it's available for order. Below is an excerpt from the novel's third chapter, told from the standpoint of one particular protagonist, the media executive.

I sailed on silver air shoes about two feet off the ground toward Victory Star, the second-largest media corporation in the world. Tiny paparazzi drones zinged around me like mosquitoes, taking in my skirt, which shimmered with an ocean video in gray and green.

"Stop getting tangled in your panties," I purred into my mobile. "I think your client is bloody brilliant. He's worth 10 times more than the co-star. No, no. Make that 20 times. He deserves as much money as I'd pay Jesus Christ if he were still living. They'd be about the same age now, wouldn't they?"

The jabbering laughter on the other end of the call told me that I was making some headway with the agent rep for Wilder. He was an actor that Victory wanted for a new series, as long as the price made sense. A bit long-in-the-tooth, but Wilder still made about 35 billion girls smile, according to my intel. And I was one of them, not that I'd let that out in this call.

They called me President of Entertainment and Information at Victory, but that was just a fancy way of saying chief talent wrangler. And there was no way I was paying any more for Wilder than I was for LaceUp, the delicious ball-o'-fire that would be his love interest once his agent stopped dicking around.

The drones were zinging in closely, dying to know who I was chatting up. In fact, if they buzzed any closer to my ear, I might smush a few. But I kept up my bright, carefree tone as I moved into the wrap-up. "It's been lovely speaking, but here's the thing: you have 24 hours to get him to say yes to the terms as previously stated, or we're moving on … No, that's the best I can do. I know you can do this … Cheers!"

I swiped off the call and gave the drones a big smile. "Morning!" I sang out, addressing the news people who controlled them, operating from various office cubicles around the world. Probably a few of them were in Victory's own offices. As curious as the drone operators were about my call, they were mostly there for another reason: to capture images of Victory's star talent. From time to time, they drifted into the giant carved-quartz main entrance to Victory for various performances—people I'd made famous over the years.

The 200-story building, located on the southern tip of Manhattan, was home to nearly 400 studios for holographic productions and distributed thousands of series and games. We also had a robust product line of best-selling bots that included baby dolls, mischievous little monsters, and musicians for teen garage bands. The whole content portfolio was served up in 300 different languages all over the world and some outposts in space. Once in a while, it gave me a swell of pride: knowing that I was one of the main people that made all that happen. But mostly, dealing with so many overinflated egos across the negotiating table made me immune to that sort of thing. It was more important to just get things done, and I was impatient to accomplish one particular thing that day.

I slipped into an elevator reserved for C-suite executives, just to the right of the main entrance. No sooner had my chariot flown past the 10th floor than a man sprang up beside me. I gasped. He was just a hologram, but he was wearing swimming trunks so small they barely covered his wanger, which looked to be substantial. His bronzed physique reminded me of a surfer, and that rust-black hair looked gnawed upon—just the sort of thing that turned me crazy.

"Oh, Petra Cardinale, you are such a nasty girl," he growled. His accent was flavored with Brazilian Portuguese, and his lips looked swollen, as if from too much kissing. They were riveting.

I forced myself back to sanity. "Disappear. Now."

He just came closer. "What do you want? A little boy? A little girl?"

I blushed angrily, to have my secret exposed. A logo appeared over his head for Seven Beaches, a stud resort off the coast of Brazil. So that was where he was from. "I will nail Seven Beaches to the cross. Leave. Now!"

The image popped into nothingness. Relief flooded over me.

The vision was obviously triggered by Kogeny, which was a research system that collected enough data on the behavior of people to predict what they desired. It frequently anticipated "wants" before people had even begun to wish for them.

My tolerance for Kogeny was very limited, and this promo had gone way too far. How dare those Seven Beaches sleaze bags violate my privacy that way—exposing my sexual triggers and deepest secrets. And to be targeted in a Victory top-brass elevator! That was strictly forbidden.

There was no time for anger. The meeting I was about to go into required a very calm state of mind. Relax a little. Trust a little, I told myself, as I had so many other times. The elevator hung a left at the 198th floor, then slid horizontally, stopping before a door with a discreet little sign. It read: Rico Reingold, Executive Vice President of Creative Sciences, Technology and Artificial Intelligence.

The opening dissolved into glittering light, and I entered a luminous white reception area. The air was chilled and let off a faint grapey scent, like a Bordeaux vineyard on a crisp September day.

"Okay." Was one supposed to thank a wall? Some people did, but really!