George Newbern of ABC's “Scandal”: Forever a Friend of “Friends” 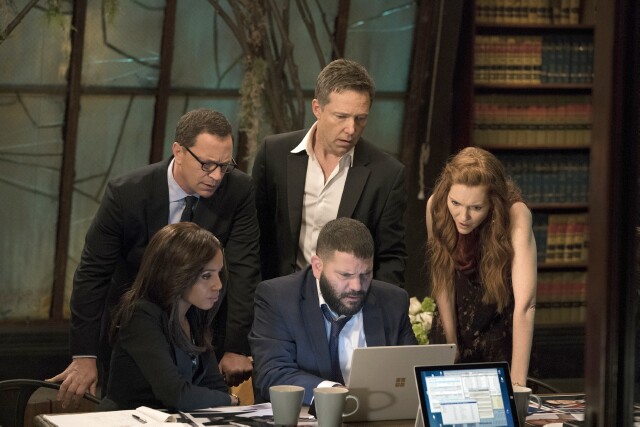 (Editor's note:  This column was originally published on November 15, 2017.)  The looming conclusion to one of ABC’s longest-running dramas is certainly bittersweet for one of its cast members.  For their final season, the producers of Scandal decided to make George Newbern a series regular, although to fans of the show it appeared he already was after six years as a recurring character -- super spy Charlie.  “Yeah they finally made me a Scandal regular, which is great,” Newbern laughed when we recently spoke.  “It only took me 63 episodes and unfortunately it's the last year, but we are having a good time.  The writing [this season] is really intense.”  (Pictured above: Newbern standing at center with his "new" co-stars Kerry Washington, Joshua Malina, Guillermo Diaz and Darby Stanchfield.)

Long before Newbern became a resident of Shondaland he was familiar to viewers through his numerous appearances on TV comedies like Designing Women (as Payne, Dixie Carter’s son) and Working Girl (the series adapted from the hit movie) as well as his big screen work.  Yet despite having an extensive list of credits, there’s one memorable guest role the now 52-year-old is recognized for more than anything else, and considering he was unrecognizable for part of it, he’s pleasantly surprised.  “Who can forget Danny?” he exclaimed with a laugh.  “Yeti on Friends!” 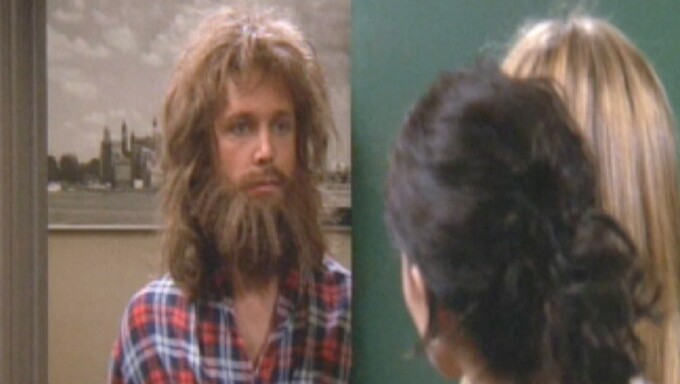 In the season five episode, The One with the Yeti, Newbern started the first of a two-part arc playing Danny, a new neighbor to Monica, Rachel, Joey and friends.  Hidden under four months of facial hair growth (following a trek through the Andes) Danny startles Rachel (Jennifer Aniston) and Monica (Courteney Cox) in the basement of their apartment building.  After the gals bug-bomb him, they’re forced to apologize and a potential romance with Rachel ensues.

“But we both took different shows,” he continued.  “All of those shows were by James Burroughs, who directed all the pilots.  Mine went [to series], Friends went and Craig's didn't go.  So that was hilarious.  I guess Friends executive producer Marta Kauffman remembered me and she brought me in to do that part.”

Sadly, the series Newbern took was canceled after a few episodes.  Years later he was thrilled to land the part of Danny, as he was a huge fan of the show. “When I originally read the script I thought this thing sounded pretty good,” he recalled.  “At that time they'd been trying to make that kind of show for a long time and that show was cast so brilliantly that it exploded.  Right away you knew it was special and really great.”

Newbern's pre-existing “friendships” with two of the Friends wasn't his only connection with the show's cast.  “Lisa Kudrow was actually my Groundlings teacher right before I was supposed to test for Friends,” he said.   “Oddly she abruptly left the class a few [of my] classes in.  She just was gone.  I was like, ‘Where did Lisa go?’  Then I heard she got a pilot was like, ‘okay.’

“She remembered me when I showed up though,” he added. “Well, remembered-ish, but now I know her well through her [producing] partner Dan Bucatinsky, who was on Scandal with me!  So it's a very small world.  It seems all roads lead to Friends.”

In addition to his on-screen work, Newburn can also be heard as the voice of Superman in the animated version of Warner Bros. Justice League.  It’s a part that introduced him to the world of conventions and also helped reveal just how deep his Friends fandom is.  “I was going to go to some conventions and for the hell of it in I printed up a Danny yeti picture,” he smiled.  “More people wanted that autographed photo than anything else.  I couldn't believe it.  It's so nice to have been a part of that show.  I get recognized for that constantly.  The arc of that character was, he started out as a yeti, was involved with Rachel – and then I ended up hitting on my sister!  It was the weirdest arc ever.  Super weird!  Maybe that's why he's so memorable?”

Newburn still appreciates the $200 residual check he receives every now and then.  “It sure beats working at McDonald's, but that's sort of been my life as an actor -- always being the guy that's been around forever and keeps popping up,” he said.  “I'm very grateful.”

This is the latest in Steve Gidlow’s recurring series of interviews with actors who guest-starred on the iconic sitcom Friends.  He has also interviewed Friends alumni Penn Jillette, Eddie Cahill, Leah Remini and Anna Faris.