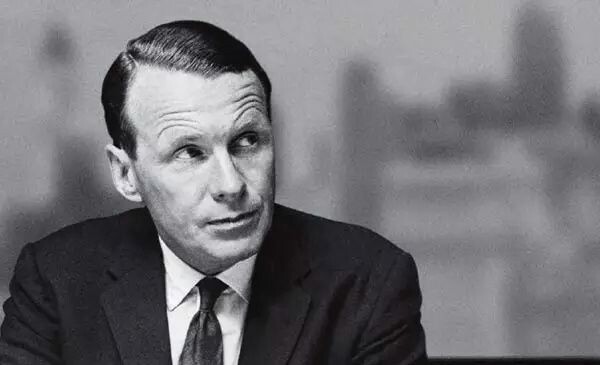 This summer marks 20 years since the world lost the “Father of Advertising,”  David Ogilvy, who died on July 21, 1999.  Along with Bill Bernbach, who was also a competitor, Ogilvy was a leader in the postwar transformation of his business, which saw ads shift from boring and repetitive boasts about a product’s attributes and utility to creative, often whimsical evocations of what a product could accomplish.  “You cannot bore people into buying your product,” he once said.  “You can only interest them in buying it.”

Born in England and successful in America, he revolutionized advertising around the world during his four decades in the business and, along the way, bought himself a retirement castle, Château de Touffou, in western France (where he passed away). Some of his most famous creations were the eyepatch-wearing man in the Hathaway shirt; the bewhiskered Englishman, Commander Whitehead, pitching Schweppes tonic water and its “Schweppervesence” (he was a real person, that was his real name and he was a senior leader at Schweppes who had served in the Royal Navy), and the claim that “at 60 miles an hour, the loudest noise in this new Rolls-Royce comes from the electric clock.”

He once enlisted Eleanor Roosevelt to appear in an ad for margarine.

A bon vivant and iconoclast, Ogilvy also believed in using the products he pitched. “This is not toadyism, but elementary good manners,” he wrote in his memoir, Confessions of an Advertising Man. He was known to resign from an account if he thought the products weren’t up to snuff. In the early 1960s, despite that famous ad, he fired Rolls-Royce as a client. (Two years later, he picked up Mercedes-Benz.)

Although he built the global advertising network that today still bears his name -- for many years, its logo also bore his signature -- Ogilvy was a latecomer to the business. He liked to say that he wrote his first ad at age 39. Born in Surrey, England, he left Oxford University without a degree and went to work as an apprentice chef at the Majestic Hotel in Paris, where he learned that running a great kitchen was like running great agency: they both required hard work, discipline and the pursuit of excellence. He left there to go sell stoves in Scotland, where he was such a success that the company asked him to write a guide for their other salesmen. Then, in 1938, he came to America to work for George Gallup, the father of the Gallup Poll, which cemented his belief in the power of research. After World War II, he and his wife bought a farm in Pennsylvania, but life as a gentleman farmer did not pan out.

According to his memoir, in 1948, with “no clients, no credentials, and only $6,000 in the bank,” Ogilvy launched Hewitt, Ogilvy, Benson & Mather with support from Mather & Crowther, a London-based agency his brother helped lead. He knew how to leverage his Britishness, his iconoclasm and his great creativity. The first big account was Sun Oil. The 1950s brought Hathaway and Schweppes. The agency created the idea of Puerto Rico as a tropical tourism destination, and it also won business from Lever Brothers, American Express, General Foods and Sears. Ogilvy became a much sought-after industry leader. By 1964, Hewitt and Benson were gone from the nameplate, and the agency became Ogilvy & Mather. David Ogilvy would build it into an international powerhouse.

In 1966, the company went public and Ogilvy became rich. It’s an expensive privilege, after all, to die at your French château.) In 1989, Martin Sorrell, having acquired enough of those public shares, took over the company for his WPP group. Ogilvy, already retired, famously called Sorrell “an odious little shit.” The two ultimately patched things up and Ogilvy accepted the title of WPP chairman. In the end, he’d probably be considered the winner. Today, the Ogilvy & Mather network still exists around the world and David Ogilvy’s name and signature red color still adorn each outpost of that empire.