HISTORY’s Moment in Media: Barbara Walters' Made Headlines on the Evening News 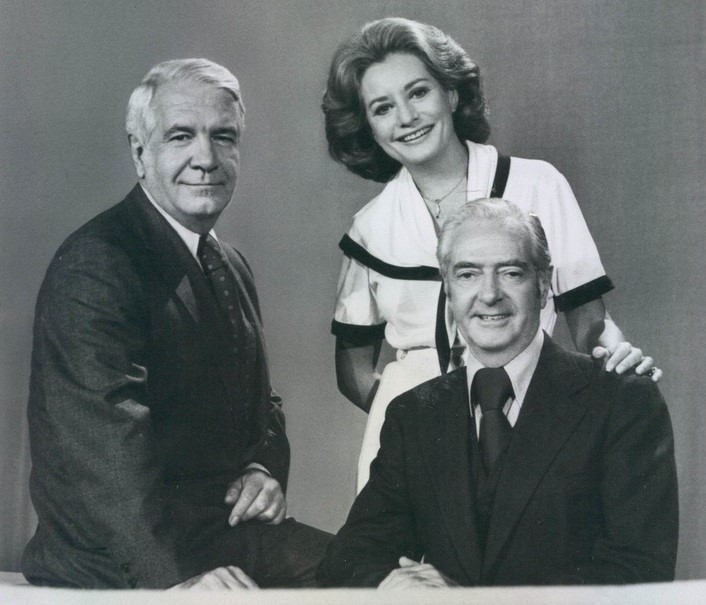 On the evening of April 22, 1976, Harry Reasoner, the anchor of the ABC Evening News, had a big announcement for his audience.  He was getting a co-anchor ... and it was a woman!  Barbara Walters would join him as the first female to anchor a network evening news program.

The announcement became a huge media splash, not only because Walters was to deliver serious news at a time when most men thought women should stick to lifestyle coverage, but because of the record salary Walters would command.  She was to be paid $1 million a year for five years. Much to her distress, the media dubbed her the "million-dollar baby."  (In the photo from 1976 above, Walters is pictured with Reasoner, left, and Howard K. Smith, another ABC News anchor and commentator.)

Walters said she took the job not for money but because it was a milestone for women's rights.  At first, she regretted it; in the short run, the promotion turned out to be pure misery.

Problem No. 1 was that Reasoner could barely contain his displeasure at having a female co-anchor.  He actually threatened to quit when he heard Walters might be coming to ABC.  As he dismissively sniped to Newsweek, "I was with her on Nixon's China trip, but I never actually saw her work. All I know about her from that trip is that she rides a bus well."  Reasoner didn't quit, but, worse, he made it clear every night on air that he thought having Walters at his side was beneath him.

The dismissive behavior occurred even though Walters was no newbie when ABC hired her.  She was a 47-year-old television journalist who had risen through the ranks to earn her stardom.  She had started as a writer and researcher on NBC's Today in 1961 and moved up to go on air as the "Today Girl."  The position was designed to handle lighter feature stories rather than news, and had been held by Florence Henderson and Lee Meriwether, who would both eventually become actresses.

But Walters took the job seriously and cultivated her own reports and interviews.  She also had a great rapport with the show's host at the time, Hugh Downs.  When Downs left, she rose to act as virtual co-host with Frank McGee.  Virtual, because despite having the work, she was not officially given that title until McGee died in 1974.

In March of 1976, however, Walters was wooed by ABC News.  The network had been rising in the ratings across every department and wanted to bring its third-place news along.  In her memoir, Audition,Walters insisted it was not so much the money she was being offered -- after all, she was making nearly as much at NBC -- but the prestige of breaking the gender barrier on the evening news.  She was told executives would expand the broadcast from half an hour to an hour to give her plenty of room to do the big-personality interviews that were becoming her trademark.  ABC, in the end, reneged on the extra half hour.

But that October, Walters did debut with Reasoner as co-anchor.  She landed two big interviews: one with the Egyptian President, Anwar Sadat, and with the Israeli Prime Minister Golda Meir.  At first the show was a huge ratings success, but over time the ABC Evening News remained mired in third place among the networks' nightly news broadcasts.  Walters says this caused Reasoner to turn further against her.  Their on-air chemistry became visibly hostile.  He once even recoiled when she brushed his arm.  The press was having a field day reporting on their strained ties.  She felt alone and miserable.

All that kept her going during those dark years, Walters wrote, were the letters she got from thousands of women across the country who had sensed Reasoner's antagonism and wrote in with stories of their own experiences with discrimination.  She also got a telegram out of the blue that she said made her feel like the cavalry was coming to her rescue.  It read: "Don't let the bastards get you down," and it was signed "John Wayne."

Walters did hang in there.  Eventually, Reasoner left for CBS, and Walters got a series of primetime ABC specials for interviews with big newsmakers and became co-host of the network's newsmagazine 20/20.  Her ratings were unbeatable.  The million-dollar baby turned out to be worth every penny.