Jane Fonda on Her HBO Documentary, Her Career and Her Biggest Regrets 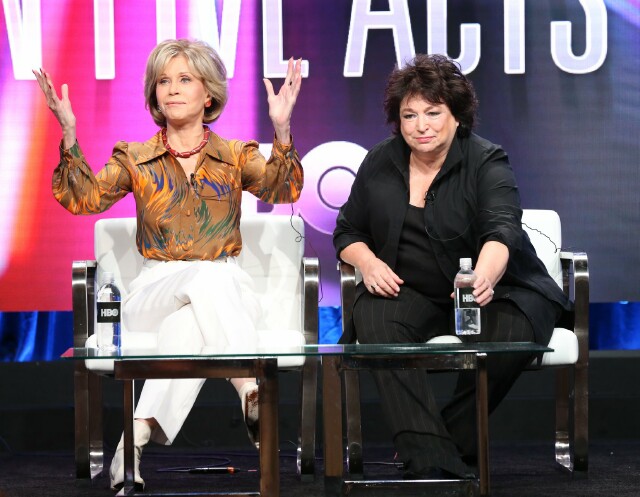 To sum up Jane Fonda in five acts seems unimaginable.  Actor, activist, trailblazer, author, entrepreneur, daughter, sister, wife, mother and legend are just a few of the adjectives frequently used to describe this remarkable woman.  Now, thanks to HBO and filmmaker Susan Lacy, her incredible life is detailed in the engrossing documentary Jane Fonda in Five Acts.  For Fonda, 80, “now” seemed the right time to explore her life in documentary form.  "Susan asked me, but there were three other people at the time all wanting to do a documentary about me," Fonda revealed during an exclusive chat with MediaVillage.  "I chose to go with Susan because I love American Masters(the PBS documentary series Lacy is best known for).  I felt Susan would know how to do it right and you kind of have to take a leap of faith.  It's like, ‘Well maybe I still have a decade or so to live, should I wait?  Who knows what will happen?  I mean, I could die!"  (Fonda is pictured above and below with Lacy, right, talking about the documentary at the 2018 Summer Television Critics Association tour.)

"I started this conversation with American Masters about 10 years ago," Lacy noted.  "But I actually started the project about two and a half years ago.  The interviewing process was over a long period of time and many, many interviews with Jane -- over 20 hours.  But the big thing was connecting with Jane's schedule over that period of time, so I was in the editing room for a long time as there is so much material."

Indeed there is.  In addition to the frank conversations Lacy conducted with Fonda, glorious home movies of the Fonda family were unearthed and included. "I had a lot of the footage, my stepmother Shirley had a lot and my brother had a lot," Fonda explained.  "[Still] some of the archival footage uncovered did surprise me and made me think, ‘Where did she get that?’  Starting with the audio of Richard Nixon; I couldn't believe she had the audio of it!" 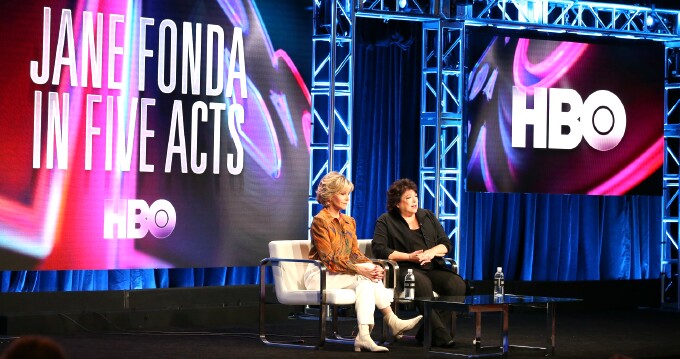 The audio Fonda is referring to stems from her infamous 1972 visit to North Vietnam to protest the war.  It was a visit that almost destroyed her career, leaving her with the hateful nickname Hanoi Jane, and it made her public enemy No. 1 for the then-President -- all due to a photo of her sitting behind a Vietnamese anti-aircraft gun surrounded by soldiers.  Dubbed an act of treason – one she has spent her lifetime apologizing for -- that photo is something she still has a hard time reconciling.  "I want to throw up [when I see it]," she somberly admitted.  "It's the most painful thing and it's because of that I can't watch the documentary anymore.  It's just too hard for me to watch.

"The mistake was I went to Vietnam alone and I should never have done that," she added.  "But I wasn't alone in that I had friends who'd been there a week before.  I don't think people understand how many people actually went to North Vietnam.  We would compare notes, so I knew who I was and I knew why I went. But I had people who loved me and surrounded me with support, that's how [I] survived the hatred.  It was pretty bad."

While the life-changing event is detailed at length, the film also explores the events leading up to it, providing some much-needed context.  The same is true of her extensive film career and the "strong men" who helped inform her life, especially her father Henry, with whom she famously co-starred with in 1981’s On Golden Pond.

There is one particularly touching scene about which she admits she still carries regret.  "I wish I'd gone to dinner at his house that night [after filming] and I wish he had said, ‘I wasn't expecting that.  That scene between us really moved me.  You really moved me.’  I wish that he were still here so that we can talk about it," she said.

"I feel I'm comfortable enough to be able to talk to him about things, illicit things, that I once wasn't able to,” she continued.  “Just the fact I'm now five years older than he was when we made On Golden Pond -- that blows my mind.”

In chatting with Fonda it was interesting to note while she was happy to be so open on camera, she has mixed feelings about the film’s release.  "I feel a little self-conscious about it," she shared.  "We are facing this existential crisis in our country and our world is being taken apart and here is this woman talking about herself for two hours."

Believe me, when the woman talking is Jane Fonda, its two hours of worthy conversation.