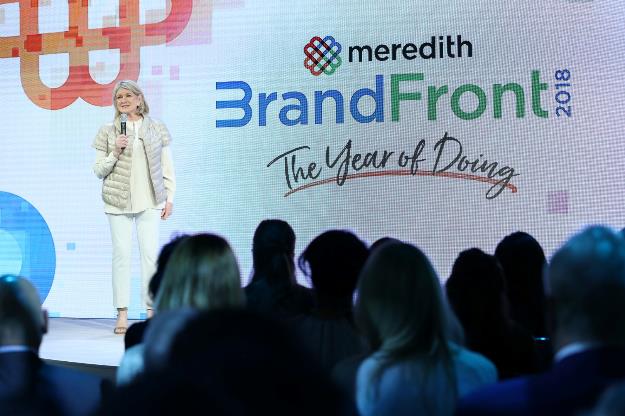 For the second consecutive September, top lifestyle magazine publisher and TV station owner Meredith Corporation staged an Upfront-style event for the advertising community.  At the first BrandFront in 2016, the spotlight was on a set of new community outreach campaigns involving their portfolio of magazines and Web sites.  At version 2.0 this past Tuesday, the message was all about consumer empowerment via the company’s print, online and social media covering a variety of lifestyle content.

Venue:  Cedar Lake NYC, located at 547 W. 26th St., a half-block from the popular High Line overhead walkway.  A popular space for Digital Content NewFronts, this was where Crackle made its first public appeal to advertisers as a smart TV/TV-connected device-distributed service four years ago. Rustic brick walls on three sides, vivid colors and a bright atmosphere engaged attendees off the bat, along with a large video-wall behind the stage and murals on either side -- "Achieve Daily" spelled out on the left, "Dream Big" on the right.  Building blocks with logos and snapshots of various Meredith magazines were stacked on both sides.  Visitors had a choice of how to get their breakfast in front of the room -- go to waiters passing around various appetizers or stop at tables.  Grade: 4 Jacks for the venue; 3.5 Jacks for the breakfast options. 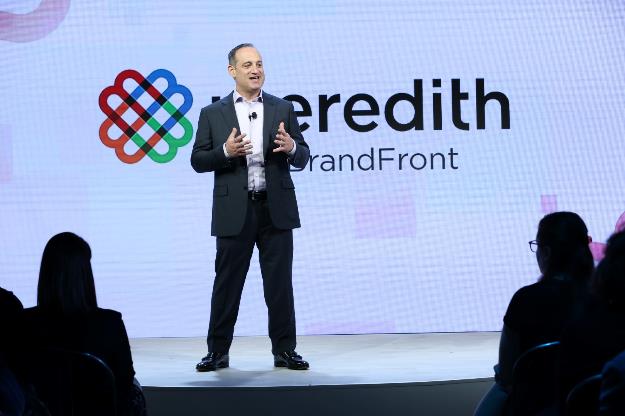 Presentation:  Full of inspiration, motivation and content variety, pushing 2018 as "The Year of Doing," as presented by Jon Werther (pictured above), President of Meredith National Media Group.  "Throughout the year, combo print/online/social media opportunities, often pairing two magazines of like or closely-related subject matter, will empower consumers, especially Millennials, to be more pro-active and decisive in their lives," he revealed.  “Together, we can spark imaginations and record daily victories."  The opportunities will be arranged under three categories: Form Good Habits (from eating to fitness), Start Something New (general lifestyle ideas) and Feel Your Passion (transform habits or your living environment).  Personalities from various magazines, including Martha Stewart (pictured at top) and Shape contributor/The Biggest Loser trainer Jen Widerstrom joined various magazine editorial directors on stage to elaborate on several opportunities.  More than 100 original video series and online applications will supplement original magazine stories and features on a regular basis throughout 2018.

Meredith hinted last fall that they would expand distribution of their online apps and videos to smart TV sets and TV-connected devices earlier this year.  That didn't happen.  The smart TV/device route remains an option under consideration, according to Meredith Video Senior Vice President Melinda Lee.  Creating original apps and video exclusively for smart TV sets/devices is also under review.  "We're open to creating and distributing content through these platforms," Lee reflected minutes after the presentation concluded.  "We want to make sure the approach makes sense with how our consumers engage with our content."  In particular, among Millennial women.  Grade: 4.5 Jacks

News:  The company's TV outreach, launched last year with Dinner Spinner (a weekly half-hour series for The CW's One Magnificent Morning Saturday block, continues in two directions.  FitCity, produced in association with Shape magazine, will have trainer Rebecca Kennedy and friends scour the nation in search of buzzworthy gyms, exercise routines and healthy/organic food eateries.  The series will kickstart next year on a channel to be announced later.  The other direction, already underway, is tie-in segments on daily syndicated programming.  Widerstrom is a regular contributor on Daily Blast Live, which launched earlier this month on Tegna-owned TV stations across the country, while Celebrity Page, the entertainment news/pop culture series from Trifecta, will introduce a regular Celebrity All-Stars branded feature that will be replicated in print and digital and on Facebook Live.  Lethal Weapon co-star Hilarie Burton and Dorinda Medley of The Real Housewives of New York City engaged in a backstage cook-off during the presentation, then treated the audience to their cuisine as they exited the place.  Dinner Spinner wrapped its CW run this summer, and Meredith is discussing other series proposals with Magnificent Morning supplier Litton Entertainment.  Grade: 3 Jacks 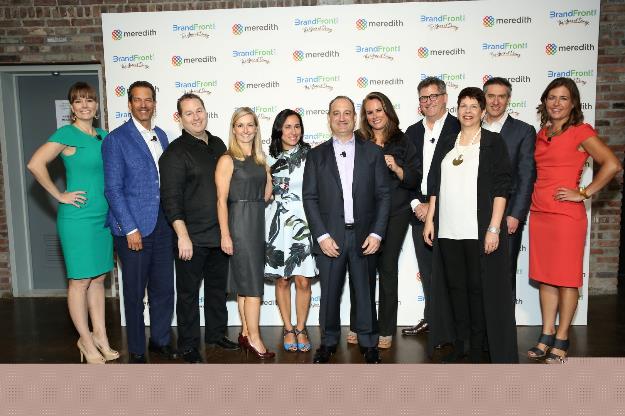 Hosts:  Solid delivery from Werther and his magazine editorial crew.  The great surprise was Widerstrom (pictured below, center, with Werther at left and Elizabeth Goodman of Shape), one of the most engaging and appealing people to show up at an event of this kind in a long while.  She takes in the crowd, commands attention without a commanding tone and dishes off wonderful one-liners such as "Connection fosters trust, and once you have trust, I can take you anywhere."  Believe it, she can.  Grade: 3 Jacks for the group; 4.5 for Widerstrom. 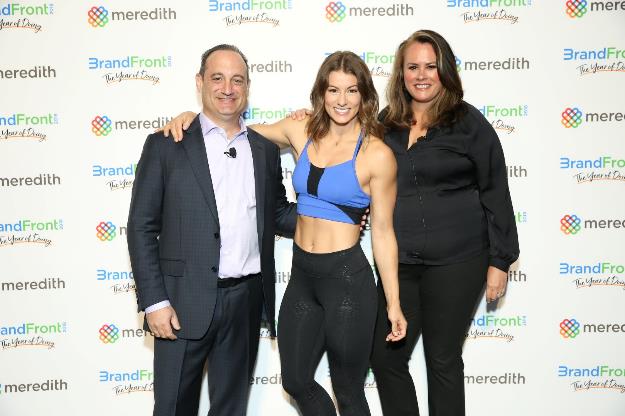 Cuisine:  Plenty to chow down, including avocado toast in three varieties and watermelon/strawberries on sticks.  Good juice and iced/hot tea bar. Best eats: mini cinnamon buns with kicker frosting and filling, and bagel bites with cream cheese/salmon filling.  Worst eats: The absence of those country ham biscuits and chicken tidbits on maple-flavored waffles from last year.  They really hit the spot.  Bring them back next September. (Note: Food ratings do not impact the overall Jacks score.)  Grade: 3 Jacks

Data Insight: Half of the company's online users visit a store within 24 hours.  Grade: 4 Jacks

Innovative Opportunity:  Plant Your Plate, a campaign involving food education and gardening, connecting Eating Well and Better Homes & Gardens magazines.  Editorial with that heading will appear in both publications and their respective Web destinations each month.  Grade: 4 Jacks

Overall Grade:  4 JacksThe presentation expanded the multi-platform/multi-angle content approach launched last fall.  One of the best visually-minded showcases offered this year, thanks to the deft mix of personal appeals, videos and graphics.