By Steve Gidlow and Ed Martin March 24, 2020 Behind the Scenes in Hollywood Archives 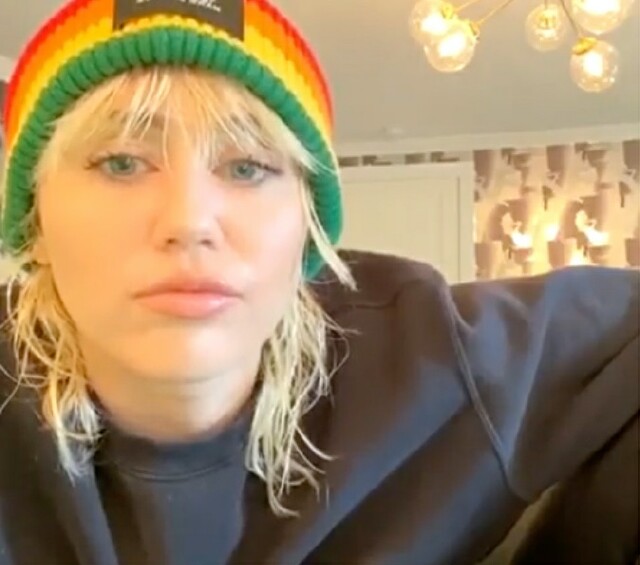 As the new normal of self-quarantine and physical distancing sets in amidst the Coronavirus pandemic, an emerging winner in this current societal upheaval is a new digital platform that has waited to become destination viewing.  While a variety of original content has been available on hosting platforms like Facebook Live and YouTube, linear channels have managed to stay at the forefront of consumers’ minds when it comes to programming, leaving the production, distribution and discovery of inventive television content to clever cord-cutters and cord-nevers.  But now, with the major television networks facing prolonged production shutdowns by studios and people of all ages seeking suggestions for binge-worthy content, celebrities are ushering in a new form of entertainment programming via multiple social media platforms, especially Instagram.  This is more than just the usual preening from shiny faced "influencers" and YouTubers.  Remember Pirate Radio?  This is Guerrilla TV.

With each passing day of the Coronavirus crisis an increasing number of industry heavyweights are banding together to bring people together and find innovative ways to keep people entertained (and to keep their personal brands top of mind) via streaming videos on social media platforms.  Even broadcast and basic cable networks are getting into the act, with late-night hosts producing special "at home" content to use as the opening segments of their shows, which would otherwise be basic reruns.  Other established talk-show personalities, from Kelly Ripa and Ryan Seacrest to Samantha Bee and Trevor Noah, are (in tandem with their producers) experimenting with presenting entire shows from the safety of their homes.

But the individual innovation in this area, while not entirely new, is expanding at a rapid clip. 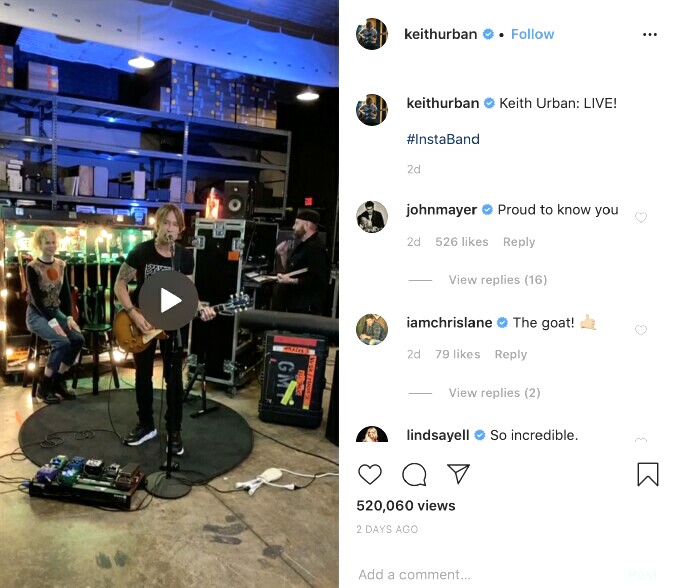 Country superstar and former American Idol  judge Keith Urban (above) was one of the first.  Faced with the unfortunate cancelation of a show, Urban took to Instagram last week, holding an impromptu 32-minute concert for his 2.3 million followers in the warehouse where he stores his equipment.  Using the hashtag #InstaBand, Urban performed six songs to an in-person audience of one (wife Nicole Kidman, who even joined in on backing vocals).  “I was supposed to be playing tonight, and I thought it would be nice to play anyway,” he told viewers.  “Even though we can’t be in front of all you guys tonight I want to be able to play and bring a little entertainment to your screens, however you are watching this all over the world.”  520,062 (and counting) views later, the concert lives on as a free destination, and a distraction for those of us seeking one.

Pink also took to Instagram, telling her 7.6 million followers that she has “decided to learn the piano once and for all, we’ll see,” before launching into a haunting rendition of Bob Dylan’s “Make You Feel My Love.”  Captioning the performance “Free concert slash piano lessons from my heart to yours,” as of this writing the video has entertained 2,978,443 viewers. 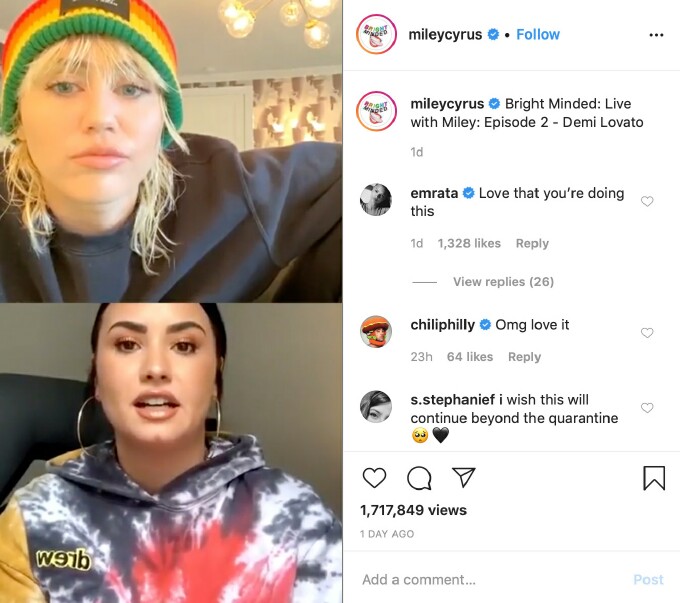 Miley Cyrus (pictured at top) has taken her gift for gab to Instagram Live with a talk show titled Bright Minded: Live with Miley.  Using her star power, and with help from friends like Demi Lovato (above), the inspirational chat-fest is designed to provide uplifting conversations and connect those who are currently social distancing.  Not governed by FCC standards, and thanks to its often-salty language and frank conversations, the show delivers exactly what it sets out to do without a gazillion dollar budget.

Current The Voice coach John Legend and Coldplay front-man Chris Martin had upcoming shows canceled due to the crisis, but took to their Instagram Live pages to unite fans.  Performing in a robe at his piano, Legend’s 52-minute set became a family affair after wife Chrissy Teigen (in a towel) joined him.  In addition to performing, Legend also offered ways to provide financial assistance to those hit hardest by the pandemic.  Both Legend and Martin used the hashtag #TogetherAtHome, which has now given rise to Together, at Home: WHO-Global Citizen Solidarity Sessions, a virtual concert series aiming to unite the isolated.  It has an ever-growing list of performers that now includes Niall Horan and Common, and is scheduled to include Melissa Etheridge and Julianne Hough, the later performing KINRGY (a movement experience inspired by the elements). 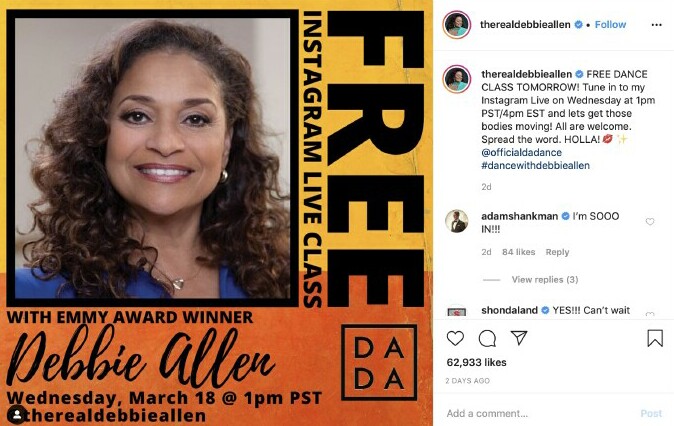 Also on the dance front, legendary choreographer/actor Debbie Allen (above) took her initiative to keep the quarantined masses moving to another level by offering free online dance classes (via her Instagram Live page) where she was met by eager participants.  The event was so well received, in fact, that Allen is set to do it again.  She posted caption alongside her cool-down video: “Great workout world!  Let’s do it again.  Don’t forget Early Bird kids class this Saturday at 11 am PST here!  See you then! #dancewithdebbieallen @officialdadance”

While we certainly hope this current state of affairs is a temporary one, there’s no doubt it’s going to take time for the entertainment industry as a whole to recover.  With some popular series losing finale episodes to unplanned production closures (and in turn advertising revenue), could these series and specials, which are virtually ad-free and have no real production costs, soon become another stream of revenue for entertainers currently unable to work?  With some already garnering 1 million-plus views (and climbing), it makes sense -- for the moment anyway.

Steve Gidlow has written about television and pop culture since 1994, beginning in Australia. Since moving to Hollywood in 1997, Steve has focused on celebrity interviews for the weekly market. He has been a contributing editor to In Touch Weekly, Life &…