Nielsen: Looking Past the 7 Day Window for Commercial Audiences

When it comes to TV viewing, consumers are tuning in when they want and how they want. This ongoing change in viewing behavior means that networks need more data and faster access to data in order to understand how people are viewing their content. To help buyer and sellers of TV advertising better understand the incremental commercial viewing that occurs past the original telecast date, Nielsen recently introduced new tools that enable networks to track, much faster, how audiences to episodes build over the first week after its original air date.

Now for the first time, buyers and sellers of TV advertising have comprehensive ratings data for all programs and commercials that consumers watch from day eight through day 35 after the original airing.

Recent trends suggest that viewers are migrating to an extended playback window for consuming TV content, and viewing behavior after the first week of a linear telecast provides this critical insight.

To see how ads perform after the first seven days of airing, Nielsen examined five weeks of commercial viewing, using data from the first week of the new television season, and analyzed broadcast and cable TV data by program.

When looking at the data for 10 popular broadcast and cable TV shows that aired during the analyzed week, program storylines drove both similarities and differences in commercial viewing, particularly after the seventh day of the initial broadcast.

At the low end, the newly available data showed a lift of just 1.8% from viewing between days eight and 35. But at the high end, days eight through 35 drove a lift of over 8% of commercial viewing.

When looking at the data for a particular broadcast drama, 92% of its viewing occurred during the first seven days of the program airing. The other 8% came between days  eight and 35. Further analysis showed that 43.5% of the playback viewing beyond seven day for the broadcast drama occurred between days 15 and 35. The overall lift in commercial ratings beyond day seven was 9%.

For the cable reality 1 show analyzed, we saw a slightly different story. While the majority of viewing for this show occurred within seven days of the show’s airing, 4.9% of the viewing happened between days eight and 35. Due to the nature of this show, 82.7% of the playback viewing occurred between days eight and 14. This show saw a 5% increase in C35 commercial ratings compared to the 9% for the broadcast drama analyzed. This shows that for this specific reality show, people wanted to watch the show live rather than at a later time.

The chart below looks at the distribution of commercial audiences over 35 days. It breaks out the percentage of viewing that occurred live to seven days of time-shifted viewing, and between days eight and 35. 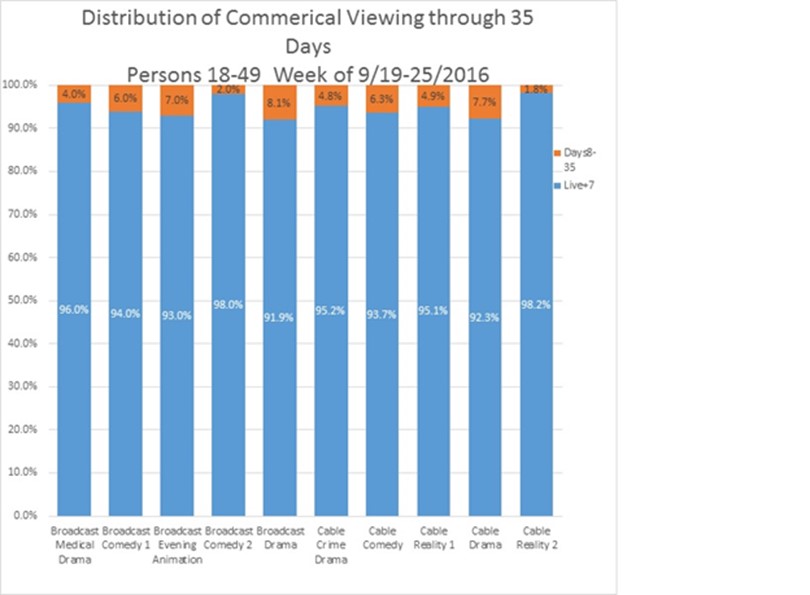 The chart below provides further insight by showing how the commercial viewing between days eight and 35 is distributed. 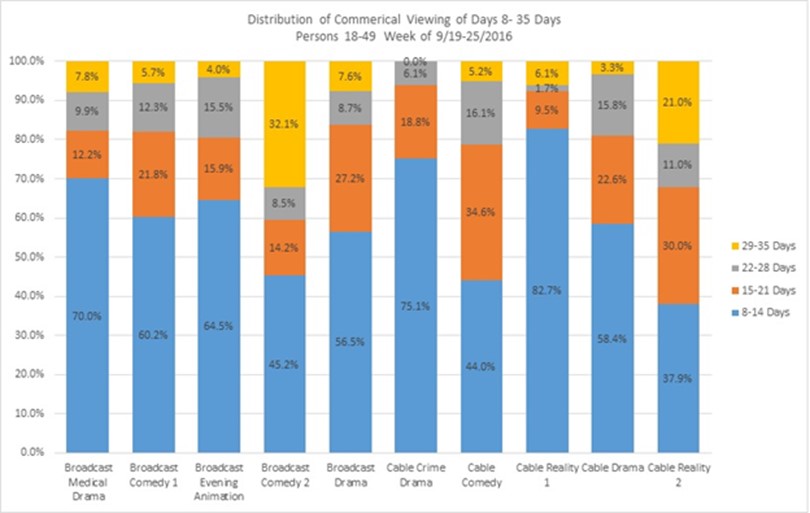 While  the bulk of program and commercial viewing occurs within the first seven days of airing, there are meaningful amounts of incremental commercial viewing beyond day seven for many shows. With these new data, buyers and sellers have much greater insight into the complete television audience for commercials.