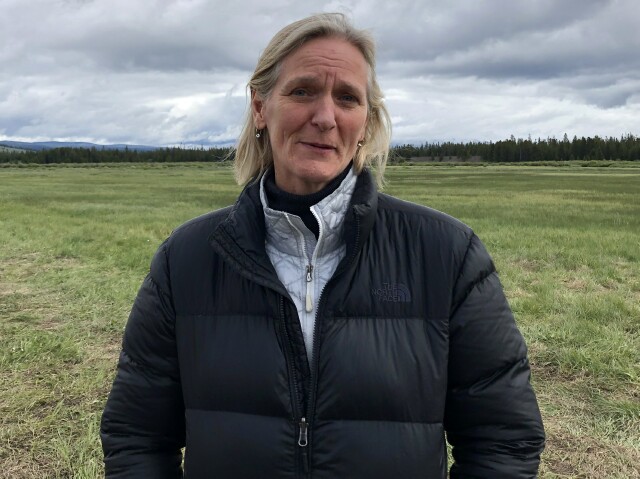 Yellowstone National Park -- On the eve of the Summer Solstice it snowed eight inches in the mountains of Montana. Down icy switchbacks, 2,000 feet below, a makeshift studio has been set up, with a gigantic satellite to transmit Yellowstone Live, a four-night event documenting the park’s majesty to National Geographic and Nat Geo Wild. MediaVillage was at the park Friday afternoon and returned as the show went live Sunday at 10 p.m. ET.(It will be telecast tonight, tomorrow and Wednesday live at 9 p.m.)

This behind-the-scenes operation would be impressive, even excessive for a TV studio, but in the middle of the wilderness, it's incongruous. On vast meadows, baby red bison huddled behind their mothers, which, incidentally, dwarf most SUVs. Eagles perch on old-growth trees, and at night, wolves' howls pierce the cold air. This spring saw a baby boom in the park: Elk, beaver, eagle, bear and wolf newborns will be featured on the show. For anyone who thinks otters are adorable, wait until you see the pups, which video editors monitor from a live feed.

Martha Holmes, an executive producer whose most recent program for National Geographic was Hostile Planet, remains fascinated by different creatures that crews have been filming all week to use during segments of the show, in case there’s a quiet moment while host Josh Elliott and naturalist Chris Packham are on air. Holmes chatted with MediaVillage about her 30-year journey from zoologist and marine biologist to becoming an executive producer.

Jackie Cutler: What is your role as an executive producer?

Martha Holmes:My role is twofold. I have built and oversee a relationship with the national park. They have a lot of demands on them from filmmakers, and it is quite a process, applying for permits and getting permission, especially for live telecasts. I have a duty to Nat Geo and Plimsoll (the U.K.-based production company where she heads natural history) and to the park to represent the animals fairly and rightly and with respect. My specialty is interpreting animal behavior for television.

Jackie: Have you been out in the field much here?

Martha: I don’t really get in the field. I would love to. Sadly, the more senior you get in any role, the less contact you get with the grassroots. In this case, the grassroots really is the grass roots.

Jackie: How is the project different from what you were doing with Hostile Planet?

Martha: It’s a completely different mindset. It’s reactive and immediate, where Hostile Planet was years in the making. It’s like news in a way; it’s live and what happened today and it’s exciting. The moment the show is over you are moving onto the next show.

Jackie: When did you become an executive producer, and why?

Jackie: Are you one of the only women executives behind the scenes?

Martha: I guess. I have a very helpful husband. It is literally logistics, isn't it? When you get married and have children most women take time off, and my husband wanted to bring up the children, so I was home for a very short window, just literally a few months. I need to be doing something. I am not a sit-around person. I thought breastfeeding was the worst job in the world. I was so bored. I need to be physically active.

Jackie: As a woman past 40, you must have some war stories of sexual harassment at work. What were your experiences like?

Martha: It’s never a big deal for me. It’s a moment in passing. I am a very straight talker. I move on. You just say, ‘no thank you’ and move on. I am not a victim, and I never feel a victim, and I think that's critical. I am not looking to blame anybody. I am not on that path. And I don't play the game. That's another thing. I am not a very feminine female, so I don't invite those approaches where other people unconsciously might. I don't even know how to do it.

Jackie: When did you feel you had made it as an executive producer?

Martha: When I got the job, and someone believed in me and gave it to me. It was a series called Predators Up Close with Joel Lambert. It’s quite a step from being a showrunner to someone who gently steers things rather than running it, so you are not in the nitty-gritty detail of every day. It is hard to let go. To do well, you have to have opinions, and you are working with people who feel exactly the same. This is their show, and I will gently steer it. I miss the job these guys are doing in the mountains and in a helicopter filming. My job is to make sure everything runs smoothly from here.

Jackie: What have you seen here at Yellowstone that you hadn’t seen before?

Martha: Everything! I have been here before, but every bit of behavior is new and exciting. To see those little black bear cubs run up a tree … they scamper! It's amazing!