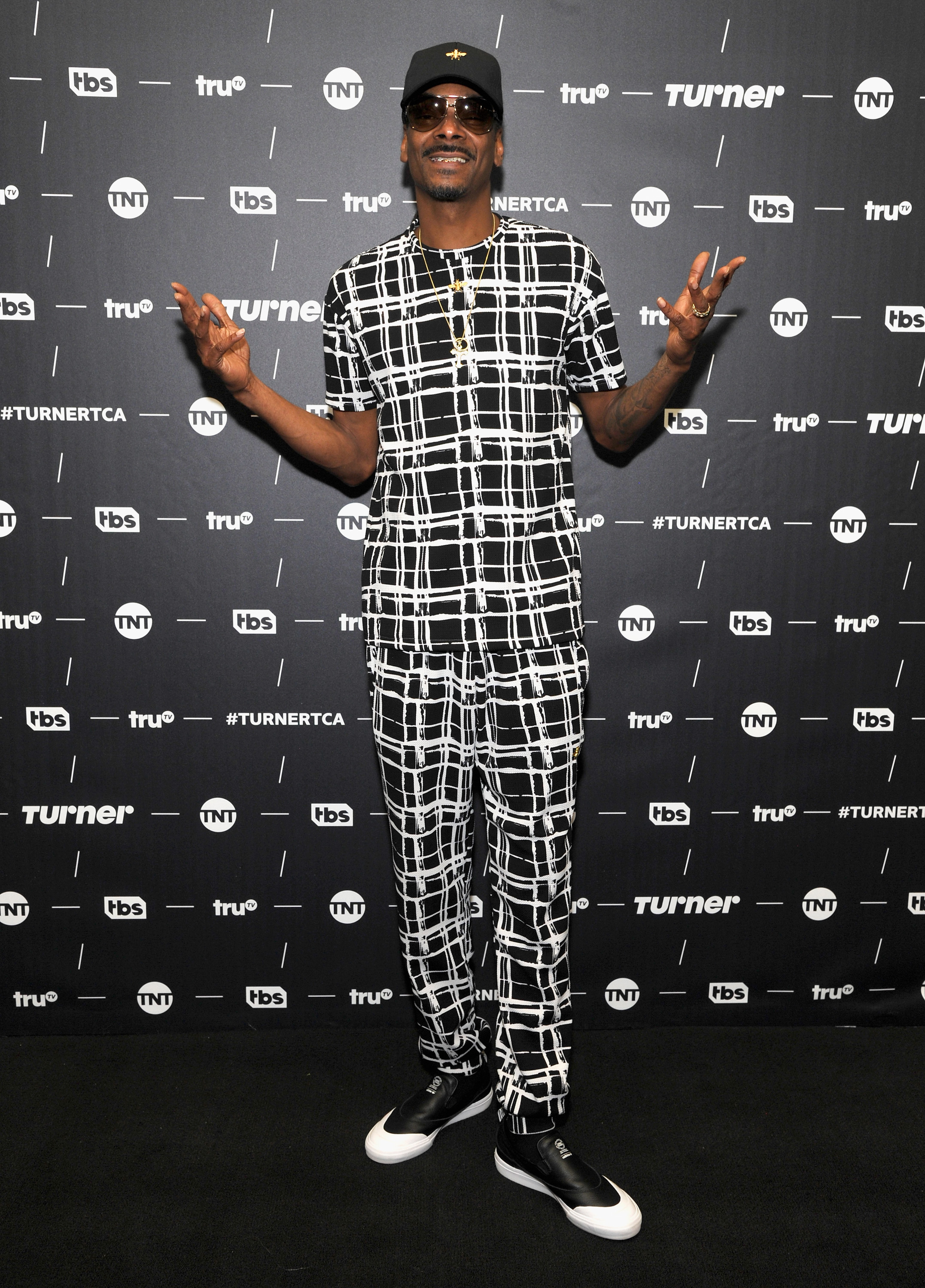 Every new primetime scripted comedy landing on TBS over the last two years, including newest entry The Guest Book, has achieved that key-to-success trifecta: viewers, critics and advertisers. The network wants to score just as impressive a streak in the arena of unscripted entertainment. That effort launches on October 24 with two half-hour series scheduled back-to-back. Snoop Dogg Presents The Joker's Wild, an update of the classic game show "where knowledge is king and lady luck is queen," kicks off the 10 p.m. slot, with Snoop Dogg (pictured at top) as host and executive producer. Immediately after Joker comes Drop the Mic, which expands on the popular rap improv feature of The Late Late Show with James Corden.

"Our strategy here is very simple -- live up to the impressive success we've had in scripted," says Michael Bloom, TBS/TNT's Senior Vice President of Unscripted Series and Specials. "Since rebranding TBS just two years ago, we have renewed 100% of our scripted originals, which have all generated impressive audience growth in an environment that's seeing mostly declines. They set the bar, and we have to match it."

Here's how: use already existing formats and freshen them up, or take a popular segment of a current series and blow it up to a half-hour or hour program. Snoop Dogg Presents The Joker's Wild exemplifies the first approach, while Drop the Mic is indicative of the other. (The Summer 2017 Television Critics Association tour panel for Mic is pictured below.) Either way, the key is to pour on as much celebrity power as possible to have the best shot at drawing both a solid audience of Millennials and viewers age 25-to-54, Bloom suggests.

This is a big reversal from the grow-your-own creation strategy TBS deployed in the last few years for unscripted primetime programming. The approach ended up hit or miss, with the misses off the schedule after one season.  Full Frontal with Samantha Bee, Angie Tribeca, People of Earth, WreckedandThe Detour were winning exceptions here, especially with Samantha Bee's show generating water-cooler chatter and buzz inside government circles while racking up nominations and awards.  One-and-done efforts included Separation Anxiety andTrust Me, I'm A Game Show Host.

With Joker and Drop, "we're betting on the DNA inherent in their background and execution," Bloom explains. "These are entertaining, friendly competitions that are easy to follow and have room for comedy. They also have the ability to create engaging, surprising verite moments when the action goes off the rails. You get some of the best moments that way."

For Joker, two contestants will spin those familiar wheels to answer questions in various categories or bring the game to a quick end with three jokers and one question. (Yes, Snoop Dogg does give the famous Jack Barry call of "joker ... joker ... JOKER!!") Celebrity-hosted videos are scattered throughout the categories and the contestants can turn to "Lady Luck" for extra help. In the bonus round of this re-booted version, the purse is upped from $10,000 to $25,000 if the winner avoids all the "devils."

In the run-up to Joker's debut, TBS will highlight Snoop Dogg's first shot as game show host through an exclusive, six-part, six-minute docuseries titled Getting Wild with Snoop Dogg, directed by Emmy-winner Rory Karpf. Getting Wild will play on Facebook's new Watch video tab, the network's website and its app for smart TV sets, TV-connected devices, mobile devices and tablets. "Snoop, while he loved the original series, had to learn a whole skill set to do this," Bloom noted. "Creating a digital-distributed series to highlight this transformation was a nice promotional tool that also gives fans behind-the-scenes access and follows the icon's transformation into game show host."

In Drop the Mic, four celebrities or celebrity teams participate in each episode, co-hosted by Method Man and Hailey Baldwin. The challenge consists of two head-to-head rap rounds and a final face-off involving the winners of each round. Early episode participants include Usher taking on Anthony Anderson, Modern Family's Jesse Tyler Ferguson up against This Is Us Emmy-nominee Chrissy Metz, and Boyz II Men vs. Rascal Flatts.

Bloom promises plenty of those genuine moments. "It was fun to be on the set and catch all the madness," he recalls.  "It came through in the audience reaction. The fun and energy were at such a high level, the stage managers often had to step in and calm everyone down."

Several unscripted formats are under review for 2018, and TBS will announce which of them will get on the schedule in due time. "It's a matter of using proven material that can be both scalable and unpredictable in execution for our viewers," Bloom says.