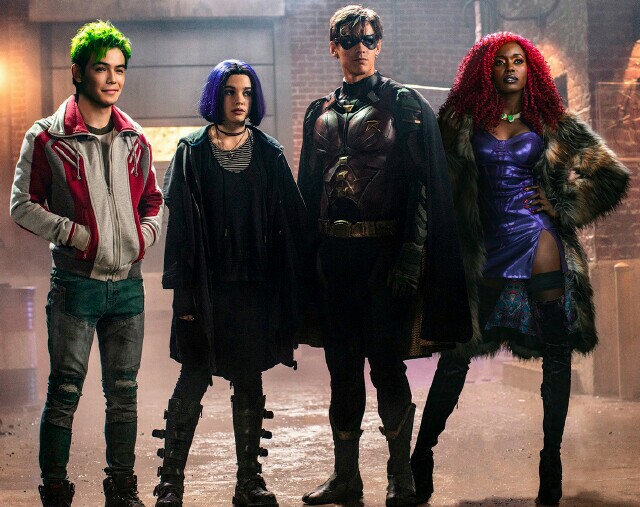 Warner Bros. Television and DC Entertainment were so confident that the superhero genre is not overexposed, and that fans of the genre aren’t tired of caped crusaders and indestructible villains, that they recently launched DC Universe, a new streaming service dedicated to developing feature films, live-action series, animated series and other media around the vast catalog of characters from DC Comics.  The streaming service’s flagship series Titans premiered its first of twelve episodes on October 12 and was renewed for a second season even before its debut.

Titans follows a group of young, crime-fighting super-powered heroes that band together to stop a rising threat.  They include (pictured at top, left to right) shape-shifter Gar Logan/Beast Boy (Ryan Potter); the psychic-powered Rachel Roth/Raven (Teagen Croft); Dick Grayson (Brenton Thwaites), a.k.a. Robin (once the Boy Wonder), and alien princess Kory Anders/Starfire (Anna Diop).  The Teen Titans from DC Comics have received various animated adaptations in recent years, including Teen Titans, a rather dark and serious drama, and Teen Titans GO!, a much lighter and comedic rendition, coincidentally with the same voice cast.  Titans very much harkens back to the former.

For the first couple of episodes, the Titans team has not yet fully come together.  Batman’s former sidekick is at the center of the action, having moved from Gotham City to Detroit and now leading a double life as a police detective by day and crime-fighting vigilante by night.  He soon meets Rachel, a disturbed young girl whose mother was murdered by a member of the Doomsday cult that is now targeting her.  Rachel says she recognizes Dick from a recurring dream of the tragic accident that killed his parents.  Meanwhile, in Austria, Kory Anders wakes up from an auto accident with amnesia and soon discovers she has the ability to project fire from her hands -- and learns that prior to her accident she was looking for Rachel.  Determined to keep Rachel safe, Dick seeks the help of crime-fighting duo Hawk and Dove (played by Alan Ritchson and Minka Kelly, respectively). 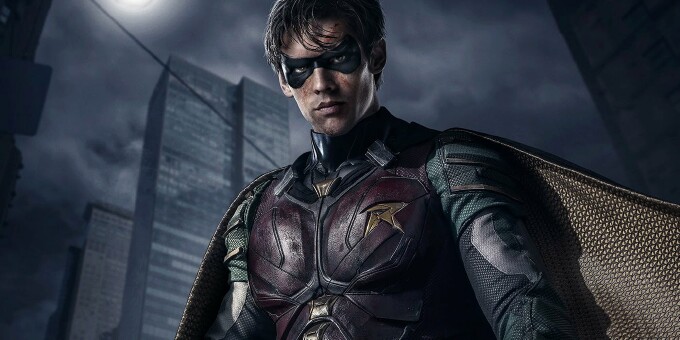 Brenton Thwaites makes a strong impression as Dick Grayson, the resentful and reclusive young detective, and the tender onscreen moments he shares with Teagen Croft are moving and show a more sensitive side to the otherwise “tough guy” demeanor he gives off.  The stunt work and fight choreography in the premiere’s big fight sequence -- first seen in trailers for Titans with Dick shockingly saying “f*ck Batman” -- is incredibly impressive, as is the sight of the trio of “bird heroes” Robin, Hawk and Dove fighting off a gang of armed henchmen in the second episode.

Croft gives an impressive emotional performance as the dual personality Rachel/Raven, especially considering that Titans is only her third screen credit.  Her take on Rachel is not only vulnerable and raw, but also incredibly wise, even without her psychic abilities -- so much so that she is able to awaken something in Dick to stop procrastinating and fulfill his destiny.  “You’re just scared,” she says.  “Sometimes there’s no time to be scared.”  Anna Diop is also awesome as Kory, a young alien unaware of the full potential of her abilities.  There are many subtle nuances in her facial expressions and her movements, but her larger reactions show she is like a firecracker ready to explode if she’s provoked.

Also worth noting are the special effects used in the scenes revealing Anders’ abilities, as well as the transformations of my personal favorite Titan, Beast Boy.  He is the Titans member that gets the least amount of time in the spotlight as the story focuses more on Dick and Rachel.  This is understandable, however, as we don’t want too much crammed into a single episode where we’re meeting four major characters for the first time.  But once Beast Boy shows up, he becomes an instant favorite as his comedic timing and loveable personality are much needed amongst the darker details of the series.  For those same reasons, the storylines at the start felt a tad disjointed as the characters were not yet the titular team.

DC Universe streams a new episode every week, a smart move on the streaming service’s part, as Titans is its only original series so far and making the entire season available at once would likely result in cancelled subscriptions until the next series launched.  (It’s known as “binge and bolt.”)

The new service has several live-action and animated series in development including a Titans spin-off focusing on the super-villain team Doom Patrol.  Notably, Titans is not aimed for younger audiences that may generally watch lighter superhero fare such as Spider-Man: Homecoming or The CW’s many DC series, including The Flash and Legends of Tomorrow.  Because of its grittier take on these younger, perhaps even slightly naïve characters, and its heightened violence, it is very much for an older audience.  It feels like a natural progression for the audience that grew up watching the animated series Teen Titans, which was a hard-edged drama in its own right.

New episodes of Titans stream every Friday on DC Universe.