By Simon Applebaum May 18, 2018 Upfronts/NewFronts Archives 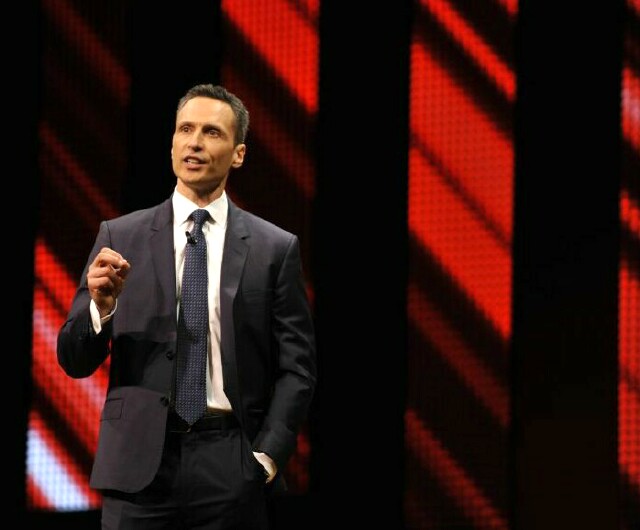 Once a year, on a Tuesday morning in mid-May to be exact, The Lion King’s edifice at the Minskoff Theater is converted from an on-stage animal kingdom to a wide world of sports when ESPN presents its annual Upfront event.  This year the morning came with a bonus:  The first face time for ESPN+, barely a month old as a service available through smart TV sets and TV-connected devices.

Venue:  Minskoff Theater, between W. 44th and 45th Streets, home to this showcase for five years running.  Cheerleaders greeted attendees at the bottom of the escalators to the main lobby and college and pro team mascots mingled with the lobby crowd as all present grabbed breakfast before entering the theater.  A wide screen on stage and monitors outside rolled out the "ESPN Hall of Firsts," a tape of milestones in the network's history both notable and trivial.  One eye-catching standout: Gatorade launching ESPN the Flavor (looks like raspberry) in 2004.  More than a few recounted advertiser involvements, from Budweiser's precedent-setting sponsorship before ESPN's 1979 launch to American Express' charter ad participation in ESPN+.  Grade: 3.5 Jacks

Presentation:  Using a mix of executive and on-air talent segments, led by new ESPN President Jimmy Pitaro (pictured at top), the constant theme was repositioning the company as the home for brand-friendly sports storytelling, whether the form is live event coverage, daily reporting and analysis on SportsCenter and other programs, or in-depth material presented through 30 for 30, E:60 and other ongoing franchises.  The storytelling mantra exists regardless of distribution mode -- linear channel, digital, mobile or smart TV set, Pitaro and executive colleagues stressed.  "No one has our unique combination of strengths," he asserted.  "But we're not resting on our laurels.  ESPN+ is the beginning of a whole new era for us."  There were more exciting new things, from an appearance by the new Monday Night Football on-air team led by solid play-by-play caller Joe Tessitore to documentation of the new multi-tactic campaign relationships with Northwestern Mutual and DXL Men's Apparel stores.  However, no ESPN Upfront presentation would be complete without a generous round of humor from SportsCenter anchor and grand Upfront pundit Kenny Mayne.  Instead of incessantly riffing on one topic, like big data or cord-cutting (an instnat-classic highlight last year), Mayne played disruptor in the opening sequence, then reappeared for some moments of zen with a variety of topics on his skewer.  Examples: "Fewer ads for 70 percent more money is a good thing.  It cost $1,700 to make these stupid things (cannons shooting off dollar bills into the audience)."  Grade: 4 Jacks overall; 4.5 Jacks for Mayne's double dip.

News:  In a first-ever series collaboration with Netflix,ESPN will put together The Last Dance, a multi-part miniseries chronicling basketball superstar Michael Jordan's final championship run with the Chicago Bulls in 1997-98.  Dance will debut next year; no determination yet on whether ESPN or Netflix gets the premiere window.  Basketball: A Love Story, a collection of more than 60 short-form features involving iconic talent on all levels of the sport, will run throughout the network's schedule this October.  New Sunday Night Baseball co-analyst Alex Rodriguez will executive produce and host Pivot, a four-part exploration of how athletes deal with crisis points in their lives.  Episodes will run on both ESPN and ESPN Deportes this summer.  Deportes also will carry live Spanish-language coverage of the Super Bowl for the second time, through an arrangement with CBS. Grade: 4 Jacks

Host:  Pitaro came off cool and collected in one of his first public appearances as ESPN president. (Note: He also did a 20-minute meet with reporters immediately after the event.)  Good contributions from Tessitore, College Gameday host Rece Davis, First Take commentator Stephen A. Smith and SportsCenter anchorperson Elle Duncan.  Grade: 3.5 Jacks

Cuisine:  A variety of breakfast nibbles, spaced throughout the main lobby.  Best eats: lemon poppy and banana chocolate chip mini-muffins.  Worst eat: ham and eggs on a bun with gruyere cheese.  Too little ham; too much egg.  Grade: 3.5 Jacks  (Note: Cuisine ratings do not figure in the overall Jacks score.)

Innovative Opportunity:  Using a new virtual reality solutions studio where products and brand information can be integrated with a number of live event and sports news coverage options, such as stat boxes.  Talent can appear in virtual-generated environments or show up at a remote site. Grade: 4 Jacks

Overall Grade:  4 Jacks  Solid overviews of the general multi-platform direction ESPN is taking.  Kenny Mayne remains at the top of his satirical game.