Lauren Kohli of Hulu on Mentorship and Defining Her Career 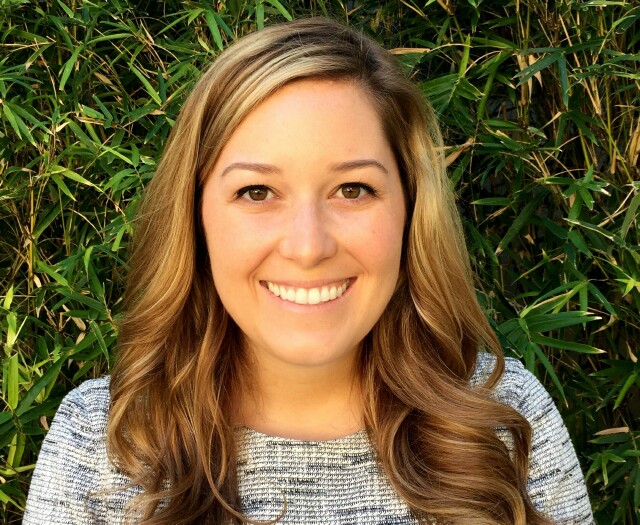 It can take some time for young people to align themselves with work they’re excited about, especially right out of school and with the creation of more and more industries that didn’t even exist years ago. This wasn’t the case for Lauren Kohli, Associate Marketing Manager at Hulu, whose transition from student to employee was an admittedly seamless process. She found a natural fit with her work, as she’s been cultivating her skills and passions as early as ten years old.

“When I was little I used to create PowerPoints to convince my parents to buy me things … like a hamster,” she laughs. “This was before laptops! I used my family’s desktop computer and it has foreshadowed my work now. I create PowerPoints all day long.” Although there was no way of telling where she’d end up, Lauren enthusiastically insists that she was destined to work in sales marketing.

Lauren comes from a close-knit family of five, the middle child between older and younger brothers. (She is pictured below with her brothers Luke, left, and Kyle, right.) Growing up on the west side of Los Angeles in Pacific Palisades, her childhood was full of dance and cheer competitions, musical theater performances and countless football games. She considers herself to be creative and fond of the arts, but also a “huge math nerd” in her younger years. A love of complex problem solving inspired her to study economics as a student at the University of California, Los Angeles (UCLA). In addition to her studies, Lauren took on the challenge of being the President of the Beta Delta Chapter of Alpha Phi sorority, which taught her all about seeing the big picture and wearing many hats. 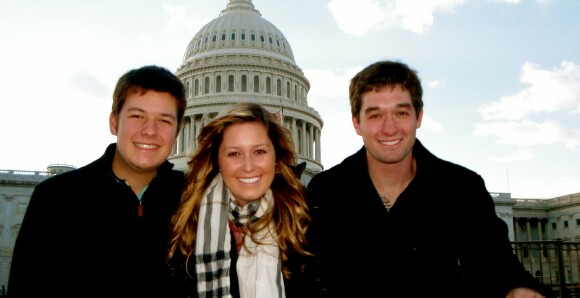 “I had to learn how to manage the interests of multiple people,” she explains, speaking of liaising between her sorority sisters and the university. “In my job now, I’m an advocate for the sales team. I have to hear the needs of other internal departments and manage expectations across the board.”

Lauren desired to deviate from the typical econ major trajectory of a career in banking, finance or accounting for a more creative environment. A binge-session of several episodes of ABC's “The Bachelor” on Hulu inspired her to explore opportunities with the streaming platform and then-emerging tech brand. Her start with the company began as an Ad Solutions intern, where she had a great deal of responsibility. She worked closely with the team, creating presentations and researching collaborative partnership opportunities between advertisers and distribution platforms.

“I’m really thankful for the internship opportunity,” says Lauren, who was one of the youngest team members to be hired. Within just four and a half years at Hulu, she’s been promoted twice, from her first full time position as a Marketing Coordinator and to her current position as an Associate Marketing Manager. “As an intern, I really felt like a part of the team and the business relied on me to move forward,” she says.

Now, as an Associate Marketing Manager, Lauren works with editorial, content, distribution and new ad products, taking on what she describes as both reactive and proactive responsibilities. “My job is to find opportunities for advertisers to maximize revenue and to provide them with unique opportunities,” she says. This involves working with her team to generate creative advertising solutions for partners and brands. (Lauren is pictured below at the Summer 2015 Television Critics Asscoiation tour with several colleagues. She is holding the "l" in Hulu.) 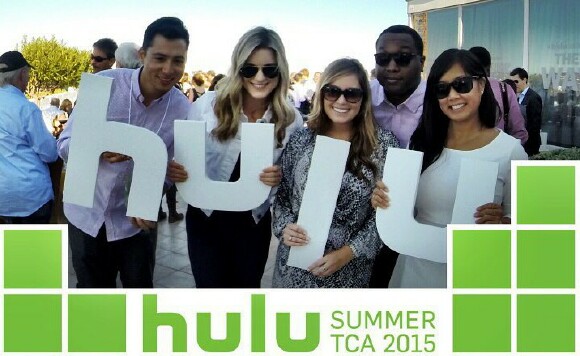 Lauren attributes much of her success to her professional mentors, both the ones she developed relationships with early on like Melissa Grant (then Director of Sales Marketing and Events) and Elizabeth Poerner (then Director of Ad Solutions) as well as her current managers Jason Ander (Senior Manager, Ad Sales Marketing and Promotions) and Emily Chrietzberg (Director of Ad Solutions). She’s also had the opportunity to mentor others through the SPARK Program and as a big sister. In partnership with Hulu, Lauren connected with a Los Angeles middle school student who came to the office on a weekly basis to chat about school, pop culture and her future goals. “I was inspired by her passion and energy, and though she may not know it, I was challenged to be a better listener, peer and role model through my interactions with her,” says Lauren.

“It’s important to find good mentors,” she continues, “particularly right after college.” There’s a six-year age difference between Lauren and her younger brother, a sophomore Sports Broadcasting major at Texas Christian University (TCU), and it’s been rewarding for her to help him with his resume and interviewing. “My siblings and I are all very different but I’m happy that we’re able to do the things we’re passionate about.” 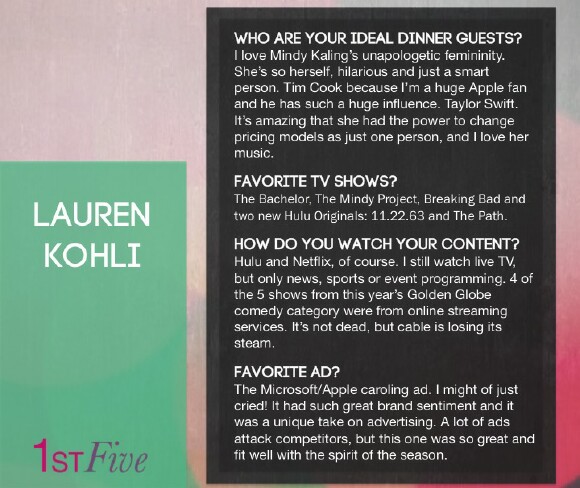 Even though she’s been at Hulu for only a short time, Lauren has already learned quite a lot professionally. If she were to give advice to her younger self, Lauren would advocate for asking for what you want. “Take advantage of every opportunity you’re given!” she says. “I don’t think I knew this at 15. I learned it at 22." Lauren adds that it may be hard for young people to grasp, but no one is a mind reader and you often have to take that extra step for opportunities to come your way. “You’re used to working hard and being rewarded, but in business, it doesn’t always happen that way. I think that’s something I have to constantly remind myself.”

In addition to what she’s learned on the job, Lauren remains acutely aware of the challenges her industry is facing. She notes that in this current climate, the most difficult barrier is simply staying above the fray. “There are so many different places to get our content. A recent study said that people have a seven-second attention span, and that’s less than a goldfish! Marketers can get someone that’s on their phone and want to be there in that moment, but you only have seven seconds to grab their attention.”

Celebrating her Hulu-versary in June, Lauren has become a trusted member of her team. It’s important for the industry to encourage cheerleaders like Lauren -- those who are able to drive enthusiasm for their company on both the business and creative side.