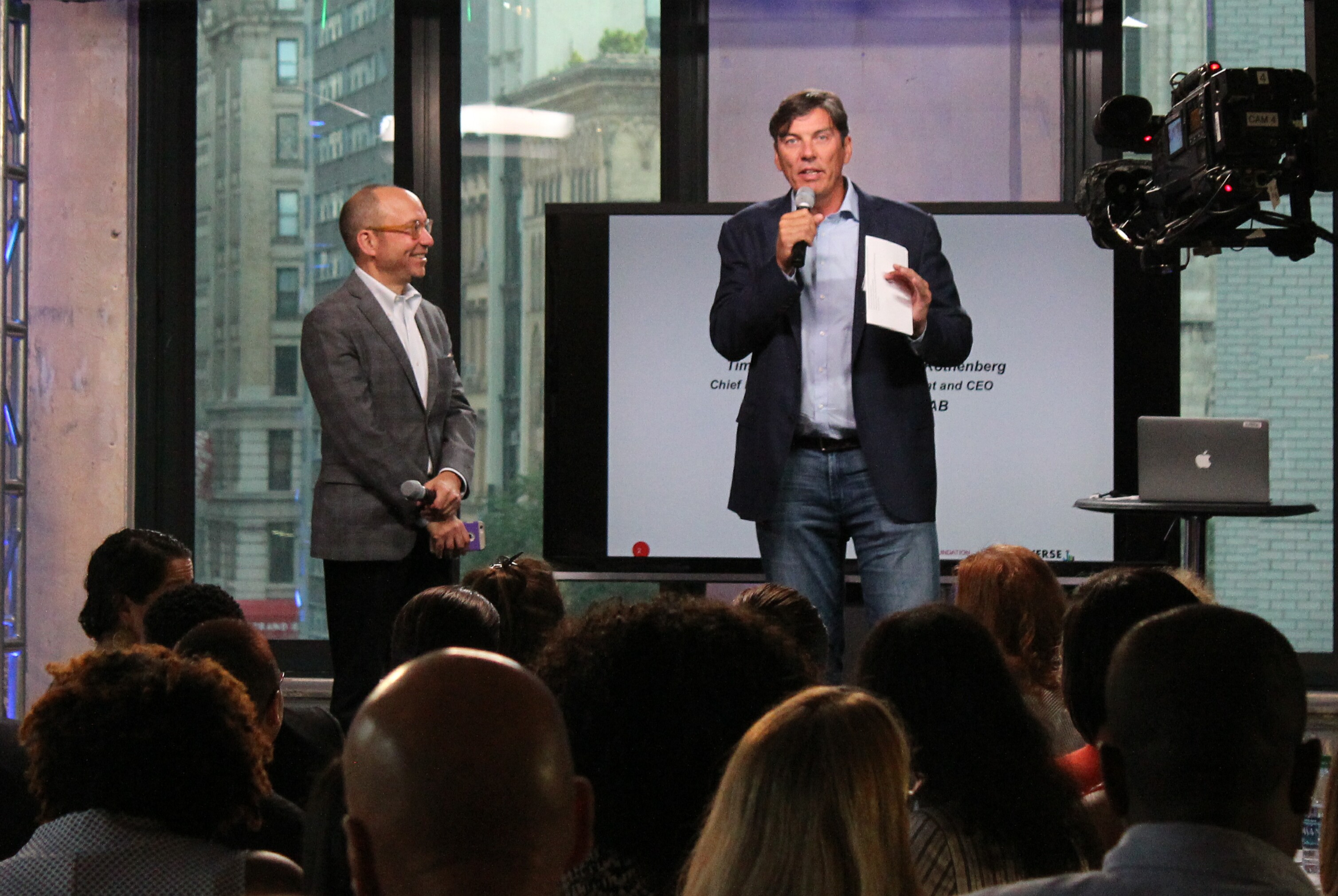 “What if we said that only certain people could compete in the Olympics and get on the starting block?” Tim Armstrong, CEO of AOL and Chairman of the IAB Education Foundation, asked the crowd at the IAB’s iDiverse Breakfast at the AOL offices on Wednesday morning. Announcing the IAB Education Foundation’s diversity commitment of 10,000 jobs across 200 digital companies by 2020, he stated, “This is the Olympics of diversity ... A lot of companies have been announcing their diversity numbers, but the one thing we want to do is make physical change and infrastructure change.” Referencing the WSJ article on Facebook’s struggle to close their diversity gap that published just that morning, he noted, “Competing in the Olympics comes with failure, but if you want to compete, you have to take risks and train.”

Armstrong (pictured at top right) then passed the mic off to Randall Rothenberg (top left), President and CEO of the IAB, who announced the IAB’s new partnership with the Borough of Manhattan Community College to offer digital training courses to prepare students for entry-level jobs in the digital and media marketing industry. “This is the fastest growing industry in this country and in the world. We just need to open the jobs [to diverse candidates],” he concluded.

Twyla Perrin, AOL’s People Advisor and Diversity & Inclusion Lead, then introduced the IAB’s iDiverse online directory -- a tool for companies to easily search and partner with over 500 non-profits working on diversity initiatives.

But it was Freada Kapor Klein, Co-Chair of the Kapor Center for Social Impact, who stole the stage, going through the various “leaks” in the talent pipeline that keep diverse candidates from tech jobs, starting with K-12 education. “Genius is evenly distributed by zip code, but opportunity is not,” she stated. “If you believe that, then you organize your activities around it.”

She went on to reveal some pretty dismal facts:

If you need a business reason for diversity, Kapor Klein explained that companies with gender-diverse boards outperformed companies without gender diversity by 15 percent. That percentage doubles when you have gender, racial and ethnic diversity in senior leadership.

When you go back to your companies, Kapor Klein advised, ask, “How can we champion diversity and inclusion initiatives and make them business responsibilities instead of side projects?” If diversity is an integral part of an employee’s business goals, evaluation and compensation, she argued, then we will start to see real change. Above all, “never put people in the position of being ‘an only’” -- whether that’s in an interview pool or in the workplace. “Otherwise you will have a revolving door,” she warned.

After an announcement of a new iDiverse task force, Armstrong closed the morning with three calls to action:

2. “There’s a real big difference between management and leadership,” he told the audience, urging everyone in the room to take the initiative to solve these issues in their own companies.

3. “No one is devoid of a diversity strategy,” he continued, “but the culture and execution get in the way. To get the world’s best talent, everyone needs to be uncomfortable,” noting that the goal is not to train diverse people to fit in, but instead, to transform companies and company culture.