By Simon Applebaum September 29, 2015 Tomorrow Will Be Televised Archives 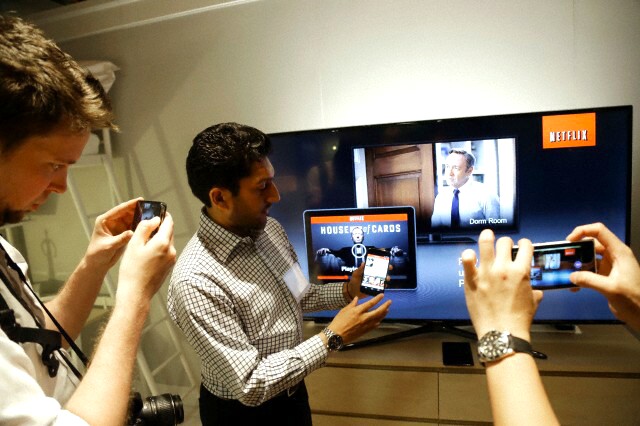 Random notes from this busy fall season: With Apple TV 2.0's availability just a few weeks away, the rest of the smart TV-making device field appears not to be standing still, whether or not there's fear of losing market share. Google's Chromecast 2.0 gets unveiled this week, while the second edition of Amazon Fire TV comes out within two weeks and Nvidia's Shield displays for the first time since its May rollout at Pepcom's Digital Experience showcase here in New York Wednesday night. There is a sense that everyone wants to be ready if Apple CEO Tim Cook's declaration that "the future of TV is apps" – as in informational, transactional or interactive services -- pans out. Travel site Orbitz is now an Amazon Fire attraction, and similar apps for TV are reportedly on the fast track at Chromecast, Roku, Shield and Intel's Compute Stick.

Amazon Fire TV also serves as a charter affiliate of Poker Central, the 24-hour network devoted to the pastime of cards and chips launching Thursday. No word yet on how many cable or satellite customers will get the channel at launch. Ditto charter advertisers. Poker Central's management is keeping those details close to its vest, pun intended.

You know its autumn in New York when Diversity Week and Advertising Week hit town. Both take place this week within blocks of each other around Times Square. Both events also kick off the most crowded and extended lineup of fall-season TV-oriented conferences in New York history. New York Media Festival follows next week, followed by Comic-Con, TechWeek, New York Television Festival, NYC Television Week, Streamy Con and the new Innovate event from the Consumer Electronics Association. No sprint here -- this is a marathon of great proportions. Treasure the breathing room where you can.

Whatever you thought of “Game of Thrones” winning the Emmy Award for best drama series, writing and directing this year, a decades-long unwritten Emmy commandment was dethroned: Thou will not give out big awards to science fiction, horror, fantasy or speculative scripted series. What “The Twilight Zone,” “Star Trek” (and its many spinoffs) and the modern era “Battlestar Galactica” could not accomplish in their first-run existence, “Thrones” did.

Now is the time for Emmy organizers to quash their remaining controversial commandment:  Thou will group together acting, writing and directing nominations for made-for-TV movies, miniseries and limited series. There is no fair way to judge performances or creative work on a 90-minute or two-hour film against a miniseries involving four hours or more, or a series designed to run more than one year. Had they been separate categories I'll bet Queen Latifah would have an Emmy for her superb portrayal of blues icon Bessie Smith in that well-made HBO biopic “Bessie.” Or “The Book of Negroes” and star Aunjanue Ellis would have been nominated, giving BET a shot at its first major Emmy for its first original miniseries. Or “American Crime” would have captured more nominations and awards for its first limited season. Let's go Emmy people -- tear down this wall!

“Best Time Ever with Neil Patrick Harris” may be uneven creatively, but its "End of the Show Show" closing sequence has become must-see live viewing. Pogo-stick dancers premiere week, high-bouncing trampoline artists last Tuesday night. You just have to see to believe.