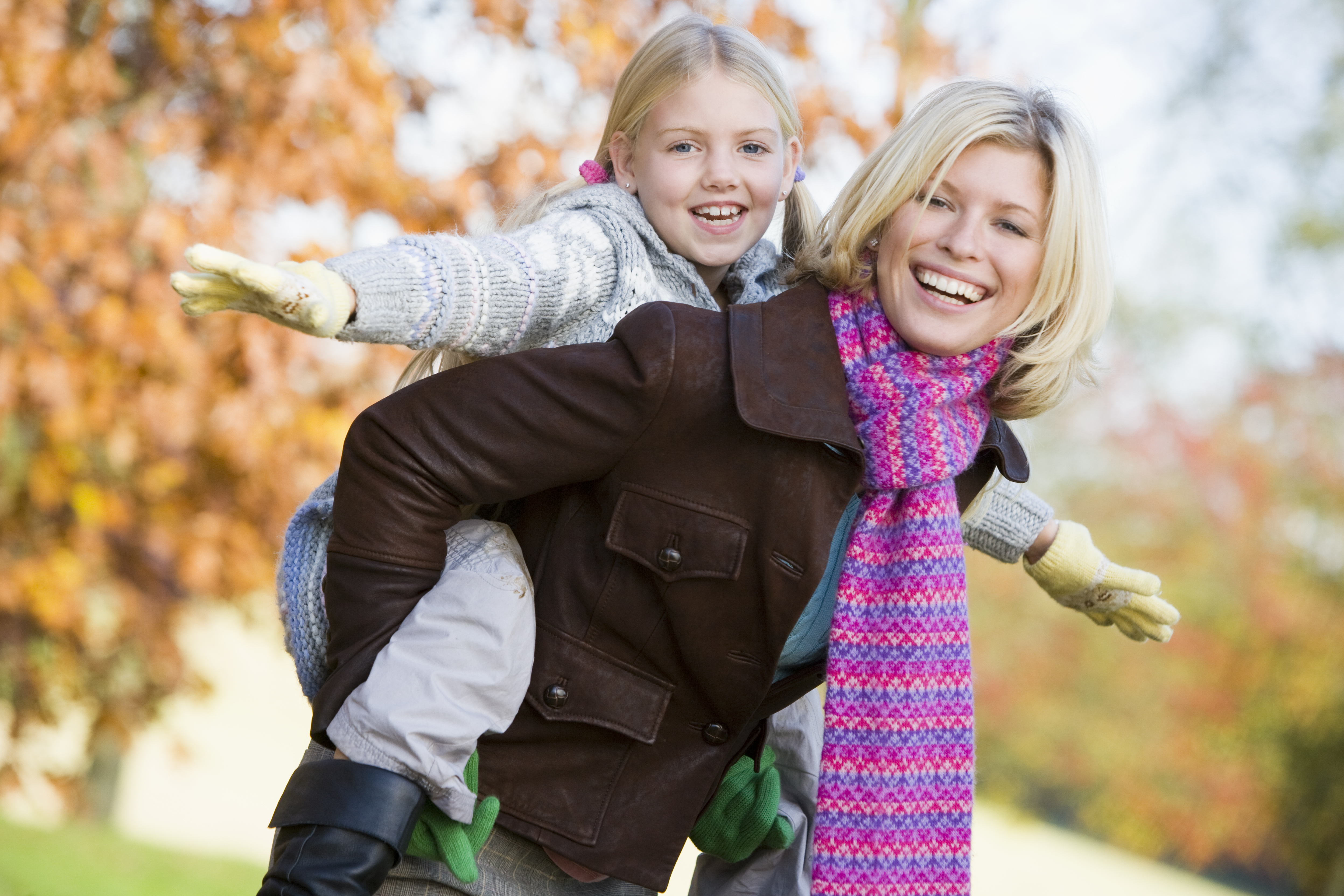 As we continue to process the results of the presidential election, the collection of essays titled What I Told My Daughter: Lessons from Leaders on Raising the Next Generation of Empowered Women, edited by Nina Tassler with Cynthia Littleton and published earlier this year by Atria Books, a division of Simon & Schuster, Inc., seems especially relevant. Indeed, one of the many profound entries in the book – “Future Women Presidents,” by Cecile Richards -- has in recent days taken on additional urgency.

Cecile Richards’ essay contribution to What I Told My Daughter was prescient.  Ms. Richards is the President of the Planned Parenthood Federation of America and the daughter of the late, great former Governor of Texas, Ann Richards.  As Cecile so powerfully states, “I come from a long line of strong women. My daughter is one of them.” She shares a story of her daughter, Hannah, who exemplifies one of the recurring themes throughout this collection of essays -- resilience.

When Cecile became a parent and sent her children off to school she realized, “The world outside wasn’t as feminist-friendly as our family.”  It was clear there was a different standard of achievement goals set for boys and girls: boys were expected to be leaders, girls should be followers. Ms. Richards, never one to sit idly by, reached deep into her family’s matriarchal legacy and became active in creating a club (with teams of other mothers) to provide leadership experience for young girls.

The girls in her daughter’s group named the club “Future Women Presidents.”

What a bittersweet irony.

The deeply personal story Cecile shares is about how her daughter, Hannah, benefitted from not only being a part of an extraordinary legacy of powerful women, but how she embodied the very concept of resilience.  All of Cecile’s children have gone on to stand as passionate and committed supporters of social justice.

MediaVillage.com is proud to reprint “Future Women Presidents” in its entirety.

I come from a long line of strong women. My daughter is one of them.

Growing up, our family was a bit of a matriarchy. My father’s mother, born at the turn of the century, was ahead of her time in pushing for civil rights, and she helped start the League of Women Voters in Waco, Texas. My other grandmother was so tough that legend has it she wrung a chicken’s neck from the birthing bed while in labor with my mom, just to make sure that my granddad had something for supper. Of course, the state of Texas was civilized by women who could hunt, split logs, and live on the frontier. They built schools and communities. They were “doing it all” long before it was a topic of daytime TV, and my grandmothers were of that mold.

My mom, Ann Richards, was no slouch in the strong woman department. She moved from being a 1950s housewife to governor of Texas. Even after her passing in 2006, she continues to be the center of the family solar system in many ways.

With this background, I had plenty of inspiring role models in my youth. But I was in for a shock when I began the journey of raising two daughters and a son. I quickly realized that the world outside wasn’t as feminist-friendly as our family.

By the time the kids were tall enough to reach the candy in the checkout line at the grocery store, I realized that staring them in the face were women’s magazines portraying a bizarre idea of what women grew up to be: fashion-crazed and men-obsessed supermodels. Where were the cover photos of women athletes and astronauts?

But it was only after my twins, Daniel and Hannah, started school that I realized how early their expectations about life were established. Their wonderful teacher handed out awards at the end of the year. The boys got prizes such as “most likely to invent something” or “most inquisitive,” while the girls got “most helpful in class.” I wanted Hannah to get “most likely to rule the world.” I was determined that my daughters would grow up to be self-confident and fearless, along with my son.

As elementary school went on, it seemed like the confidence-building opportunities for Hannah were few. So along with a few other moms and our daughters, we created our own group—one where we wouldn’t have to sell anything or wear uniforms. We asked the girls to name it, and they decided to call themselves the “Future Women Presidents.” They designed their own T-shirts and proudly wore them wherever we went.

Over the next few years, we had great adventures. We toured the White House and practiced at the Press Club lectern. We camped in the Shenandoah Mountains and learned to start a fire and cook outside. We visited the women’s history museum and learned about Mexican artist Frida Kahlo and other adventurous women. We designed a mural and volunteered for community service. We didn’t have a pinewood derby to compete in, but we did the kinds of cool things that the boys were doing.

As Hannah grew up and out of the Future Women Presidents, she took on the toughest assignment imaginable: pitching for her softball team in junior high school.

A terrific softball player, Hannah’s favorite position was shortstop—a challenging role, and one that avoided the spotlight of the pitcher’s mound. But every team needs a pitcher, and someone had to step up—so Hannah volunteered, along with three of her teammates. That meant putting in hours of extra training on the weekends, developing the strategy and technique to be a pitcher. One by one, the others quit, until Hannah was the last player standing.

Learning to pitch turned out to be the easy part. More challenging was learning to rise to the occasion when the team, the coach, and all of the fans and families on the sidelines were counting on Hannah to perform under pressure. As she stood on that mound pitching through some tough innings, I watched Hannah learn how to handle that pressure with grace—fiercely determined to win, but never embarrassed to lose as long as she had left it all on the field. There was one memorable weekend that summed up Hannah in a nutshell: On Saturday, Hannah didn’t pitch particularly well, and her team lost to their archrivals. The next day, undeterred, she volunteered to pitch again. Her infectious determination led not only to one of her best games, but lifted the spirit and confidence of her teammates.

Pitching was her first real leadership role, and Hannah learned an important lesson about going back out on the field, even when her team was losing or morale was down. Those lonely moments on the mound helped her find and develop her willingness to take on challenges going forward. As she worked through high school and then college, she threw herself into campus organizing and later community organizing with the confidence worthy of a Future Women Presidents alumna.

The good news is that all three of my kids ended up being strong feminists, including Hannah’s twin brother. Daniel became the vice president of the reproductive rights group on his college campus, and fought to get birth control access at the college health center. And my elder daughter, Lily, can remember every lesson her governor grandmother ever taught her. Today she is following that advice with a vengeance. Mom’s most important piece of wisdom? Remember that this is the only life we get and do it now—no look-backs, no do-overs.

I’m grateful that my kids are now part of the most diverse, most progressive generation ever in this country. They are passionate and committed to social justice. They are fighters for LGBT rights and immigrant rights and environmental justice. They all give me hope for our future. And I’m confident that one day, they will help elect a future woman president.

Nina Tassler is Advisor and former Chairman, CBS Entertainment. She spent more than a decade as head of entertainment programming for the network, where she shepherded such hit series as “CSI,” “NCIS,” “The Big Bang Theory,” “How I Met Your Mother,” “The Good Wife” and “Criminal Minds.” She serves on the Board of Jewish Family Services, is a member of the Ambassador Council of the Geena Davis Institute on Gender in 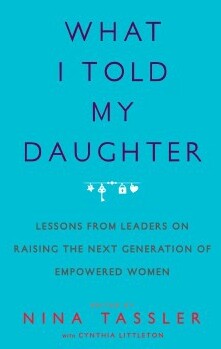 Media and serves on the Academy of Television Arts & Sciences Executive Committee and on the Board of Directors of the Academy Foundation. She is a member of the Board of Trustees for Boston University and the Board of the Paley Center for Media.

MediaVillage.com in April published an excerpt from another essay in What I Told My Daughter – “The Perfect Paradox,” written by author-advocate Peggy Orenstein.

Excerpts copyright © 2016 by Jerry Levine, Inc. from What I Told My Daughter by Nina Tassler with Cynthia Littleton published by Atria Books, a division of Simon & Schuster, Inc.