Aasif Mandvi Returns To Comedy Hosting The CW's "Would I Lie To You?" 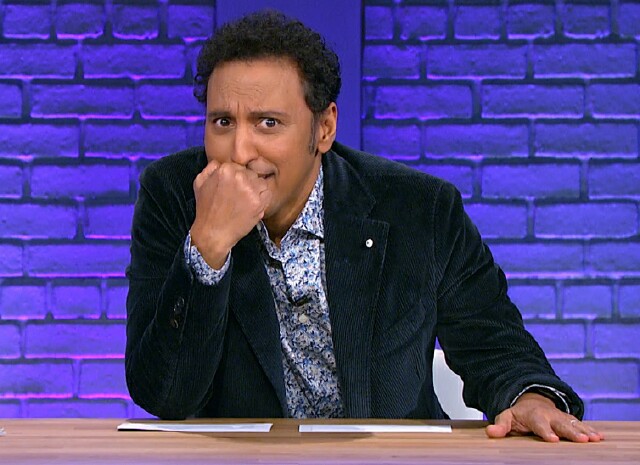 Throughout his career, Aasif Mandvi has been fortunate to not have been "boxed" into one facet of the entertainment industry. Whether doing comedy on The Daily Show, or drama on the critically acclaimed CBS series Evil, the versatile actor is ready to tackle anything. So, it was only a matter of time before he'd turn is talents to hosting a TV show. Now, thanks to The CW greenlighting an American version of his favorite hit British panel show Would I Lie To You?, he's checking another thing off his to-do list. Mandvi fell in love with the show's format while binging episodes of the original on Brit Box. "I was literally like, 'This is great'," he told MediaVillage in an exclusive interview. "There are 14 seasons, and it's still running, so there's a lot of material. My wife and I would just sit at night and binge-watch it.

"I discovered it during the Trump administration," he added. "So, it was a great way to decompress. Then there was the pandemic, and it was just like everything in the world was shit. We discovered the show right before the pandemic in 2019, but it was during Trump, and then the pandemic hit. We would tune in and watch our same favorite episodes over and over. I really do feel that laughter is the best medicine. It's kind of a respite from all the insanity of the world, so to spend 20-25 minutes laughing is just what we need right now."

Before the 2020 lockdown Mandvi mentioned the shows format (celebrities telling stories and a panel guessing if they're the truth or a lie) to Evil's executive producer, Robert King, and the rest is history. "I told him he should check it out," Mandvi recalled. "The next time I spoke to him he told me he was [also] addicted to it. He's in the middle of writing Evil, this very dark supernatural show, so for him, it was the same kind of [escape]. He suggested a U.S. version, and I said, 'Let's make that happen.' The premise is so incredibly simple. It's not a game show, as you are just playing for bragging rights, telling funny stories, and having a great time. It turned out The CW [executives] were also fans of the show. So it all came together, and it happened." 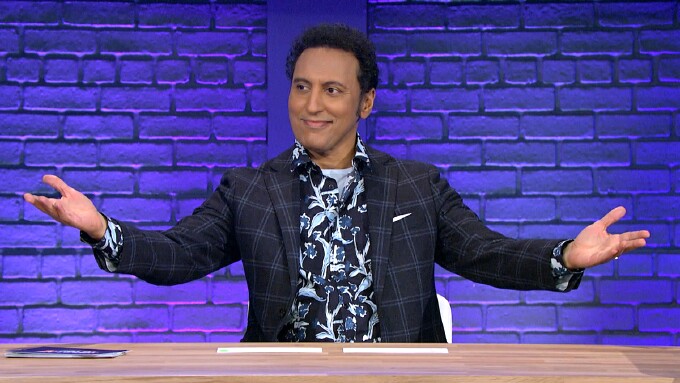 Mandvi didn't envision himself as the show's host, but once the cogs of production started whirling, and he was on board as an executive producer, things changed. "I really just said, 'Oh, I think a great host would be … let me think?" he laughed at his appointment. "Of course, it all had to be run by The CW, and all of my [producing] partners in this, but everyone thought, 'You know, that would be great.' So, I was lucky they agreed with me. Sometimes you do things for the money, sometimes you do things for the joy of it. This was for the pure joy of it."

Rounding out the show's permanent cast fixtures are team captains Matt Walsh and Sabrina Jalees, who moderates the rotating teams of weekly guest personalities. "The British show has three white guys at the center," explained Mandvi. "We knew we wanted a man and a woman, and more diversity on our show and with the guests. I'm South Asian, Sabrina is half Pakistani and half Canadian. We reached out to Matt, from Veep, and when he said he was totally game and excited to do it, we looked for a woman. I wasn't too familiar with Sabrina, but I'd seen her at the CBS Upfronts when she did Carol's Second Act with Patricia Heaton, and I'd seen her stand-up. We reached out to her, and she wanted to do it. No one is buying a house doing this show; like Matt, it was the same situation with Sabrina. She, and the guests, just came in to have a good time, laugh, and play for a few hours … and that's what comes across on the screen."

When it comes to deciphering whose stories are true -- and whose are a lie -- Mandvi claims to be no expert. What he did learn by hosting the show's 13 episodes is that celebrities are very good storytellers. "That's what I love most about the show," he said. "You have these well-known people revealing stories you'd otherwise never know. Like if Brooke Shields actually did babysit lemurs when she was a teenager? Or did Richard Kind really once give Paul Newman a piggyback ride? Often there is an element of truth in the lie because when people are forced to make up a lie, certain elements of it are true. The actual story may ultimately be a lie, but there are lots of personal revelations throughout the story to make it believable.

"It's also fun to kind of delve into people," he added in closing. "Richard Kind is a great example. I personally know him, so that story doesn't seem too far-fetched at all. But if it's true, you have to make it seem like a lie. You're sort of messing with the other team's heads to outsmart them. There is a bit of strategy to this, and that's what makes it really clever."

Would I Lie to You? is telecast Saturdays at 8:30 p.m. on The CW and is available to stream on all The CW digital platforms the following day.