ABC's "Queens" Is All Sisterhood, Hip-Hop and Second Chances 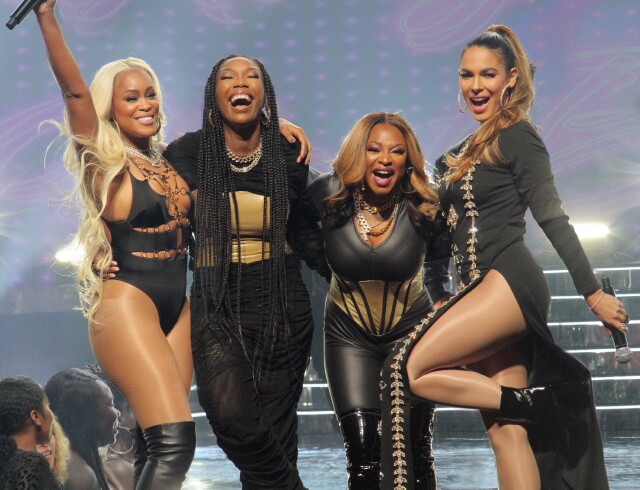 Last week ABC, Billboard and VIBE Magazine hosted a special virtual premiere party for Queens, a musical hip-hop drama premiering Tuesday on ABC. The event was hosted by DJ and cultural curator Brittany Sky, who presented a featurette about the rise and fall of the series' fictional hip-hop girl group Nasty Bitches, a look at their debut music video "Nasty Girl" and a choreography masterclass led by dance group Queens N' Lettos, followed by a screening of the series' pilot and a Q&A with the cast -- Eve, Brandy, Naturi Naughton and Nadine Velazquez (pictured above, left to right). They play four former hip-hop stars who, 20 years after a messy breakup at the peak of their careers, decide to retake control of their fates, get the band back together and relive their glory days with a new meaning and image of what it means to be a Queen.

Brianna "Professor Sex" (Eve), the first of the four we see in the present day, is now married and a mother of five whose marriage is in a shambles. Jill "Da Thrill" (Naughton) went from nightly sex, drugs and partying to a reclusive life of faith but now finds herself in the middle of an affair with a woman. Naomi "XPlicit Lyrics" (Brandy) has gone from badass rapper to singer-songwriter at open mics in Nashville and a rocky relationship with her daughter. Valeria "Butter Pecan" (Velazquez) is the only one of the four to have a successful career in show business, now working as a talk show host on The Shade. Things go south for Valeria, however, after her failed sabotage of a conservative and mildly racist co-host who is hogging airtime.

Just when the former queens of hip-hop think their lives are down the drain for sure, hot up-and-coming artist Lil Muffin, wonderfully portrayed by Pepi Sonuga, gives their chart-topping hit "Nasty Girl" a revival and gets the Nasty Bitches on the world's radar again, so much so that they get to perform their hit and, like a phoenix, rise from the ashes and set their careers ablaze once more.

The series could play out like a happy-go-lucky comeback story, but instead delves deeper and refuses to play it safe, with great results. The Nasty Bitches' resurgence plays out like a true victory over ageism, and women of color persevering in a still overwhelmingly straight, white and male-dominated music industry. They each experience immense growth and don't want to just to relive their glory days; rather, they want to show the world that women of color can take control of their own fates.

While all four stars display incredible range between the two time periods we see of their characters' lives, I have to highlight Brandy, who as Naomi shows the biggest contrast not just in those two timelines, but from her own real-life image vs that of her character. I'm sure all '90s kids remember her genre-spanning career across R&B, pop and hip-hop, her hit UPN sitcom Moesha and her star-making turn as Cinderella opposite Whitney Houston in the classic ABC TV musical.

During the Q&A with the series creators and cast, moderated by VIBE Magazine's Jazzie Bell, Brandy shed light on some of the biggest differences between herself and her character Naomi -- aka "XPlicit Lyrics."

"I love singing, everyone knows that," she began. "I've loved hip-hop for as long as I can remember and dabbled in rap, but I'm not as hard as 'Xplicit.' She's the tomboy of the group and that's not me. I'm more feminine.

"I love this character because I can be boho chic as Naomi and play guitar and then be this hard rapper as 'Xplicit'," Brandy continued. "Like her, I'm also a single mom, but a better mom than Naomi."

Eve shared how it was difficult for her to find Brianna when production started given the many similarities to her own life and career. "We all looked at each other and thought, 'this is spooky,' because we lived through this time and were in the industry back then and we missed performing. It took me a week or two to really find Brianna the way I wanted. I ammarried. I do have four kids. I was out around twenty years ago, and I was also a rapper. What I love about 'Professor Sex' is that I'm able to be a lot more feminine and show some more skin than I would probably be comfortable with just as Eve. 'Professor Sex' has opened me up a little bit," she laughed.

Taylor Sele plays the Nasty Bitches' manager, Eric Jones, who shared what he has learned from the series so far about the different obstacles women in the music industry confront every day. "Women have to balance so many struggles just to get on the scene and share their talents and try to maintain the essence of who they are -- while being mothers, being sisters," he said. "Without getting the appropriate assistance and support they need in society they still have to face that and get the job done while in six-inch heels. Women are incredible. Eric Jones is a very fortunate human being and I'm such a fortunate actor to be working with all of these women."

When asked about the inspiration behind the story, series co-creator and executive producer Zahir McGee shared, "At the core, the show is about friendship and second chances, and that's universal across genders. I'm at a point in my life where I just had my second kid and I'm in my 40s and we think, what does this second life look like?

McGee also recalled his time working on multiple Shonda Rhimes series, including as a writer on Private Practiceand later as a producer on Scandal. "I came up in the Shondaland world where women won every scene and were fully-formed characters," he said. "I was usually the only man in the writers room so I didn't know anything other than that. Being able to put so many characters of color and women of color on screen in a broadcast drama is groundbreaking."

"I love a female empowerment story," said Queens co-creator and executive producer Sabrina Wind. "I love when we've used this forum to show how hard and glorious and wonderful and challenging a woman's story can be. I got divorced a while ago and it changed my life. Knowing that your story is never fully written until you decide it is speaks to me more than anything else."

In closing, Belle asked McGee what he hopes audiences will take away from the series. "I want them to take what these people are bringing to the screen: their heart, their soul and their talent," he replied. "It's undeniably awesome and special. It's been a rough couple of years now and I want people to have fun and feel good and be able to identify with these women, and I want to throw a party every single week."