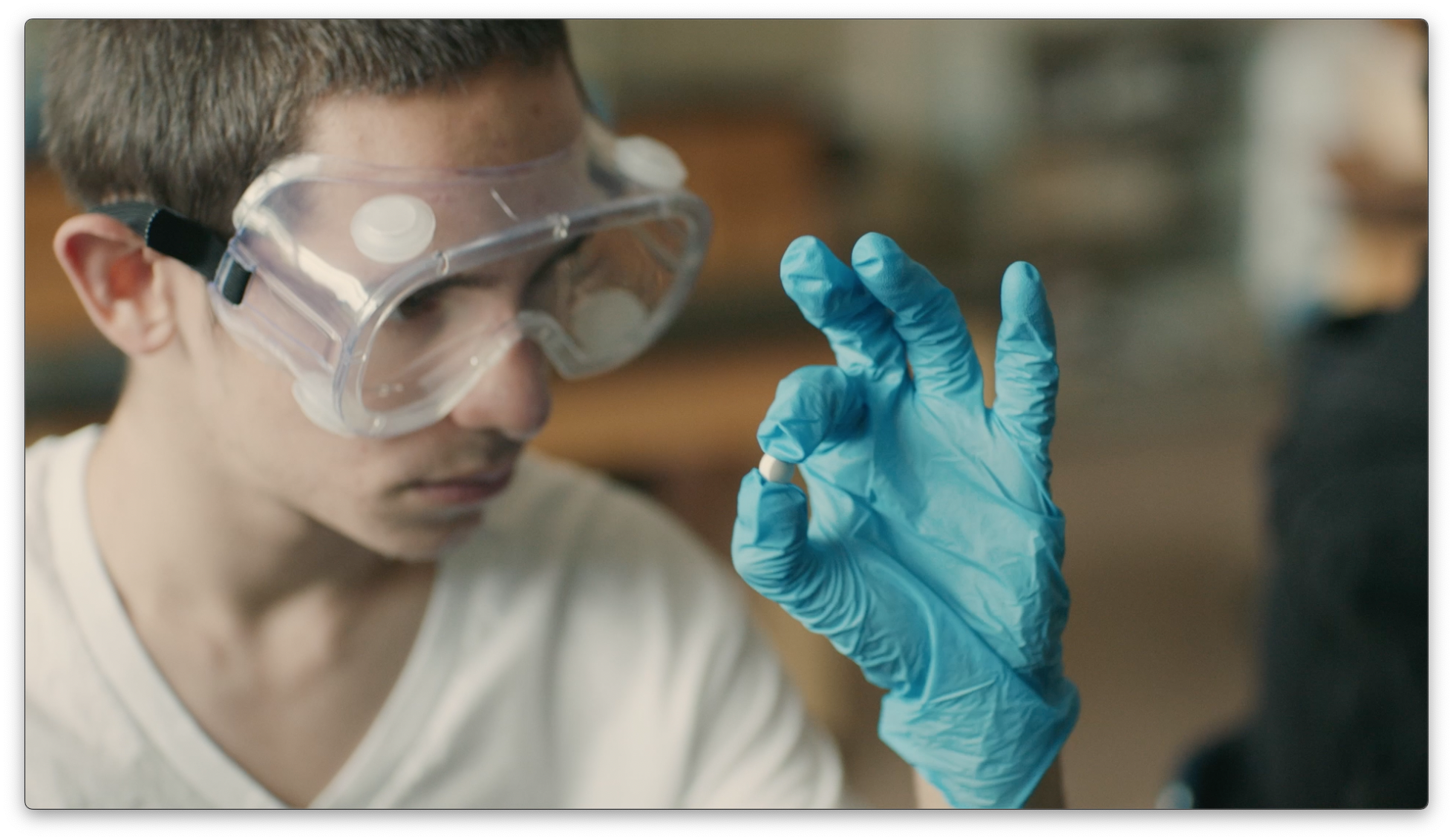 The Ad Council, as part of a coordinated public awareness effort announced earlier this year, has launched part one of a holistic approach to tackle the overdose crisis. Educating young Americans about the dangers and prevalence of fentanyl, the first phase of the campaign is funded by leading technology companies Snap and YouTube, with a separate campaign in partnership with Meta that focuses on informing parents of the drug's dangers launching this Fall.

Drug overdose-related deaths have skyrocketed in recent years, with 2021 seeing a 52 percent increase over the previous two years. The rise in deaths is largely due to the growing presence of synthetic opioids, like fentanyl, which were involved in an estimated 66% of overdose deaths during this time period.1 Over 190 people die each day from overdoses involving synthetic opioids like fentanyl. While 79% of teens say stress and anxiety are common reasons to misuse prescription medicine, 73% report they hadn't heard of the risk of fentanyl being added to counterfeit pills.2

"Young Americans are dying of fentanyl overdoses at a staggering rate and the time to act is now," said Lisa Sherman, President and CEO of the Ad Council. "We're so grateful to all our partners who are joining us in the fight against the overdose crisis and delivering critical information during a time of need. This powerful coalition is uniquely qualified to reach and influence young people and will allow us to make an extraordinary difference and save lives."

Illegally manufactured fentanyl has become increasingly prevalent, appearing as a contaminant in illicit powdered drugs and being used to create counterfeit prescription pills. Many young people are unaware of this shift, meaning that there is an increased risk of unexpectedly coming into contact with fentanyl.  The campaign, Real Deal on Fentanyl, is funded by Snap and YouTube and looks to educate young Americans on the dangers of fentanyl and the likelihood of it being in counterfeit prescription pills and illicit drugs.

Developed pro bono by creative agency JOAN and produced by JOAN Studios, the youth-oriented work aims to help young Americans understand the deadly reality of fentanyl-laced drugs, working with unexpected yet highly qualified sources to educate them on these fake drugs: former drug dealers. Shatterproof, a national non-profit dedicated to reversing the addiction crisis in the U.S., served as an issue advisor to the campaign production – in conjunction with Second Chance Studios and JOAN who worked hand-in-hand with these former drug dealers to develop classroom-style lessons that offer hands-on learning opportunities to educate young people on the dangers of fentanyl. The content was captured at Holyoke High School in Holyoke, Massachusetts, an area especially affected by the crisis. Taking over the school for the day, former drug dealers stepped in as teachers – or "substitute dealers" – to educate students about the fentanyl crisis through the lens of their everyday class subjects. The pilot effort was captured by a documentary team, and the lessons will be edited into snackable content custom-tailored for social, digital and linear media. The lessons and resources for youth to learn about the dangers of fentanyl, how to reduce their risks, ways to help a friend, and other life-saving tools will also be available at RealDealOnFentanyl.com, the campaign website developed by Viget and Good Works, Inc. Additionally, as part of this national youth fentanyl awareness campaign, Snap will launch a series of new Augmented Reality lenses, filters, stickers and content that amplify the campaign's messaging across its platform and SXM Media's Studio Resonate has developed a series of audio PSAs to run in targeted donated media across their platforms and additional publishers. This multi-channel effort is designed to reach young adults across the country, getting them the facts on fentanyl through an interactive yet unconventional program in hopes that intercepting them during this impressionable time will potentially save their lives.

The former dealers featured in the Real Deal on Fentanyl campaign creative -– Didi, James and Kyle -– come from diverse backgrounds, each with different experiences with drugs, fentanyl and recovery education: an addiction recovery coach, a substance abuse counsellor and a member of Second Chance Studios which helps formerly incarcerated people find new careers as digital educators. All of them are people who have dedicated their lives to helping educate and help people avoid substance use or recover from it. They were instrumental in developing this work, candidly sharing their personal stories and connections to fentanyl with the production team and youth, as well as their personal work as sober coaches and helping others through the recovery process. Audiences are encouraged to learn more about them and their individual journeys on the campaign website.

"We're proud to be partnering with the Ad Council on this unprecedented effort to raise awareness and educate young people and parents around the dangers of counterfeit pills laced with fentanyl," said Jennifer Stout, Vice President of Global Public Policy at Snap, Inc. "As we continue to do our part to combat this national epidemic, support law enforcement investigations and educate our community through in-app tools, we recognize an industry-wide approach is needed. That's why we're grateful for this collaboration and remain committed to bringing every resource to bear to keep fighting this crisis both on our app and across the tech landscape."

"Fentanyl has permanently altered the course of so many people's lives, leaving devastated families and communities in its wake. It's critical that we educate young people on the dangers and prevalence of fentanyl and help them understand the threat. We're proud to be a part of this initiative and hope that it helps turn the tide on a deadly epidemic that has ended far too many lives far too soon." -- YouTube

"It may seem strange at first to think these students might trust a former drug dealer more than a traditional authority figure. But Gen Z is notoriously independent – they use information to make their own decisions. That's why we took this pioneering new approach. It's hands-on fentanyl education from former dealers, frankly discussing the things that grownups normally wouldn't dare. Yes, it's unorthodox, but we must keep kids alive. We are so proud to partner with the Ad Council on this urgently important campaign" said Jaime Robinson, co-founder and Chief Creative Officer, JOAN Creative.

This unique set of partners, in addition to trusted messengers will play a significant role in the campaign's success reaching young adults. These digital content creators and influencers will be sharing experiences they have had with fentanyl in their families and communities, providing real world examples in addition to relevant lifestyle creators sharing information on the drug's dangers. Understanding that teens and young adults ages 16-24 spend an average of over three hours on social each day, ensuring that messaging resonates with our audience and reaches them where they spend much of their time is incredibly important.

Media partners and social platforms including CSMG/EsportsU, Reddit, Reddit's KarmaLab, Snap, SXM Media, TikTok, Twitter and VICE Media Group will also provide resources to extend the youth-targeted campaign messaging and creatives. These partners will play a critical role in donating media space as well as the development and distribution of content to educate young people about fentanyl and its dangers. Non-profit Song for Charlie is serving the campaign in an advisory capacity alongside a panel of public health organizations and issue experts to provide key insights, data and ensure all aspects of these initiatives are accurately and medically informed.

As a follow up to the youth-targeted campaign funded by Snap and YouTube, Meta's Creative Shop is launching a creative campaign this Fall focused on informing parents and caregivers about the dangers of fentanyl. The new work centers on education and honest conversations, ensuring families are prepared to create open, candid and meaningful dialogue. In addition to video content, Meta has developed supplementary tools designed to engage audiences like polls, stickers and more. They will also be donating advertising space across Facebook and Instagram to increase the reach of this campaign.

Additional efforts from the Ad Council's holistic approach to the overdose crisis to help individuals with substance use disorders navigate resources and start their recovery journey are currently in the research and development phase. The subsequent efforts will feature a suite of PSAs in addition to platform-specific activations and robust ground game components such as faith-based programs, trusted messenger strategies, employer engagement and open-source toolkits. These components are designed to also equip other organizations and nonprofits, enabling them to leverage the Ad Council's research and content to bring important messaging to their communities.

To learn more about the Real Deal on Fentanyl campaign, or to access information about the dangers of fentanyl, please visit RealDealOnFentanyl.com.

The Ad Council has a long history of creating life-saving public service communications in times of national crisis, starting in the organization's earliest days during World War II to September 11th and natural disasters like Hurricane Katrina and Hurricane Sandy and, most recently, leading the industry's response to the COVID-19 pandemic. Its deep relationships with media outlets, the creative community, issue experts and government leaders make the organization uniquely poised to quickly distribute life-saving impactful information to millions of Americans.

The Ad Council is where creativity and causes converge. The non-profit organization brings together the most creative minds in advertising, media, technology and marketing to address many of the nation's most important causes. The Ad Council has created many of the most iconic campaigns in advertising history. Friends Don't Let Friends Drive Drunk. Smokey Bear. Love Has No Labels.

2. According to research by Morning Consult commissioned by Snap Inc. in July 2021. Available at: https://assets.ctfassets.net/gqgsr8avay9x/5EolnMWMUxEQdvGoMVFFJW/92e882a47bc8119aead9589ca95631dd/Dangers_of_Counterfeit_Drugs_and_Fentanyl_-_Key_Findings.pdf