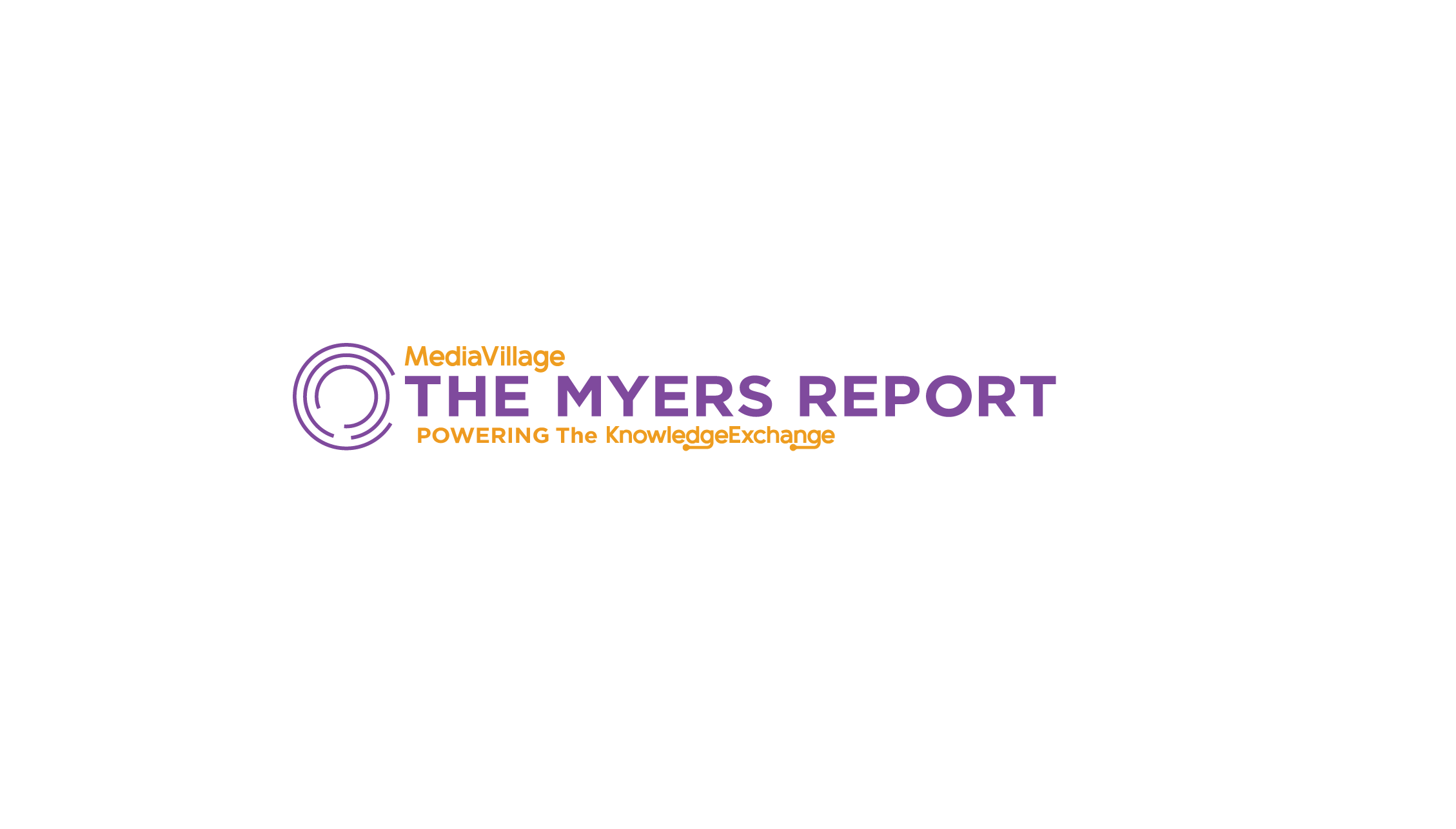 Offering hope to a community that has finally begun to focus on diversity activism over advocacy, the percent of young Black and Hispanic team members at agencies and advertisers has increased significantly in the past year, although the percentage of diverse senior executives has remained unchanged, according to The Myers Report industry census data. The survey was conducted earlier this year among 700 advertiser and agency executives. Scroll down for details on sales organizations that are rated by agency and advertiser survey respondents among the leaders in commitment to diversity activism. 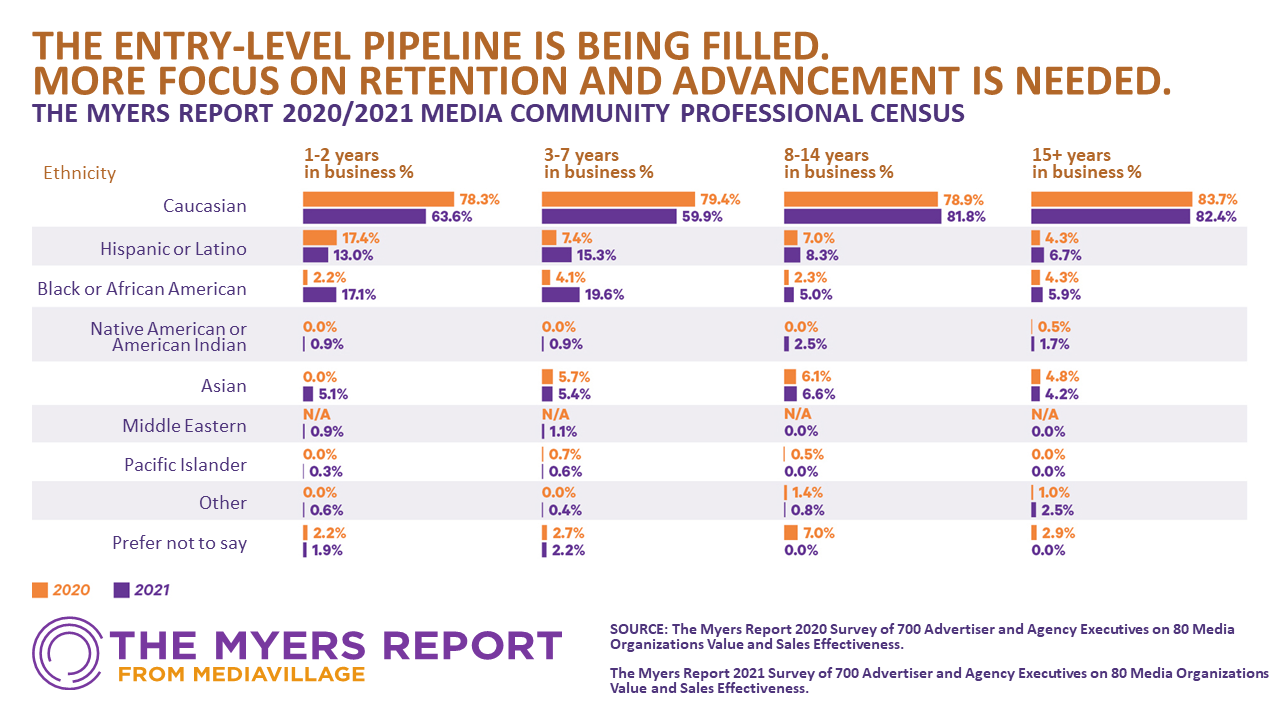 Among Black, Hispanic and Asian professionals at agencies and advertisers, more than 70% positively rate the commitment of most sales organizations with which they have a professional relationship. Among this diverse cohort, BET ranks at the top of 60 sales organizations for their commitment to team diversity, with AARP, Amazon, New York Interconnect, TikTok and Vevo close behind. Rankings are based on percent positively reporting on each organization with which they are in a business relationship (Top 2 box on a 1-6 point scale).

Among all respondents who have been in the business fewer than eight years, The Weather Channel, which is owned by Byron Allen’s Entertainment Studios, ranks first with Buzzfeed and BET also among the industry leaders as rated by professionals in the business 8+ years. Among ‘legacy’ (pre-digital) media sales organizations, only New York Interconnect, NPR, A+E Television Networks, DISH Media and The CW are among the top 20 rated organizations.

Among all advertiser and agency respondents to The Myers Report survey, TV One ranks at the top for commitment to diversity, followed by New York Interconnect, Vevo, BET and WarnerMedia. TV One, a division of Urban One, is led by Alfred Liggins. The Howard University School of Communications is named after Cathy Liggins Hughes, Urban One founder. The ‘HC School of C’, as it’s known, is being honored as a 2021 Advancing Diversity Hall of Honors Inductee by MediaVillage and AdvancingDiversity.org at its planned September Induction Experience.

Of the 60 media sales organizations rated by advertiser and agency professionals for their commitment to diversity activism, 20 generated more than 75% top 2 box performance on the six-point scale. Facebook, among the most proactive voices for diversity in trade communications, received a 69% positive rating, although the undifferentiated Instagram sales organization slipped into the top 20 at 74.9%. 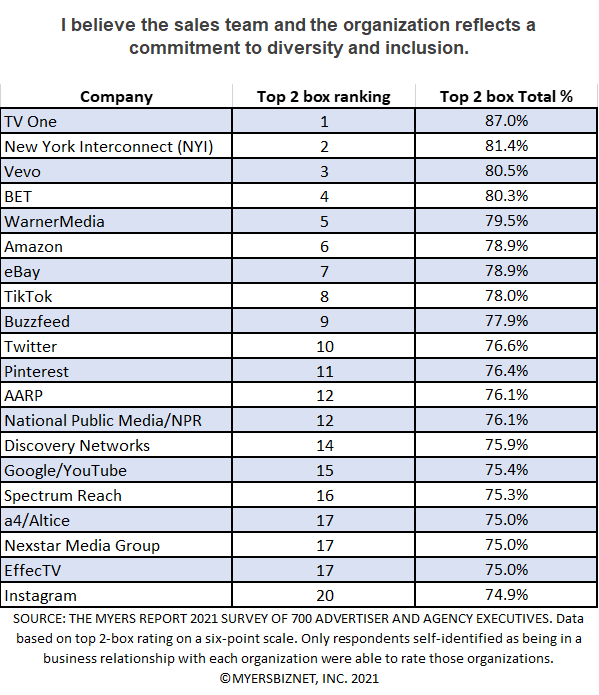