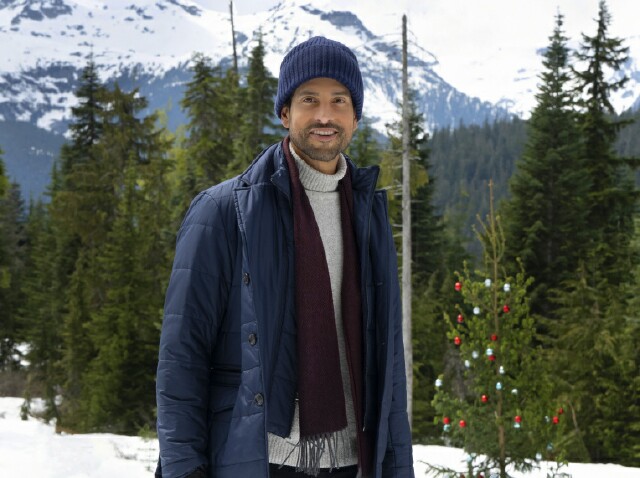 In the nearly quarter of a century that Adam Rodriguez has acted on TV, he's never had a leading role -- until now. Rodriguez, who started on NYPD Blue, became well-known on CSI: Miami and in the Magic Mike movies and has worked steadily all these years, takes his first star turn Sunday, December 12 in CBS' "A Christmas Proposal."

"I am baffled by it too," Rodriguez told MediaVillage in an exclusive interview. "And I don't mean that from a cocky standpoint. Yeah, it is an odd thing; so many people I know in this business have had this opportunity so many more times than it presented itself to me. Not that there were tons of leading roles being handed out to Latin leading men. It's just not who they were looking for. It's nice that CBS is in a place now where they are aware of making those kinds of choices."

Some of the choices in A Christmas Proposal are his. That's because Rodriguez is experiencing another first on this: executive producer.

"Being an executive producer was something I wanted to make contingent upon making my acting deal," he explained. "All the years I am doing this I have directed and written and I wanted the latitude to bring my sensibility to the project knowing I was going to be the lead."

Shot over three weeks in Vancouver with Latinos in the main roles, the film focuses on an upper-middle-class family that has achieved the American dream as top lawyers. The plot centers around Rodriguez, as Julian Diaz, a hard-charging attorney who wants to follow in his father's footsteps and run the family firm. However, his father is considering appointing Julian's brother because he seems more settled and has a family.

"It was really important to me that we were not a first-generation family," Rodriguez said about the Diaz family. "We wanted them to look and feel and sound like they had been Americans for more than one generation. Yes, new immigrant stories absolutely need to be told for any ethnic group. They are always a struggle, but that's not who these people were." 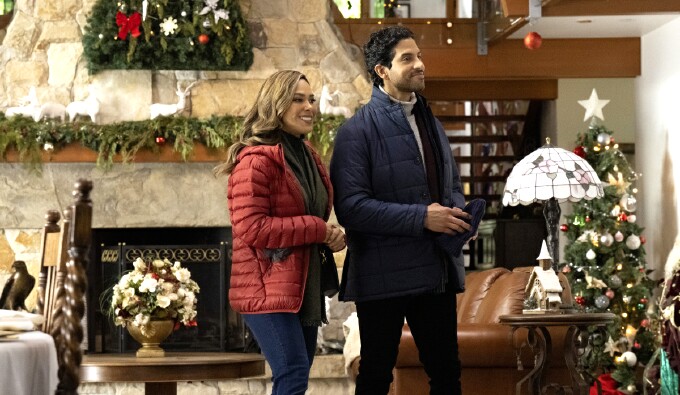 The title broadcasts what happens. Julian and Maria (Jessica Camacho, pictured above with Rodriguez) meet when she picks him up -- as a fare. A chef whose dream is to own food trucks, Maria also drives for a ride service. The trip to his family's exquisite home is long enough for her to recognize that Julian is a self-centered jerk. When he leaves his phone in her car, Maria returns it and unwittingly becomes entangled in Julian's spontaneous lie that she's his girlfriend. Of course, they dislike each other, and then they fall in love.

The film, which ushers Christmas movies back onto CBS for the first time in 11 years, is one of a couple of current projects for Rodriguez. He serves as a judge and mentor on Finding Magic Mike, premiering on HBO Max December 16. It's a competition series for guys who need to get their groove back. (Rodriguez was one of the  dancers in Magic Mike.) He's also had a recurring role on Ordinary Joe, an NBC freshman drama.

So, he attended public school, thinking he might be good enough for pro baseball.

"I was told by enough people who knew what they were talking about that it was possible," Rodriguez said, but without that whiff of melancholy that often shrouds a high school jock's memories. "Between injuries and a lack of discipline -- the kind of discipline it requires to be successful at anything -- baseball was not going to happen."

He enrolled at Rockland Community College where he had a GPA of around 0.81. Then he decided to become a stockbroker. Two weeks shy of obtaining his license, he had an epiphany while listening to a motivational speaker. However, it wasn't what the speaker intended.

"He was talking about how to swim with the sharks without getting eaten alive," Rodriguez recalled. Even though the speaker's props included a sledgehammer and a cinderblock, he found himself focusing on the audience. "Nobody there looked healthy or happy or wanting to be there, and I realized I could end up getting stuck in this life," he said. "The Ghost of Christmas Future visited me in that moment. I could start to like it and make this money. [Instead], I quit."

Rodriguez knew he liked acting. He got himself hired as an extra, worked as a hotel bellman, did demolition work on construction sites, bartended, and waited tables. His dad had a buddy, a consultant onNYPD Blue.That old friend invited Rodriguez to a dinner, where the aspiring actor chatted with another guest.

"It turned out his friend was David Milch (creator and producer of NYPD Blue)," Rodriguez said. "I just enjoyed talking to him, and he said, 'We are creating this new show, and there is a character we would like you to audition for.'"

Now, he'd like to produce more, and spend time with his family of two girls, 7 ½ and 5, and his 18-month-old son. When Rodriguez considers goals, he cites personal before professional.

"First and foremost, just really being the best husband and father I can be is always the top of the list," Rodriguez concluded. "In terms of work, just making good choices for myself. Over the years, I have always been lucky enough to land in places I enjoy being, to hopefully get an opportunity to continue to do work I can find some satisfaction in doing."

A Christmas Proposal premieres Sunday, December 12 at 8:30 p.m. on CBS. It will also stream live and on-demand on the CBS app and Paramount+.