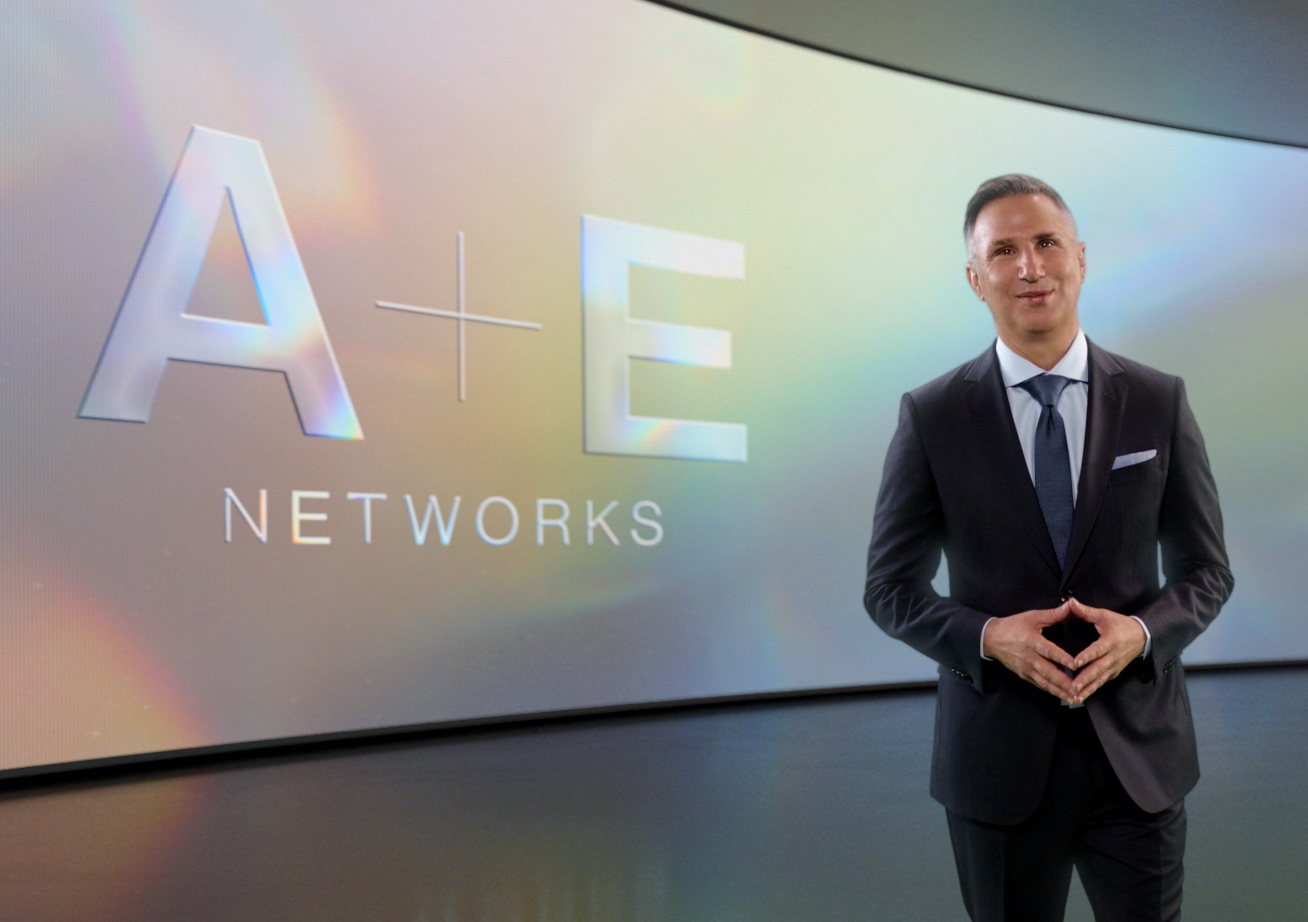 The Big Message: Count on A+E's trio of linear basic cable channels to double down on the genres of content that produce consistent viewership and ad support. For A&E, that's unscripted series, miniseries and specials. For The HISTORY Channel, semi-scripted and unscripted programming dominates. At Lifetime, the focus remains on original made-for-TV movies, increasingly featuring women on-camera and as producers, writers and directors. A second big message: diversity will play a bigger role in what A+E Networks will present on all its services. "Everyone matters, and every person counts," declared Paul Buccieri, A+E Networks President and Chairman. "We are changing the way we approach the business."

Host(s): Paul Buccieri (pictured at top) and Peter Olsen, the organization's Advertising Sales President, bookended the half-hour presentation, with Buccieri offering most of his remarks at the start and Olsen encouraging various sponsorship opportunities, including addressable and shoppable commercials, near the end. Both were center stage, surrounded by an impressive virtual videowall. The sequences in-between featured celebrity testimonials and voice-over narration.

What Worked: Turning most of the time over to the celebrities and the content they will oversee next season, including Morgan Freeman, Mary J. Blige, Peyton Manning, Leonardo DiCaprio and Kelly Hu.

What Also Worked: Using diversity as a thread of the presentation from beginning to end, instead of in just one sequence. The end result: a deeper, more comprehensive reflection of commitment to more inclusive content and audience outreach.

What Worked … to a Degree: Introducing "4UV (For Unheard Voices)," a new channel launching this fall through smart TV set and device distribution. Kudos for making the announcement early on in the presentation and offering clarity about the channel's goal of presenting original fare that addresses the spectrum of multicultural and specialized communities. But some hints about the kind of content forthcoming from 4UV would have generated more positive buzz with both advertisers and the public.

What Didn't Work: Given the network's massive popularity, Lifetime's section came off as too short compared to the time allotted for A&E and The HISTORY Channel. Plenty of made-for movie clips, and few moments with the movie makers.

Data Points: For total day ratings, A+E Networks has all its fully distributed networks ranking in Nielsen's top 20 standings among adults 18 and up.

News: Nearly 2,000 hours of new first-run programming will premiere on A+E's channels this season, grouped into four categories -- historical/documentary, biography/pop culture, movies/features and lifestyle. About 200 hours will occupy A&E's expanded Home Made Nation daypart alone, presented Sunday morning and afternoons. Also, A&E's long-running Biography series will increase its episode count, including 35 devoted to WWE legends. Upcoming semi-scripted miniseries on The HISTORY Channel will cover the lives of Theodore Roosevelt this Memorial Day weekend and Sitting Bull in 2023. Peyton Manning's production company will serve up a pair of HISTORY series -- HISTORY's Greatest of All Time (countdown of famous people in various walks of life, hosted by Manning) and The Einstein Challenge (game show where two experts explain circumstances from volcanic eruptions to airplanes in flight to a group of kids). Look for Lifetime original movies starring or produced by Whoopi Goldberg, Angie Harmon and Jenna Dewan in the months ahead.

"The greatest documentaries inspire questions. All it takes is a great team." -- Morgan Freeman

"We don't just tell stories. We put our own spin on them." -- Questlove, co-producer of upcoming A+E miniseries James Brown: Say It Loud.