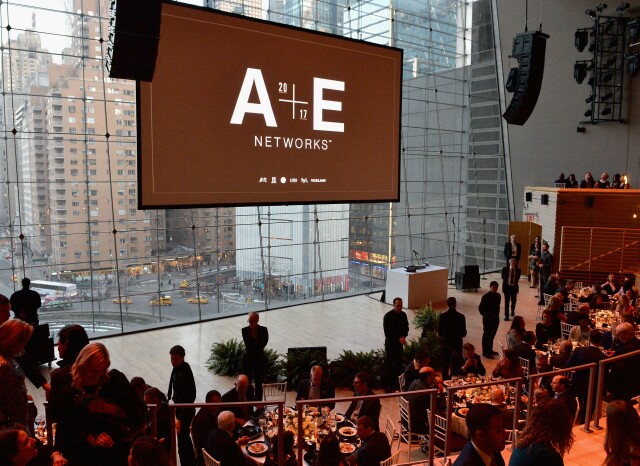 Three weeks after Nickelodeon opened the 2017 Upfront event season earlier this month, A+E Networks came through with event No. 2 this past Tuesday night.

(Editor’s Notes:  This column features reporting by Janet Stilson. Also, starting with this column we are adding two categories to our Upfront and NewFront reviews:  Data Insights, spotlighting unique research-derived conclusions or themes, and Innovative Opportunity, looking at new audience-building or reaching projects.)

Venue:  Two-for-two with Jazz at Lincoln Center. However, where Nick used Rose Hall, A+E Networks settled inside the open multi-level space with the wide view of 59th St. and Central Park behind the stage. Pre-presentation, there was an art gallery of large black-and-white photos of people which represented their audience. Beside each photo was a little digital screen on a pedestal which provided statistics and messages intended to convey how their audience members think, or who they are. Example: One screen read "The Power of Possibility" in large type, and then in small type read "Women Who Say 'I Can,' When Others Say 'She Can't.'" That screen then switched to "Sisterhood Is Universal" in large type.  (There was no survey attribution for any of the messages offered throughout the gallery.) Other screen mottos included "Intelligence is Confidence" and "Champion Diversity." Attendees found tables and chairs inside the room, arranged dinner style. Grade: 4 Jacks 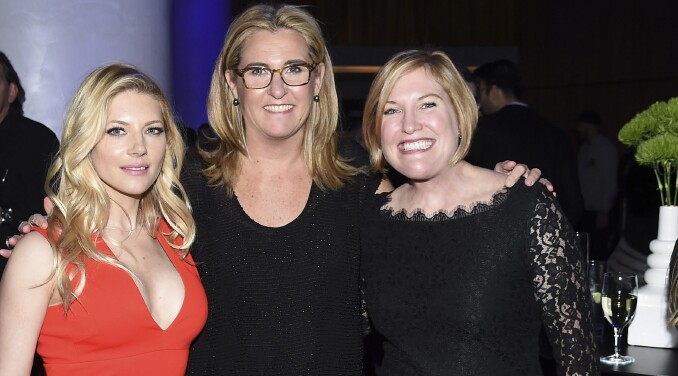 Presentation:  Heavy on monologues, where individual A+E executives detailed their personal lives and the role TV played in them. Sizzle reels from various programs separated each monologue. Using a twist on the closing monologue in The Glass Menagerie by Tennessee Williams (now on Broadway in a revival starring Sally Field), A+E Networks President and Chief Executive Officer Nancy Dubuc commented that "the shortest distance between two people is entertainment," then talked about her grandmother, who apparently raised her, watching General Hospital and Tom & Jerry cartoons with her after school. Saturday night was "holy grail" TV time in the Dubuc household, featuring a menu of Fantasy Island, The Love Boat and Saturday Night Live.  On a more poignant note, audience insights department staffer Marcela Tabares, who migrated from Columbia to the U.S., said that "TV became my compass" to navigate the new culture she was thrown into, gaining a "social identity" to live by.  Intervention impacted program development executive Devon Graham Hammonds because her sister was an addict.  That made Hammonds feel she needed to work for A+E.  "I came to the conclusion that while we don't make shows for ourselves, we make shows from ourselves," she said. (Dubuc is pictured above, center, with Vikings star Katheryn Winnick, left, and Hammonds.)  Grade: 3.5 Jacks

News:  Biography, for years A&E's flagship program in both weekly and nightly editions, at one point graduating into a separate network, will make a multi-channel comeback.  Instead of weekly or nightly presentation, new episodes will be presented as two-hour specials or miniseries on A&E, History or Lifetime, depending on the subject. The initial lineup of profiles includes Vladimir Putin, Mike Tyson, Biggie Smalls and Elizabeth Smart, with the first episode playing later this spring.  At History, work is underway on The Commanders, a set of miniseries (four to 10 episodes each) on key moments in U.S. history as witnessed through various Presidents. In play for the first miniseries coming in 2018: Ronald Reagan, Franklin D. Roosevelt, Theodore Roosevelt, Bill Clinton and Thomas Jefferson. Lifetime's forthcoming attractions include made-for-TV movies on the Flint water crisis (executive produced by Cher), Michael Jackson (coming May 29) and the Elizabeth Smart kidnapping.  The channel also has two unscripted series in production: This Time Next Year (emotional journeys of ordinary people with So You Think You Can Dance host Cat Deeley) and Model Moms (former Real Housewives of Beverly Hills star Yolanda Hadid coaching teen models and their mothers to succeed on and beyond the fashion runway). Grades: 3 Jacks for all that news; 1 Jack for not announcing it during the presentation.

Host:  Ad sales head Peter Olsen bookended the monologues and generated plenty of comic relief to the entire proceeding. Olsen probably made many in the audience very happy after declaring that there would be no data presented, leaving that task to his team when they called on agencies and advertisers individually. Grade: 4 Jacks 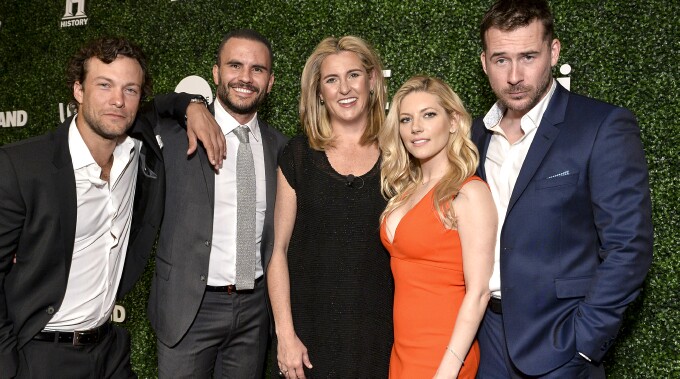 Star Time:  Limited to shout-outs for celebrities (including Katheryn Winnick of History's Vikings and cast members from History's Six) sitting on the bottom level of the auditorium. The notable exceptions: Violinist Ezinma, who looks like a young Tina Turner (with the kind of wowza outfit you'd expect from Turner, and the huge hair), doing her thing pre-presentation; a performance by hip-hop artist Lizzo and an appearance by new Viceland hosts Desus and Mero, who interrupted Olsen’s memory moment (with references to a Farrah Fawcett poster and Fonzie-type leather jacket) with some funny lines. "The most important thing in advertising is being early on a cool thing," Mero told the crowd. "If you advertise here, you’ll be in early on a cool thing. Trust me, I’m mad f--king cool." Noted Desus: "On the streets I’m also known as Young KPI." (Nancy Dubuc and Katheryn Winnick are pictured above, center, with Six stars Kyle Schmidt, left, Juan Pablo Raba and Barry Sloan, right.)  Grade: 3 Jacks

Cuisine:  Plenty was served before and after the presentation. Best eats: filet mignon; scalloped potatoes; salad featuring squash, thin beet slices, watercress and citrus on a bed of white creamy dressing, and short rib slices. Worst eats: most of the slider appetizers.  (Note:  Cuisine ratings do not figure into the overall Jacks score.)  Grade: 3.5 Jacks

Data Insights:  None offered, as promised by Olsen. Therefore, no Jacks grade.

Innovative Opportunity:  Joining forces with Live Nation and Main Street Advisors on a $9 million investment in Millennials/Generation Z-minded content house Beautycon Media.  Beautycon specializes in fashion and beauty-oriented digital media, and under CEO Moj Mahdara's leadership the company has branched out from Internet sites and videos to community events.  Lifetime will explore a number of relationship pathways, on and off TV, with Beautycon.  Grade: 4 Jacks

Overall Grade:  4 Jacks  One of the more personal and intimate events of this nature in several years, thanks to the monologue approach that combined life stories with how TV shapes those lives. It took courage on the part of some A+E executives to go public about difficult aspects of their own lives.

Next up: Scripps Networks Interactive