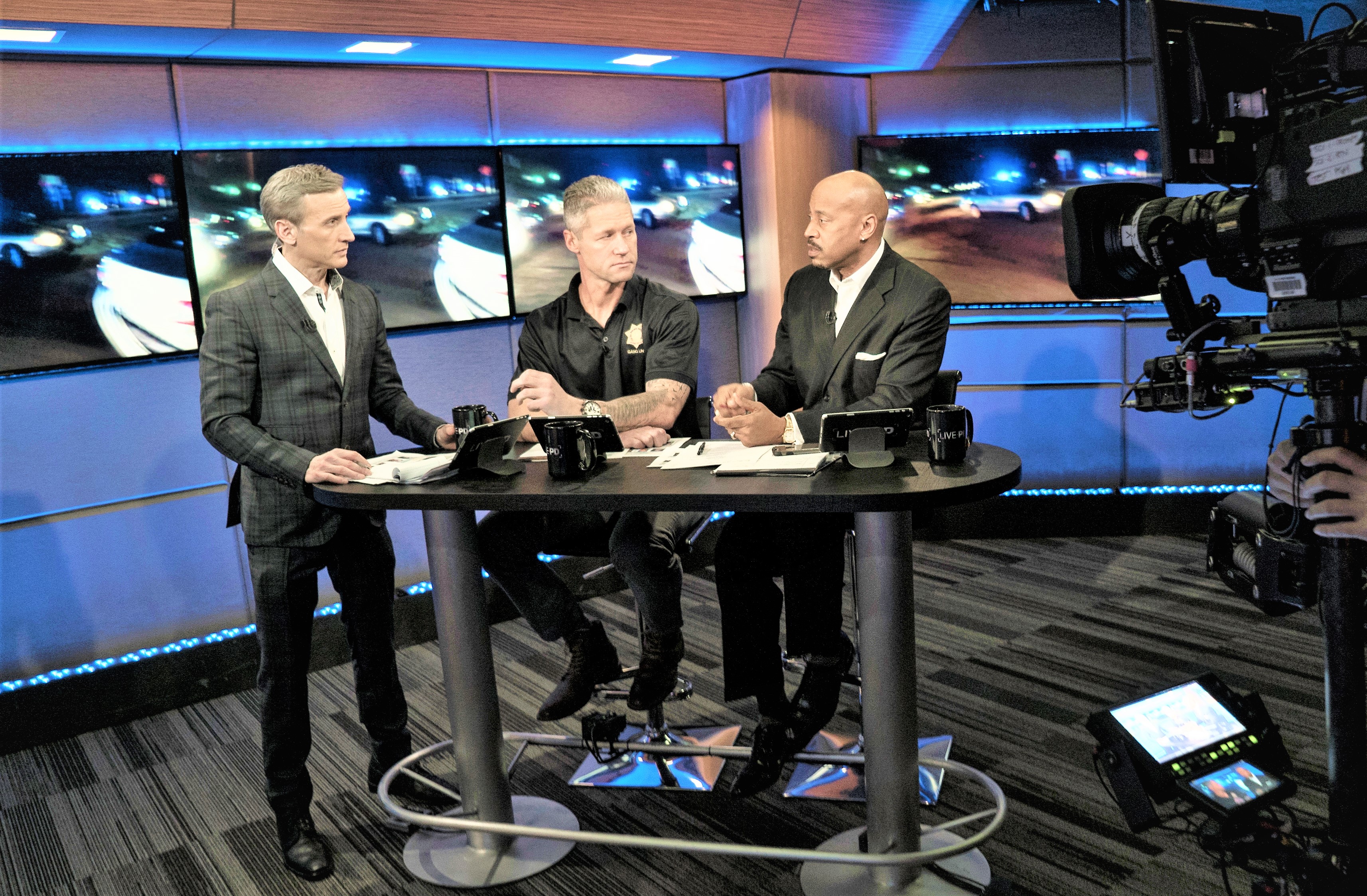 For all of the hype that once swirled around reality television, it was never real and hardly brave.  The shows were considered real because the players were not memorizing lines, though ideas about what to say were often fed to the players.  In this context, brave usually meant someone dared go without makeup for a close-up!  Then there is the genuine real deal, when a show ventures into cinema verite, as does A&E's Live PD.

"People more than ever are demanding real reality," said the show's in-studio host Dan Abrams (pictured at top, left) in a recent conversation.  "There was a period when reality shows were the rage. They were kind of pumped-up versions of reality, and increasingly people came to see them as being phony, staged and fake.  Now people want something real, genuine."

Produced by Big Fish Entertainment, this three-hour unblinking look into police on the job has become a hit for the network.  It fits precisely with what A+E Networks' Chief Marketing Officer Amanda Hill outlined in committing to the company's branding campaign on the power of stories.

A&E's specific goal is to present brave storytelling.  "What we are doing here is watching some very brave officers doing what they do," Abrams said. "With the A&E brand of authentic, real-life experience programming, you are getting inside the minds of a lot of different kinds of people, everything from the horror of what happened to Elizabeth Smart to something a lot lighter in the form of Wahlburgers.  The thread in all of this is unlike reality shows, which often feel fake.  This feels authentic."

The show, positioned as a "documentary series," which is telecast Friday and Saturday nights, has been hovering around two million viewers a week -- extremely respectable numbers for what have traditionally been TV's most lackluster nights.  Even better, Abrams noted, is the age range of the audience, about half of which is comprosed of adults 25-54, a demographic prized by advertisers.

The show resonates because it is true.  "People are interested in what police officers do and it's a different way to look at it," he said.  "This is not a show that's on steroids all the time, where it is a cop show and everything is high octane.  This is a different kind of show.  This is much more based in the day to day."

Abrams has a rare vantage point for how crime and punishment coverage has evolved over the years.  An an attorney, he covered the O.J. Simpson trial and has been a steady on-air presence ever since.  On Live PD he easily meshes his legal background with journalism; as a result he presents highly dramatic arrests without the hysteria that can accompany such situations.

He acknowledged that viewers could well be seeing the best cops on the respective forces seen on the show and not the bullies with badges who routinely wind up in viral videos.  Abrams recalled the brouhaha over cameras first being brought into courtrooms.  Many feared that lawyers would play to the cameras, but soon everyone forgets about them and gets down to business.

"I found that to be the case in every high profile case I covered," he recalled.  "They forgot [about the camera] or it became a very minimal issue.  Do I think that the officers we follow are some of the best the departments have?  I do.  The departments are picking the officers.  I don't think the cameras are changing what they do, and if they are changing them I would assume it would be for the better."

Telling a story as it unfolds has built-in challenges.  Anyone who has ever sat on a stakeout, for instance, knows it can be beyond tedious.  Police are often waiting or are driving around.  It's those moments that make time feel as if it's standing still, which doesn't necessarily make for great TV. However, in each episode Live PD has six different forces from which to choose.  When the quiet is shattered it's often by the adrenalin-spiked drama of a crime.

Abrams acknowledged that's when the show needs a time delay, which varies depending on the situation. Live PD must be responsible and when the police being followed stop someone, and personal information is given, there's a slight delay.  When a situation is more serious, the delay is sometimes longer.

In the age of audience participation, Live PD'sfans are wholly engaged.  Social media peaks during the show, and eagle-eyed viewers have helped police.  While officers are in the heat of an arrest, they may not see things the home viewer can, such as a suspect tossing a bag of drugs out of a moving car.  "They are proud to be associated with the officers involved and with the show," Abrams said of Live PD's viewers.

Though he's not surprised by the show's reception, Abrams is happily surprised by how big of a hit it is.  Live PD represents the sort of program now rare for non-sports events.  "If you look at the repeat that plays right before, and it does well, the minute the live show starts you see a huge bump," Abrams said.  "That means people are not flipping by.  It is appointment television, which is very hard to get these days."

The sentiment was underscored by Peter Olsen, Executive Vice President of Ad Sales for A+E Networks.  "We're very proud of this trailblazing show and the way our audiences have embraced it," he said.  "It's a great example of A&E's commitment to providing authentic, quality programming for our fans and our advertisers.  We couldn't be more thrilled with LivePD's recent Critics Choice Award nomination for Best Unstructured Reality Series."