AGENCY DEI: A Not-So-Secret Weapon in the War for Talent 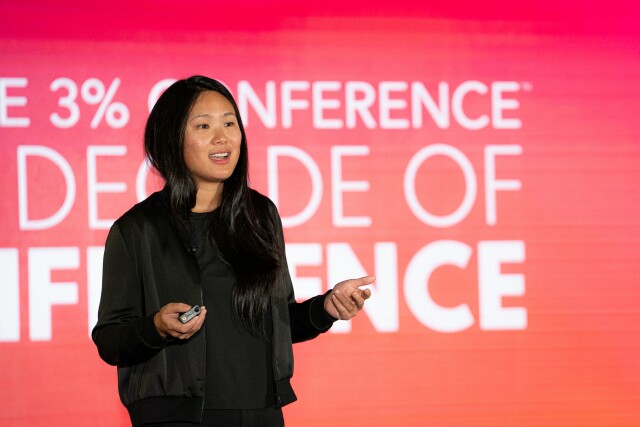 The 3% Movement recently marked its tenth anniversary advocating for more women in advertising leadership roles by hosting a hybrid conference in Atlanta entitled A Decade of Difference. As their website notes, "By our very name, 3% is an organization based on metrics and bent on improvement. We believe that you are what you measure." I couldn't agree more. Pam Yang (pictured at top), an executive coach who co-founded AGENCY DEI with industry vets Amanda Wu and Jo Hayes, presented their workforce diversity tracker at the conference. To help spread the word about this important DEI tool, I cut together a two-minute video summary of her presentation on the Adland's diversity progression (not pipeline) problem, followed by some of my own thoughts, below.

What AGENCY DEI has done is remarkable and unprecedented in the advertising industry. While there have been previous surveys or even content analyses of diversity, they have generally compiled their data in the aggregate in order to find "a villainy with no villains" -- a phrase I borrow from Marc Bendick, author of what still remains the most comprehensive study of diversity in advertising.

The 4A's repeated this mistake in 2020 when they blunted 600 & Rising's call for a diversity survey that would have held individual agencies publicly accountable for their numbers by instead conducting a more superficial survey that protected bad actors by keeping participants anonymous, dumping all the data into two categories (independent vs holding company agencies), and declaring the report "confidential" and thus "not to be shared with third parties."

The contrast could not be more stark. AGENCY DEI provides an open-access one-stop-shop where conscientious clients and discerning talent can go to see how individual agencies stack up against each other in terms of how they're hiring, promoting and retaining diverse talent. The 4A's told us what we already knew: advertising, as an industry, is too white and male from the middle to the top and all the way down to its creative core. We don't need another survey to tell us that. Besides, any need for a baseline was already established when all the major holding companies released their numbers last summer.

What we do need is more agency-level data that will separate the villains from the heroes and penalize/reward them accordingly. In other words, we need accountability, transparency and a centralized and standardized mechanism for documenting and measuring actual outcomes that makes the data easily and freely available to the only agents capable of getting advertising agencies to change: current and prospective clients, employees and investors. And that's what makes AGENCY DEI's accomplishment so historic.

In the midst of the "great resignation," job candidates are starting to ask more of their potential employers and, in my view, AGENCY DEI just might be the perfect tool for the times. As Pam Yang put it on stage at the 3% Conference:

"We wanted to make sure that [talent] had information about the environments in which they were potentially entering, that they could make a more informed decision about where they were going to invest the majority of their waking hours and their creative energy."

In 2020, millions of people took to the streets to protest police brutality against Black bodies -- a legacy of oppression harkening all the way back to the slave patrols of the early 1700s. Activists decried how police unions have long protected abusers and demanded the repeal of qualified immunity, a judicial doctrine that shields officers from liability even when they break the law. And in 2021, millions more, many having worked successfully from home during the pandemic, resisted or even outright refused to come back to workplaces which had never been safe for them in the first place. For instance, many women of color reported remote work as a welcome relief from chronic microagressions and bias.

With activists and workers alike raising expectations for our public and private institutions, agencies may face a distinct challenge in 2022 as they try to recruit and retain talent. It might not be enough to simply say "Black Lives Matter" or even raise wages or allow more flexible working conditions to better compete with rival firms and adjacent industries. With a labor shortage shifting power away from employers and towards employees, job interviews will become more two-sided. Candidates who are aware of advertising's racist past and present and want to be part of the solution can do so by asking one simple question: "So, have you shared your diversity data with AGENCY DEI?" It's a quick and easy way to test an agency's values and their answer will speak volumes.