"AHS: 1984" Is a Corny, Campy Throwback to Slasher Flicks 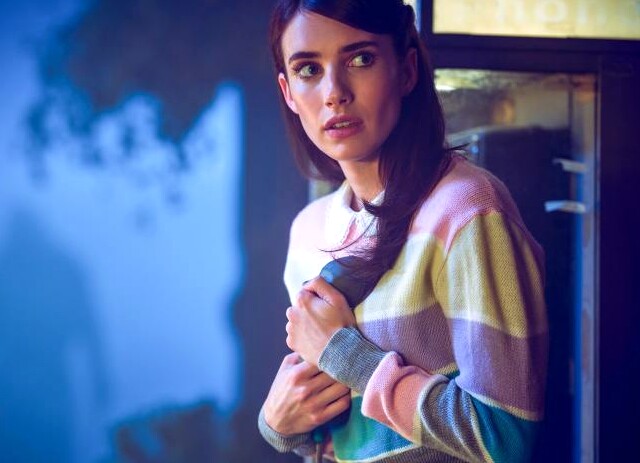 When: Summer, 1984.  Where: Camp Redwood, a remote, pleasant getaway, albeit one with a twisted history.  Who: the doe-eyed sweetheart, the sex-crazed bad girl, the spoiled pretty boy, the handsome jock, the tries-too-hard nice guy, a religious zealot with a hidden past and more than one mindlessly murderous maniac.  The Plot: a group of camp counselors escaping the L.A. heat are outrunning their pasts and a pair of knife-wielding maniacs?  Is this a reboot of Friday the 13th?  Some low-budget, direct-to-video C-movie?  Nope!  It’s AHS: 1984, the ninth season of FX’s hit anthology series American Horror Story; also the first since AHS: Apocalypse, which turned the franchise inside out and then put it (mostly) back together again.

The Ryan Murphy-Brad Falchuk-created series has become known for taking what we know about horror and turning it on its head, completely redefining the genre through layered storytelling, well-developed characters and stellar performances from knock-out casts that have included many beloved veteran actresses, including Jessica Lange and Kathy Bates.  This season sees the return of AHS veterans Emma Roberts, Billie Lourd, Leslie Grossman, Cody Fern and John Carroll Lynch (season four’s Twisty the Clown, who really should make an appearance and connect 1984 to the overall AHS megastory), as well as a number of fresh faces new to the ever-growing Murphy-Falchuk stable of talent.

What I particularly love about this season is how closely it follows the formula that created those iconic slasher films in 1980s Hollywood.  Set the story in an otherwise harmless place such as a summer camp, the quiet suburbs or even a Christmas party.  Add a few standard stereotypes such as a sweet ingénue and her overly confident boyfriend, a rebel, a stoner, a nerd, a goth, a know-it-all, a spoiled rich kid and a red herring suspect or two.  The villain is generally either an escaped lunatic, a bloodthirsty zealot or a psychopath out for revenge; bonus points if the monster is somehow related to the sole survivor.   Sometimes the monsters are seemingly immortal like Jason Voorhees or Michael Meyers.  The formula has worked time and time again and it sure as hell is working right now on AHS.

Roberts is the standout as Brooke, described as “America’s last virgin” by one of her friends.  Brooke nearly becomes the latest victim of the infamous Night Stalker, a serial killer who is terrorizing L.A. and who vows he will find her again and finish the job.  Roberts’ characters in 1984 and Murphy’s gone-too-soon series Scream Queens are polar opposites, giving her the chance to show her incredible range.  She’s a bright-eyed ingénue this season, but we’ve seen her as the cold-hearted diva Madison Montgomery who says “Surprise, bitch” at least once in every episode of AHS: Coven and Apocalypse.

We learn that prior to meeting Billie Lourd’s Montana and company, Brooke’s happily-ever-after marriage to the man of her dreams took a turn for the worse and left her convinced that she will never again be happy.  Roberts’ portrayal of Brooke reminds me of such iconic cinematic scream queens as Jamie Lee Curtis and Neve Campbell.  (Roberts co-starred with Campbell in Scream 4.)

Cody Fern, one of my favorite newer additions to the AHS repertory company, returns after his memorably creepy portrayal of the antichrist Michael Langdon in Apocalypse.  Now he’s the annoyingly handsome Xavier, a “real actor” as he dubs himself in the season’s first episode.  His portrayal of Langdon last season showed his incredible range, from the character’s sinister tone and regality to his meek, boyish behavior in flashback scenes.  Xavier, however, is loaded to the teeth with charm and confidence, bordering on cockiness, and has a secret, recent past that he would like to keep buried.  We learn what that is (no spoilers) and how he, like Brooke, is using his summer at Camp Redwood to escape from it.  Out of the frying pan …

Leslie Grossman, known for her larger-than-life and sarcastic characters in past seasons, plays the (at time, too) religious owner of Camp Redwood, Margaret Booth, who was attacked during the slaughter in 1970 of that summer’s camp counselors at the hands of Mr. Jingles, but miraculously survived.  She claims she had an out of body experience and that it was Jesus that kept her safe while Jingles went on his rampage.  I have some theories of my own about what actually happened that night, but I’ll keep those under wraps in case any of them turn out to be true.

Regardless of my conspiracy theories, Grossman plays the strong-willed overcomer to great effect in what is easily her best AHS portrayal to date.  Her tough-as-nails and Reverend Mother-like demeanor is so vastly different from what she has portrayed in past seasons, perhaps because she has been given a lot of room to play with the character, particularly in the season’s second episode when she comes face-to-face with the Night Stalker, played to sinister perfection by Zach Villa.

AHS: 1984 is so corny and campy (pun intended) in the best ways possible, you’d think you were at this year’s Met Gala.  But that’s how horror movies rolled during the ‘80s, when Jason and Freddy and Michael ruled at the box-office.  As strange as it sounds, given all the carnage on screen, 1984 has brought something new to the AHS franchise:  nostalgic fun.  The ‘80s ran the gamut from the rise of cable TV to the demise of drive-ins to the soaring popularity of VHS rentals.  Cheesy horror was a staple in the success of all three, and even now it doesn’t disappoint.