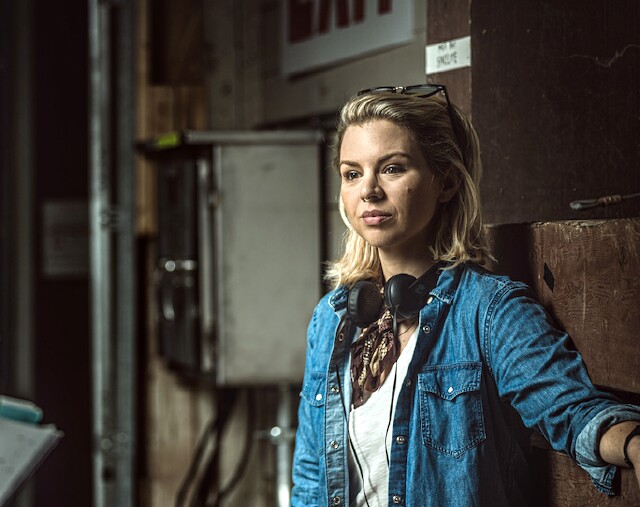 Ali Liebert has over 85 acting credits on her impressive resume, including many movies on Lifetime and Hallmark Channel, but this weekend we will see something new from her with the premiere on Lifetime Movie Network of Amish Abduction, which marks her network directorial debut.  “Truthfully, I've been thinking about how to start my directing career for years now,” she told MediaVillage in an exclusive interview.  “I've been shadowing other directors on set for a while, but with my acting schedule being what it is, it just never seemed to work out.  Last year brought the perfect storm of opportunity, and things lined up, and I was so excited to start.  Amish Abduction has a very special place in my heart and always will because [as a director] it is my first [movie of the week].

“It is a little like your first love, that one you never forget,” Liebert (pictured at top) continued.  “After acting in quite a few Lifetime and Hallmark movies, I think understanding how these stories are constructed was really important.  But the exciting thing for me about directing was getting to work with the cinematographer and exploring the technical aspects of filmmaking.  I was also blessed with a fantastic cast.  Having taught acting for many years, and having worked as a casting assistant, working with the actors felt natural.  Sure, the technical part both excited and terrified me, but the whole thing was so rewarding, and the incredible crew made the whole thing far less intimidating than I expected.”

Amish Abduction centers on the story of Annie (Sara Canning, pictured below), a young Amish mother whose life is turned upside-down when her husband Jacob (Steve Byers), already questioning his Amish faith and way of life, absconds for a life with the “English” (everyday Americans) taking their young son Caleb (Liam Hughes) with him.  As if Jacob’s abusive behavior and the kidnapping of the child weren’t enough, Annie is soon served custody papers, forcing her into an outside world she knows little about as she attempts to fight Jacob. 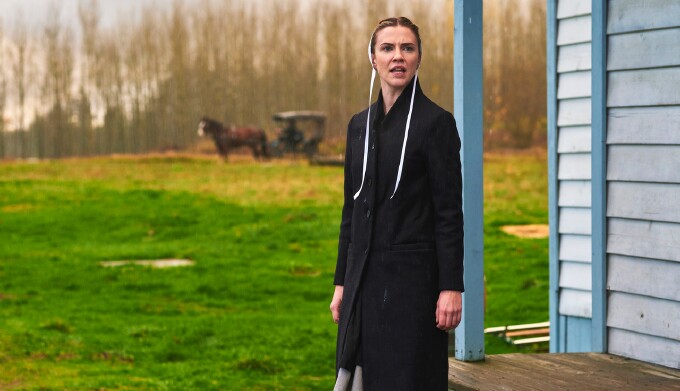 The movie is a departure from the usual Lifetime woman-in-peril story, and while still touching on that theme, its cinematic delivery (courtesy of cinematographer Jan Klompie) coupled with Liebert’s keen directorial eye (she’s a natural) will have viewers immersed in a world with which many will be unfamiliar.  “I did a lot of research on the Amish community, and given the amount of television surrounding it, it's something people are interested in,” Liebert explained.  “Our goal was to make it as real as possible.

“The themes of this piece really interested me,” she added.  “The question of beliefs, abusive husbands and the empowerment of women are all combined.  I connected to the Annie character, and I hope the audience does, too.  I hope the audience will relate to the strength that she builds throughout the movie because it's fantastic, and Sarah did an incredible job, as did Steve.  I felt blessed to have so many talented actors, who are friends, that would agree to do my first movie with me.”

Liebert compared the experience of directing to motherhood, joking, “It's like you've made a film baby, and you're the new mom!  I callAmish Abduction my first child and now I'm dropping my child at daycare with the premiere.”  "But when plunging into the director’s chair, I had to know the difference between wanting to [do something] and [being] ready."

“A production company I’m a part of called Sociable Films produced a film called Afterparty (2013) that I appeared in,” she recalled.  “Being involved in that ‘grassroots’ project and seeing how calm our director Michelle Ouellet was in handling things, it started to get into my head that I wanted to direct, too.  Through some on-set coaching opportunities like shadowing legendary Canadian director Ann Wheeler, I was just so inspired by so many great women.

“I directed a short film last summer, so when this opportunity was presented, I truly wasn't sure if I was ready,” she continued.  “But a producer on Amish, Gilles LaPlante, who I knew from Hallmark’s Cooking with Love, which I also produced, really believed in me.  A part of me thought maybe I wasn't ready, but all these people believed in me, so ready or not, I did it anyway.  It turned out to be the most rewarding experience.”

Since completing Amish Abduction, Liebert has directed another film, and will soon be seen on screen in two Christmas movies -- Lifetime’s Storybook Christmas (December 6) and Hallmark’s Cherished Memories: A Gift to Remember 2 (November 24).  “I'm trying to switch acting and directing caps stealthily,” she laughed in closing.  “Acting is in my DNA.  It's like that line in Brokeback Mountain:  "I can't quit you!"

Amish Abductionwill be telecast Saturday, November 9 at 8 p.m. on LMN.