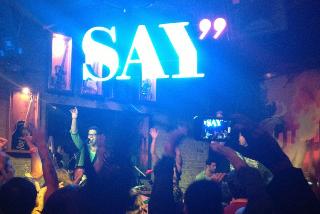 "This is the apotheosis of the penetration of technology into everything."
-The New York Times' Bill Keller on SXSW 2013

If you went to SXSW twenty years ago you would have been there to see and discover new music. You worked at a label or publishing company, or perhaps you were a journalist or PR rep. Sure, there were locals and college kids swaying next to you at the shows, but in the end SXSW was an industry event where bands were discovered, signed and given a chance to break out. There were no cell phones. There was no social media.

Buzz was entirely old school word of mouth. There was no Pitchfork or BrooklynVegan or Hype Machine. There weren't countless photos and tweets flooding the universe with directional information. There weren't massive compounds across the freeway like those from Fader or Spotify, mostly just the venues up and down 6th street and a few other streets. There was no aggregated crowd wisdom. You had to stand in front of a band and use your eyes and ears to have a sense for whether the band was happening. You'd have to look around the room and read the faces of the fans in the audience to see what kind of reaction the music elicited. Yup, the old fashioned way, when tastemaking wasn't crowd-sourced, but a skill you either learned or inherited.

Although the first films showed up at SXSW in 1994, the film fest picked up steam a decade ago, and is now a steady and lower decibel buzz that extends for the duration of the festival. And although I am a film nut, I rarely have the time to see many films. I did see the star-studded slacker romance Drinking Buddies which seemed a near perfect choice to play in Austin. The films are appropriately and largely American indies or documentaries focused on young hipster types, or iconic American documentary subjects. The lines are long for most buzzy screenings, but unlike Sundance or Toronto or Cannes, SXSW isn't a buyer's festival, more a low-key event for film fans and a fun place to premiere a film.

But in the end, as much as technology has democratized so much of our lives, it has also eaten SXSW. What began as a music conference/festival has become a carnival of hype and ambient noise. Tech companies large and small slog it out on the streets of Austin trying break out or expand their lead. There are panels throughout the week that very few people seem to attend, and parties that almost nobody seems to be able to get into. There is free shit everywhere. GroupMe still buys grilled cheese for people with the app on their phone. Other companies ply attendees with food, booze, energy drinks, stickers, t-shirts, free pedi cabs, and music. It is an endless sea of noise and rolls out like this for the uninitiated.

SXSW is an exaggerated ground zero for understanding the intersection of technology, youth culture, and the evolution of media.

On Friday, the techies invade Austin. The locals vacate the city and rent every available room in the city on Airbnb at increasingly egregious prices. Literally thousands of companies compete for press on the blogosphere, with the hopes of becoming the next big thing (although it has been quite a few years since Twitter and Foursquare broke out and they didn't really launch at SXSW). And those companies that have already broken out, throw increasingly outrageous parties, fighting hard to seduce an A-List crowd. It's a big hipster schmooze filled with old guys trying to stay relevant and young guys dreaming of becoming rich old guys that somehow managed to stay relevant. There are VC's, brand marketers, PR folks, engineers, biz dev guys, legit celebs, and Internet celebs dining at food carts and sampling $20 club sandwiches at the Four Seasons.

This lasts until Tuesday or Wednesday when the nerds leave and the real hipsters and music tech nerds arrive to do essentially the same thing but with endless amounts of epic live music, prioritized wait lists, and endless venture funded boondoggling. Great bands play everywhere from Stubbs to a tiny stage in a restaurant. This year bands on a meteoric rise like Alt-J,Lord Huron,The Joy Formidable, St. Lucia, Foxygen and others played ten times over a week, and often three times a day. But this is a different SXSW. Everywhere there are phones in the air capturing photos, video, tweeting, checking in, texting. In the air there is a sea of Vine, Twitter, FourSquare, Facebook, Path, Snapchat, and a bunch of other smaller apps like TastemakerX,Soundtracking, Songkickfocused on music.

But when the dust settles, there is no more vibrant a microcosm for observing the modern age than SXSW. Culture, technology, food, film, art all displayed at a hyperbolic scale. Music and film have been massively disintermediated by technology, and in a sense music and film now compete with social media, social games, and the internet broadly for time. But in the same breathe, technology has now enabled musicians and filmmakers to create and distribute their art to global audience, at a significantly lower cost and with very little friction.

SXSW used to be about music, now it seems to be about everything and nothing at all. Like the occasional trip to Vegas the first 48 hours and great, and at 48 hour and one minute, you feel like you need to leave immediately. And like the indie bands you used to love until they got too big and commercial and you lost interest, SXSW is all grown up. It's not the DIY mecca it used to be, but then again occasionally there is that band that grows up and still remains relevant and cool, and in that way perhaps SXSW is kind of like Radiohead.

Marc Ruxin is CEO and co-founder of TastemakerX .