Alvin, Simon and Theodore are Coming Back 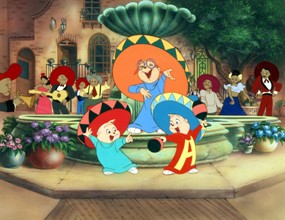 You say those three names and everyone knows who you're talking about, because everyone grew up with Alvin and the Chipmunks.

From the moment I began my interview with Ross Bagdasarian and Janice Karman, the "owners" of Alvin and the Chipmunks, it was hard to contain my excitement. Ross, who voices David Seville, sounded just like him in normal conversation. It was like I had been transported into a world that all kids dream of - talking to a cartoon character. And when Ross yelled "Alllllllvin" in true David Seville fashion, I got the chills.

Ross' father, Ross Bagdasarian Sr., created Alvin and the Chipmunks. Ross Sr. was a songwriter and at the time was in between hit songs. "He had to do pretty much anything he could to put food on the table for the family," Ross said. In 1958 Ross Sr. had $200 to his name. Being a gambler ("I don't mean off to the race tracks or Las Vegas. His motto was 'go big or go home,'" said Ross), Ross Sr. purchased a tape recorder for $190. "It was such a gutsy thing to do. He had three children, a wife, and a mortgage, and you don't know how you're going to pay to get a piece of bread on the table and you buy a state of the art tape recorder," Ross said. Luckily for the Bagdasarian family, it was the type of tape recorder that allowed a person to change tape speeds, and with it, Ross Sr. wrote the song "Witch Doctor." His record company, Liberty Records, was about to go under and Ross Sr. convinced them if the song flopped, nothing would happen. But if it was a success, well, they'd go back in business. Of course, we all know that song today because it immediately was a hit.

A few months later Liberty Records told Ross Sr. that even though the record sold millions, it would only last them for a certain amount of time, so they asked him to come up with another big novelty hit. Ross said, "He loved the sped up voice of the witch doctor and he wanted to marry that up with more personality, more of a character driven situation... He didn't know if he wanted to use a reindeer, elephant, rhinoceros, or what. As he was driving his car through Yosemite National Park, he was trying to think of what kind of animal or insect would be right for that song. Then a little tiny chipmunk darted out into the road in front of my dad's car. It basically dared him to drive past. My dad just loved that kind of audacity, that kind of spunk. That became Alvin. Alvin always had that sort of small man complex... He would not bow down to the authority figure like David Seville. Even though he came up to his ankle, he'd stand up to him."

In addition to Alvin, as we all know, are Theodore and Simon. The chipmunks were named after three record executives at Liberty Records: Al Bennett, Si Waronker and Theodore "Ted" Keep. Then, of course, is David Seville, named after the city in Spain where Ross Sr. had been stationed during World War II.

"My dad passed away really really suddenly of an immediate heart attack... As a 22-year-old who just graduated from college, I revered my dad... I was so thrilled we had a mole on the same place on our foot. Any way I could identify with my dad I was thrilled... When he passed away, for me, one of the ways to immediately be surrounded by him and to fill that absence was to inundate myself with all the music he had done and the TV shows. It became the natural thing for me to want to bring Alvin and the Chipmunks back. It was a way of having my dad still around me," Ross said.

Ross and his wife Janice took over the business. Besides the fact that Ross voices David, Alvin and Simon, and Janice voices Theodore and the Chipettes, the couple, who finish each other's sentences, have a love for these chipmunks that is extraordinarily apparent. "When we first started, Theodore became much more flushed out in the shows and Alvin was always the star. The fan mail started to reflect our writing. Alvin and Theodore were starting to get a lot of fan mail and Simon wasn't. I felt like a parent who was neglecting the middle child. I said to Ross that we have to write more for Simon, and as we did, the fan mail started to reflect that," Janice said.

Janice didn't grow up with Alvin and the Chipmunks like Ross did, but they were still on her television screen. "My mother wasn't real big on us watching TV. I remember watching Alvin and the Chipmunks and looking at her wondering if I could watch it, and she said, 'Yes you can watch it. That's a smart show,'" Janice said. "I loved what his father had created... One of the things Ross and I were always conscious of was maintaining what his father had done. We really didn't want to destroy this great show so we were always looking toward the heavens saying, 'We're trying!' hoping we had his father's approval. This is a real honor and a true responsibility."

And now, thanks to Janice, we have the Chipettes: Brittany, Jeanette and Eleanor. "Ross and I had been doing the albums at that point... We couldn't do the girl songs. I wanted to do female chipmunks that have counter personalities to the Chipmunks so we could do some girl tunes," Janice said. Ross added, "It enables you to deal with issues that girls are going through that boys wouldn't necessarily be dealing with... We had a baby girl at the time. We wanted to let her know she can be president, or a soccer champion, or whatever... With the Chipettes we can handle those sorts of things."

So now there's Alvin, Simon, Theodore, Brittany, Jeanette and Eleanor. What's next? "One thing we're really thrilled about is the new pre-school show. Janice has created a show that uses the chipmunks as preschoolers in a very unusual look. They're now designed as puppets. It's a really good looking puppet. When she first mentioned the idea I was really frightened about it. After she was able to revive me, I thought well let's take a look at it. The first pass they looked like road kill. Shortly there after, they looked phenomenal," Ross said.

"It's a great show about values," said Janice. "The situations are ones that preschoolers deal with every day. I really wanted to address that and the emotional journeys they go through... in a hopefully fun and entertaining and musical way." Ross added, "Kids identify with the Chipmunks. When they have characters they identify with, they mimic their behavior."

Ross and Janice both said it was important that even though the pre-school chipmunks are puppets, they had to retain the essence of the original Chipmunks. So, then, what happens now that Ross and Janice have embarked on the journey to create a live action Alvin and the Chipmunks movie for 2008?

The other day, Ross and Janice gave the final approval for the look of the chipmunks, which they called a journey. "We needed them to be recognizable and have the essence of the characters. It's been a challenge." So what will the Chipmunks look like? "More like real chipmunks," Ross said.

"That's really the trick. What you want to do is create a design that works and is believable in the live action world... They also have to have the essence of Alvin, Simon and Theodore, and I think we struck a real wonderful balance," Ross said.

As for David, Ross and Janice couldn't say who they have in mind for the part, but they said if you think of A-list actors, you'll be on the same list as them. And, he doesn't necessarily need to look like David either. "When you look at a person, even though you wouldn't normally have thought of him as Dave, somehow he starts transforming when you want him badly enough. He starts taking on all these Dave characteristics... It's a wider range than you'd initially be thinking," said Janice.

To find out more about Alvin and the Chipmunks and their DVDs that are currently out, you can go to their website at www.thechipmunks.com.

Jacki Garfinkel is Managing Editor of www.JackMyers.com. Always a fan of television, even in kindergarten Ms. Garfinkel knew to choose the afternoon session so she could watch The Price is Right and all the classic cartoons in the morning. &…