Amazon Gets Custody of “Please Tell Me I'm Adopted!” 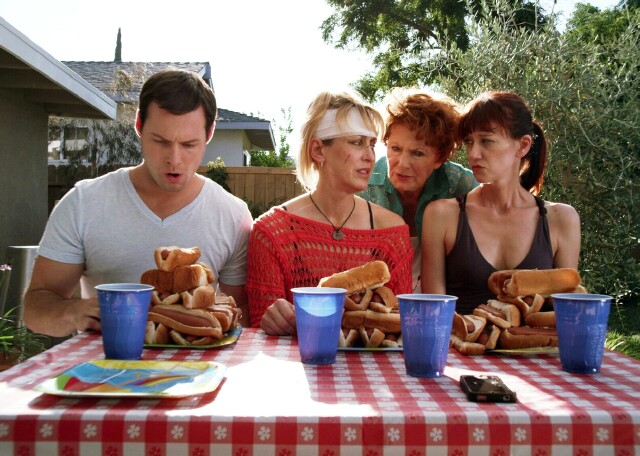 The cast and crew of Amazon’s new short-form comedy Please Tell Me I’m Adopted! gathered last week at Hollywood’s swanky eatery Estrella for a screening of the series and to celebrate their three year labor of love.  The series, which debuts March 6 on Amazon Prime, represents the streaming service’s latest foray into short-form original programming.

For all involved the night was indeed a triumph. Through an Indiegogo campaign and a committed crew, Adopted grew to eight, eight-minute episodes. It chronicles the misadventures of free-spirited Tiffany (played by series creator Nicole Michele Sobchack) who, after losing her boyfriend, job and home all in one day, moves with her recently married sister Emma (Andie Karvelis) and brother-in-law Bob. It’s soon apparent three definitely is a crowd when Tiffany begins bringing home a cavalcade of characters the newlyweds would prefer to keep at arm’s length.

“The story of the show is pretty incredible,” star Ben Kacsandi, who plays Bob, told me at the party. “We were going through the Second City Improv Program, where this was originally a stage sketch. For whatever reason it was cut it from the show but Nicole loved the concept of it.”

“I pulled it from the show because we just couldn’t execute it properly,” Nicole explained.  “Ben was a part of the original sketch, so I asked if he’d do a one-off YouTube video. We had a meeting with Andie and the others, got it all together and that was it.

“But I woke up the next morning saying, ‘Oh my God, this is a series,’” she added with a laugh.  “It’s about a girl trying to find herself. My husband Chris, our executive producer, woke up and said, ‘How much is this going to cost me?’ I knew then he’d be one heck of a producer and so it began.”

The series, produced by Wraptastic Productions, also comes with a genuine Hollywood pedigree: Legendary TV producer Garry Marshall was huge supporter of the series before his passing last July, having served as a mentor to the production.

As it happens Marion Ross, who played Mrs. Cunningham in Marshall’s classic sitcom Happy Days, appears in an episode as Tiffany and Emma's mother.

“That was a dream come true,” Nicole beamed. “Our casting director Lisa London and producer Heather Hall thought Marion would be perfect for it. The part was rewritten from a dad to a mom and one of our producers had worked with Garry Marshall, so there was a connection. Marion read the script and loved it. I thought she’d never do it. When we got the call saying she was in I think I did the happy dance for about 25 minutes.” (Nicole is pictured at top, second from left, with Ben Kacsandi, Marion Ross and Andie Karvelis. The full cast and crew is pictured below at Estrella.) 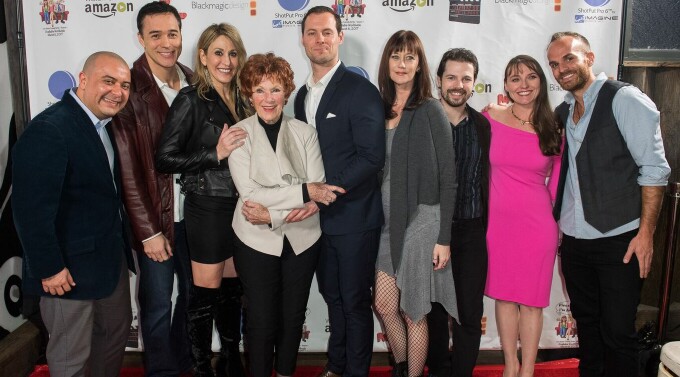 Adopted also had the support of Cheryl Marshall (no relation to Garry) of AMPAS (Academy of Motion Picture Arts and Sciences). “I told Nicole that she and Ben were like Lucy and Ricky Ricardo,” Cheryl shared with me at the event. “She showed me some of it and I thought it was hysterical.

“It’s the kind of stuff you flip around on your TV looking for but it’s not there,” she continued. “Sometimes I just want to come home, pour a glass of wine and laugh and you don’t find that on TV right now. It doesn’t get too heavy or deep. It’s just fun.”

“One of the most beautiful tributes we had to the writing was having Marion Ross come on board,” series producer (and Nicole's husband) Chris Sobchack recalled. “Having her read it, love it and want to be a part of our little show that could, was a dream come true, especially given there was nothing in the checkbook. But she said, ‘I don’t care what they offer, I want to do this.’ She likes to play against her Happy Days character, so she was game for anything.” (Fun fact: Chris' "day job" is working as Elton John's drum technician, a position he has held for 17 years.)

Given the short form idea is still a relatively new concept, it’s anyone’s guess at this point if it will catch on. However, all involved in the project are grateful that the series will get to be seen.

“The idea of streaming content in general was unheard of a couple of years ago,” Chris said. “But it caught on with the big players that got involved. [Short form] is something the big players haven’t done yet, so we’re incredibly grateful that Amazon was interested and took a chance on us.”