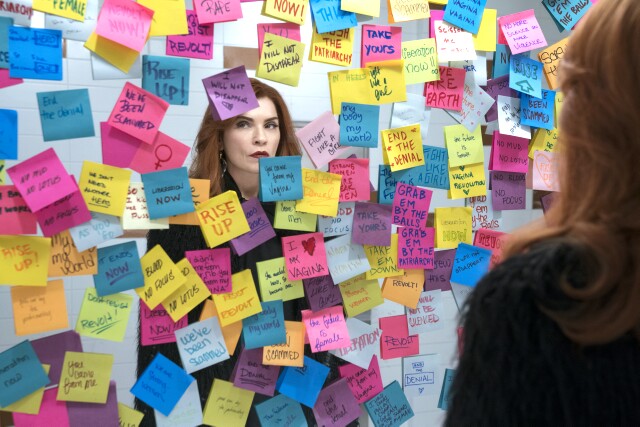 In this platinum age of television industry experts struggle with how to categorize shows.  Is a program automatically a comedy because it is a half hour, a drama when it logs in at an hour? What about programs that defy labels?  AMC’s Dietland is one of those series.  Refusing to be pigeonholed is precisely what the show is about.  There’s fantasy, darkness and animation, an admittedly strange mix, but in executive producer Marti Noxon’s extraordinarily capable hands it comes together.  A welcome antidote to regressive nonsense like The Bachelor, it’s logical to think of Dietland as a result of the #MeToo era.  Yet, Noxon optioned Sarai Walker’s novel before the movement ignited.

Noxon, also the executive producer of Girlfriends Guide to Divorce, UnReal, Buffy the Vampire Slayer and the upcoming Sharp Objects, doesn’t mince words.  This show is angry -- furious, really -- which some critics have questioned.  But if anyone still wonders why women are enraged, well, at this point all I can say is good for you for coming out of that coma.  Granted, anger is tough to deal with, and Dietland is not a show that will win awards for subtlety, but it will be a rare woman who does not relate on some level.

Just that Kitty (Julianna Marguiles, pictured at top) can be perceived as a raving witch for being ruthless in business is reason for ire.  Imperious, brilliant and uncompromising, if Kitty were a male boss she would be ruling the world.  As it is, she reigns over her corner of it, as creative content editor of a magazine empire and editor-in-chief of Daisy Chain, a magazine for young women.  Aggressively glamorous, insatiably hungry and a compulsive devotee of the beauty industry, Kitty not only promotes products via ads and articles in her magazines, she uses the best of them.  Though Margulies is the marquee name Kitty is not the series’ central character.  Plum Kettle (Joy Nash, pictured below right), her ghostwriter, is the focal point. 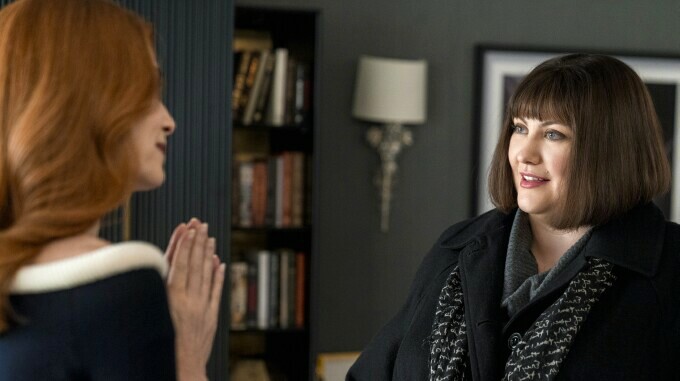 Plum pens the magazine’s popular advice column and whatever else falls under Kitty’s byline. Smart and compassionate, she is also morbidly obese, loathes her body and is saving toward bariatric surgery, even as her mom (Debra Monk) tries to get her to accept herself as she is. Plum’s size makes her an easy target, but Noxon unflinchingly depicts how all women regardless of body type are constantly harassed -- on the street, in the media and by one another.

As the women on the canvas put up with these indignities, a secret militia is killing men, tossing their bodies from highway overpasses, injecting them with lethal substances, igniting them on fire and dumping them from planes.  The band of assassins, known collectively as Jennifer, targets men who have abused women. Veterans, celebrated photographers, tabloid publishers – it does not matter who they were if they assaulted women or contributed to their dehumanization.  Their murders are carried out with MI6 precision.  Who is behind this well-tuned army of vengeance? A strange young woman, Leeta (Erin Darke), who lurks in the shadows and works at the magazine, is involved, but she’s too young to be the leader of such a well-financed operation.  Leeta reports to Julia (Tamara Tunie), who holds the keys to the castle -- at least at a women’s magazine. She runs the beauty closet, the vault where products (and secrets) are kept.

Projecting the healing empathic of a shaman, and the beauty knowledge of Helena Rubinstein and Elizabeth Arden combined, Julia is the brains of Jennifer.  Signs, though, point to Verena (Robin Weigert) as the cult leader.  She has the motivation and financing.  Verena’s mom had been the leader of a popular diet program, one of many Plum tried.  Seeking to repair the damage her mother wrought, Verena tells Plum, “I find women who have been discounted, abused, marginalized, which is most of us, and I help them form their vision for change.  Then I help them act on it.”

Her Manhattan townhouse, Calliope House, as in the muse of eloquence and poetry, is a refuge for scarred women.  Sana (Ami Sheth), who had half her face burned, is among them.  Here, again, the show challenges established concepts of beauty.  Kitty, exceptionally thin with never a strand of flaming red hair askew, is spectacularly glamorous.  Plum, with her light blue eyes and perfect face, is large and stunning.  And Sana?  Half of her face is lovely.  Does that render her only a burn victim or can others see her beauty?

Verena offers Plum $20,000, which covers the surgery she desperately wants.  First, though, Plum must wean herself from anti-depressants and endure beauty regiments from the painful (waxing and injections) to the superficial (hair and makeup sessions).  One of Verena’s acolytes, Marlowe (Alanna Ubach), shepherds Plum through these passages.  Marlowe, a former sitcom star, talks about “bangability” and how all that ever matters in Hollywood is that the men in charge want to bed the women. 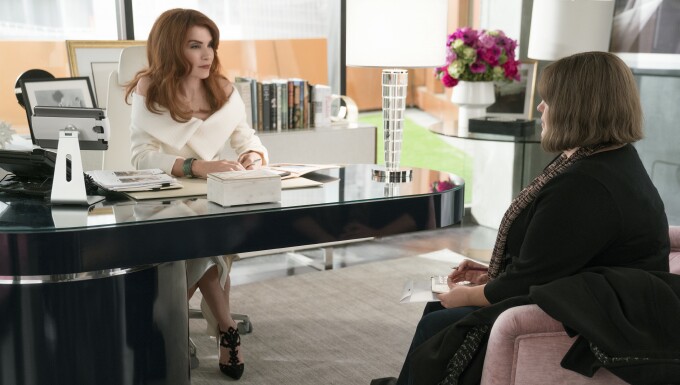 Factoids are dropped, including this stunner: The average woman spends an hour a day grooming herself.  Though the magazine is part of the beauty business, which Dietland refers to as “the dissatisfaction industrial complex,” it never says women should stop wearing makeup or coloring their hair.  Instead, like the original mantra of feminism, it tells them to do what is right -- for them.

Is Dietlandbombastic, enraged and surrealistic?  Yes.  Are men killed without due process? Absolutely.  Remember when guys were whacked on The Sopranos and no one questioned that? We watched because it took us inside a world we thought we knew but revealed more.  So does Dietland.  We’re on a deep dive inside the world of women who have put up with too much for too long.  Is it, at times, off-putting?  No more so than life, only far more entertaining.

Dietland is telecast Monday at 9 p.m. on AMC.