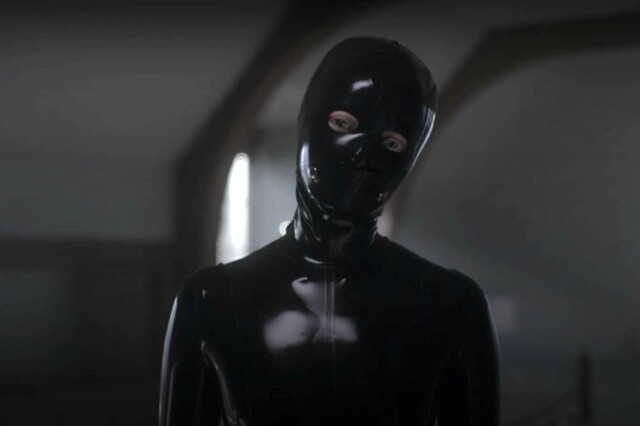 After nearly a decade of bringing late-night frights, Emmy-winning performances and plenty of commentary on the human psyche, society and politics, American Horror Story recently launched its very first spin-off: American Horror Stories, a new weekly anthology series that changes its cast and storylines episode-to-episode rather than season-to-season as AHS is known for doing. The series debuted at FX's content hub FX on Hulu with a two-episode arc that brought the story back to the infamous, vengeful ghost-infested Murder House -- the setting for season one of AHS and also prominently featured in seasons five (Hotel) and eight (Apocalypse).

The two-part premiere, titled Rubber(wo)Man Part I & II, feels at first like deja vu of AHS' first season, Murder House. It begins with a charming young family moving into a beautiful home in Los Angeles that will be instantly familiar to fans of this franchise (as will a couple of the ghosts therein, including the unforgettable Infantata). Dads Michael (Matt Bomer) and Troy (Gavin Creel) know of the murders that went down in the creepy Gothic home and plan to capitalize on it by turning it into a fully immersive, "haunted" bed & breakfast. As if. It doesn't take long for them to learn (the hard way) that the tales of its terrifying history were not exaggerated.

Trouble begins when teen daughter Scarlett (Sierra McCormick), a not-quite-goth girl, finds the iconic black rubber suit (from season one), feels compelled to put it on and then begins acting out of character (to put it mildly). That suit plays a key role is the violent revenge she takes against four toxic mean girls who bully and humiliate her online. Before long the house is once again a hot mess (in the worst way) and Michael and Troy's loving relationship is put to the test.

The central storyline, though, finds Scarlett falling for one of the house's many vengeful spirits, the butterfly knife-wielding, leather jacket-clad tough chick Ruby, played by scene-stealer Kaia Gerber (making her network television debut). As violent as it is, there is something sweet and touching about it, too.

The lure of the Rubber(wo)Man episodes is the return of characters and settings from season one. But as familiar as they are, the new characters and the cavalcade of shocks (mostly of the murderous kind) keep them feeling fresh.

Episode three, titled Drive-In, follows a young couple, played by Rhenzy Feliz (Marvel's Runaways) and Madison Bailey (The CW's Black Lightning) and their friends as they attend the screening of Rabbit Rabbit, a horror film so disturbing that it has been blamed for sending its viewers on a zombie-like rampage at its premiere in 1986, leading to six deaths. This is sure to be a reference to infamous, banned horror films like The Bunny Game and Cannibal Holocaust and incidents where people fainted and even vomited when The Exorcist hit theatres for the first time.

Compared to Rubber(wo)Man, Drive-In is much more of a standalone episode, and a memorable one at that, as it pays terrifying homage to classic horror films with societal commentary, especially Dawn of the Dead. There's even commentary from Rabbit Rabbit director Larry Bitterman, played by AHS veteran John Carroll Lynch, on how creatives are censored by studios, executives and government and aren't able to make a lasting impact with their art, which many would argue is true these days. In Larry's case, however, the world is a better place without his fearsome film.

What has always attracted me to the highly stylized AHS series, along with other horror hits like The Haunting of Hill House, is its exploration of personal themes beyond the scares. It's more than just episode after episode of jump scares and gratuitously gory deaths, though each season has had plenty of both. It's the delving into the characters, their complexities and their flaws that make them relatable human beings and keep them from being quickly forgotten victims of various killers and monsters. The original American Horror Story: Murder House dealt with the repercussions of a mother's trauma from a miscarriage and affair, a father's infidelity and a daughter's depression -- all while setting the tone for a newly revamped genre in television.

Drive-In's homage to the B-horror movies from the '80s that were enjoyed by millions at drive-in theaters on hot summer nights was expertly handled by director Eduardo Sanchez, perhaps best-known for his work behind the camera on The Blair Witch Project, working off a script penned by Manny Coto, whose filmography includes Dexter and American Horror Story: Apocalypse. The episode ends with a twist that quite literally made my jaw drop as one of Larry Bitterman's last lines rings true: "You think this is the end of the movie? This is only Act I!"

At the end of each episode, I'm continually intrigued, thinking "What the hell are they gonna do next week?" And the very open-ended climaxes of the two stories so far suggests to me that there may be one big episode later this season, perhaps the finale, that brings all the events together.