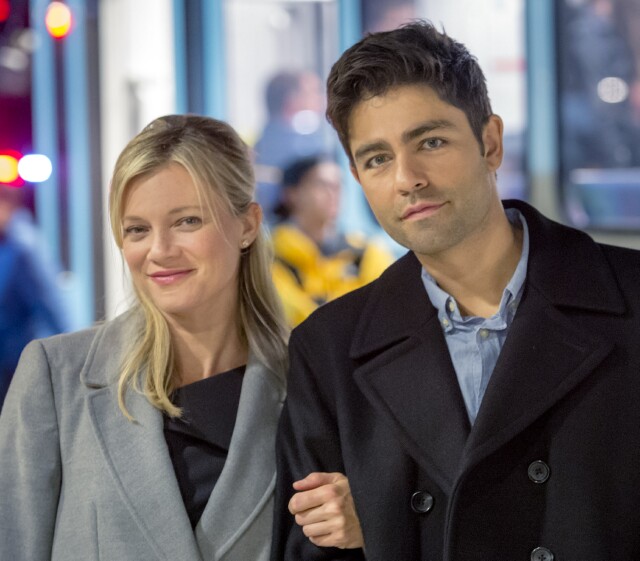 Actress Amy Smart knows her way around a romantic comedy. She’s been romanced by some of the best, including Ryan Reynolds in the 2005 feature film Just Friends.  Now, thanks to Hallmark, the ever-bubbly Smart can add Adrian Grenier (Entourage) to her list of fictional suitors with her debut project for the channel, Love at First Glance.

In the film (which anchors the channel’s popular Countdown to Valentine’s Day movie series) Smart (pictured at top with Grenier) stars as Mary Landers, a small town newspaper journalist assigned to write a piece on “The Meaning of Love.”  But with her actual love life in shambles, that proves challenging.  That all changes after Mary shares an innocent exchange with a handsome stranger (Grenier) on a train and he accidentally leaves his cell phone behind. She soon finds herself writing a whole new love story and rewriting her own story, as the two fall in love in the most contemporary of ways -- via a string of text messages.

It was the unconventionality of the story that hooked Smart from the start. “Honestly, I loved the script,” she recently told me.  “I thought it was just such a fun story about this girl who accidentally finds herself creating this whole other story through this guy and then falls in love.  I loved the different adventures she goes on and I loved the meaning behind it.

“What was also interesting to me is it’s not the normal way you get to know somebody,” she continued.  “There is that truth where people meet online, but because my character goes so many steps further to meet all these people in his life, all of whom validate what a great person he is, it gives her much more impetus to fall in love because she’s hearing nice things about him from all over.  I’m assuming if you meet someone online, you start thinking ‘who is this person?’ But if you talk to all of their friends first you might start to fall in love even more.”

As the latest addition to the ever-growing Hallmark family, Smart told me her first experience with the channel couldn’t have been better.  “I liked working with Hallmark,” she shared.  “This movie really does feel like it's accessible to everyone.  This is the kind of movie everyone can watch as a family.  You don't have to cover your kid’s ears or eyes; it's something you can just sit back and enjoy, take in the entertainment and meaning and emotions and just have a nice ride.”

Although having never personally succumbed to love at first glance, Smart is a believer.  “I honestly haven’t done it myself,” she admitted.  “For me, I feel that love kind of sneaks up on you. Like you might form a friendship, get to know someone and it just develops.  I definitely think there is such thing as lust at first sight, where you think, ‘I’m so attracted to this person and I feel the chemistry.’”

There is indeed chemistry between Smart and her co-star Grenier, despite the two sharing few actual scenes together onscreen.  “It's quite rare in this type of story,” she said of the romantic comedy.  “We did spend a little bit of time together when we were working and we had known each other peripherally for years as we have many mutual friends.  On location you do spend more time with the people you're working with and that's great because you are able to develop more chemistry and really get to know people better.  I think spending a little bit more time together was helpful for the scenes we actually had together.”

While her character’s journey of self-discovery sees her undergo a major adventure-seeking overhaul, Smart told me that while taking the occasional motorcycle ride isn’t out of the realm of possibility she’d be terrified to jump out of an airplane, like her character does. “That’s something probably not on my radar,” she laughed.  She has good reason for that.  Smart and her husband, HGTV star Carter Oosterhouse, welcomed baby Flora to the family fold this past New Year and the new mom is still getting a grip on that.

“I'm enjoying it,” she said of motherhood.  “I’ve seen my good friends and family have babies and watched the kids grow, but somehow doing it myself it feels like a whole new world.  Flora is only six weeks old but from when she was born to now, we’ve seen her grow.  It's really fun to see the little smiles come out.  I'm really still getting to know her; as much a she is my daughter were still bonding. It's new, fun, different and definitely hard at times, especially when she's gassy and crying and I can't do much.  But I'm only six weeks in and I barely feel like I can call myself a mom because it's so new.”

As for Oosterhouse, he’s doing just fine as a dad.  “Carter is doing better than I imagined, to be honest,” Smart laughed.  “I thought he'd make a good dad but I had no idea how this whole parenthood thing would start to form.  He's been so loving and so hands-on and helpful.  It really feels like we are partners in raising our daughter.”

With the movie’s Valentine’s Day premiere just around the corner, Smart told me it’s likely she and Oosterhouse will spend a quiet night at home in front of the TV. “I haven’t seen the finished film and Carter hasn't seen it at all,” she said.  “I’d really like to show him the film on Valentine's Day, so I think we'll just watch my movie, make some yummy food at home and hang out.”

For the immediate future, that’s exactly where Smart wants to stay -- although working with Hallmark again might change that.  “There’s definitely a possibility of doing more with the network,” she said.  “Somebody talked to me about another project they have in the works, so we’ll see.  Right now I've taken a few months off to really be a mom.  I definitely want to continue working, but feel a little more selective because my time feels really precious to be with my daughter.  Whatever would take me away has to really matter.  Adrian and I would definitely like to work together again, so that would be a good next project.”