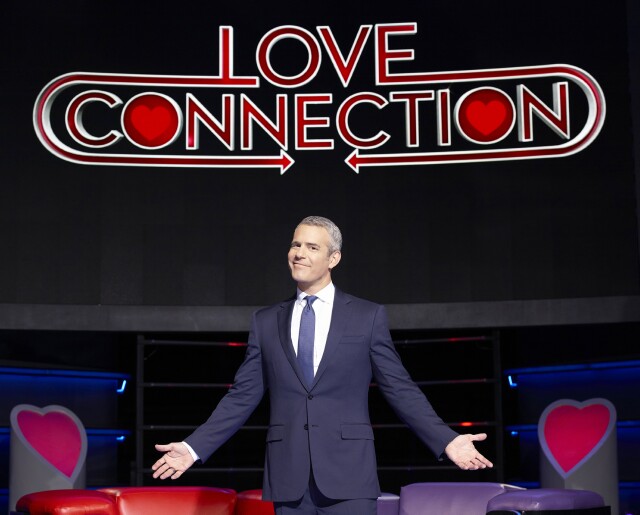 TV personality Andy Cohen may wear many caps, but the one he claims not to don in real life is that of a matchmaker.  Still, the host of Bravo’s hit talk show Watch What Happens Live admits he found a perfect match of sorts with his latest TV venture, a new version of Love Connection on Fox.  The show is a revival of the classic 1980s’ dating series hosted by Chuck Woolery that ran a staggering eleven years. The premise was simple -- one dater is paired with three potential suitors; after their dates they reunite on the show to dish about their respective rendezvous.  While Love Connection circa 2017 isn’t reinventing the format, according to host Cohen there will be some enhancements.

“We have a $10,000 twist at the end of the show,” he tells me.  “If the audience chooses somebody different than the person [doing the] dating chooses, they have to decide between a love connection or money and rejection.

“That’s kind of amazing,” he continued.  “They also go on way more dates this time. The person dates each of the potential three suitors and we have them score the date at the beginning, based on their first impression of each other’s looks.  The rest of it is a ‘he said, she said’ about dating.”

According to Cohen, landing the Love Connection hosting gig was a dream come true.  He grew up watching game shows (including the original Connection) and was a huge fan of original host Woolery ... though he admits there are few similarities between the two of them.

“I liked that Chuck was kind of calm and pretty relaxed,” he explains.  “I’m a little more excitable and I do love asking people personal and awkward questions.  I love the format, so it’s just the perfect marriage of a show for me.  I watched every game show as a kid and I love the genre.  I think I’m a little more of a shit-stirrer than Chuck. I guess we are a little different.”

As the host of Watch What Happens Live Cohen has honed his interviewing skills to a fine art.  His lively nature provides a level of relaxation that has guests dishing personal stories probably never intended for the masses, and that’s a skill he’s utilizing for primetime.  “I feel like I’m the friend who kind of wants to get in and laugh and talk to people,” he says.  “I don’t know if I’m an authority on dating but I am enthusiastic about matchmaking and hearing about people’s dates.  I’ve had matchmaking successes with people having great dates or hooking up, but I haven’t had a couple that wound up getting married.”

Cohen was also thrilled for the opportunity to work withThe Bachelor and Bachelorette producer Mike Fleiss, who serves as executive producer on this project.  “He’s just amazing and he’s a Deadhead so we had that in common,” he exclaims.  “He wasn’t familiar with Housewives Nation and I wasn’t familiar with Bachelor Nation so it was perfect.  We kind of came together over Love Connection and the Grateful Dead.”

Thanks to Love Connection, Fleiss did get a personal introduction to Cohen’s Housewives; one episode of the show features a surprise blonde celebrity dater from the franchise.  Cohen is keeping the surprise guest under wraps, but wants it known “celebrity factor” is notthe focus of this show.

“I kind of don’t want to over-blow it,” he said when I asked him to elaborate more on the episode.  “The show is really about real people looking for real love.  We did one where we have someone from my universe and it was really just about us getting together and figuring out who the right person was [for her], but that was kind of a one-off.”

In a world overrun with matchmaking services and online dating apps, Cohen firmly believes the tried and true formula of Love Connection is as relevant today as when the original show debuted.  “People are still looking for love,” he says. “Dating is universal and things haven’t changed that much.  People are still complaining about being late, how they dressed for the date and how they looked.  It’s all timeless and universal.”

He was also happy to share his top five dating tips with me -- so listen and learn if you’re in the market for a partner.  “Don’t be late,” he advised. “Don’t have bad breath.  Dress for the date.  Get to know someone.  And don’t ever judge a book by its cover.”

Love Connection is telecast Thursdays at 9 p.m. on Fox.