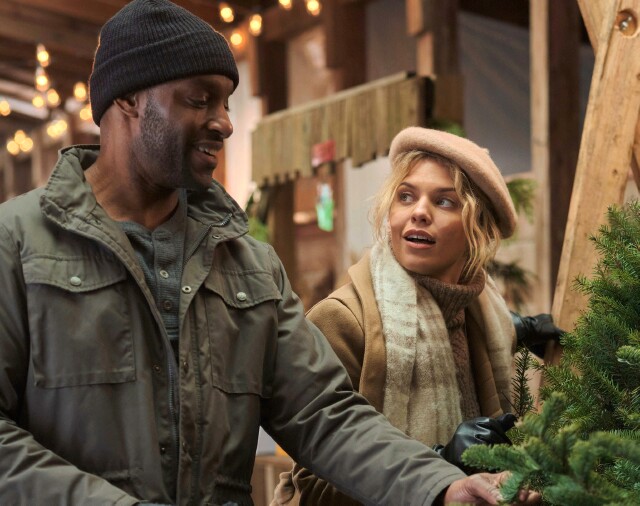 In what is becoming a Christmas tradition for AnnaLynne McCord, the actress, activist and philanthropist returns to Lifetime for the second time in as many years, starring in Dancing Through the Snow alongside Colin Lawrence (pictured above with McCord) and his real-life daughter Bianca (pictured below at right). McCord's last holiday movie was the network’s Feliz NaviDAD (2020), opposite Mario Lopez and Paulina Chávez, and it’s thanks to one person she’s a fixture in the holiday movie space. "It’s my mother," she shared in an exclusive interview with MediaVillage. "It’s funny because just enough time passes between filming one, to the next one, that it feels like it's been a while, when it's actually only a year. But, oh my goodness, at this point my mom's like, 'When is your Christmas movie coming out this year?" I'm like, 'Oh man, I'm going to have to keep this up as with mom looking forward to them,' so I can’t say no. Like Feliz NaviDAD was specifically for my mom as it's her favorite Christmas song."

Holiday fare is nothing new to McCord. After her break-out TV role as super-vixen Naomi Clark on The CW’s 90210 reboot ended in 2013, she followed it with a plumb part on TNT’s Dallas reboot. Then in 2014, she found herself breaking that vixen mold, landing a role in The Christmas Parade (2014). A year later she was starring opposite Mike 'The Mizz Mizanin' (seen on this season's Dancing with the Stars) in Santa's Little Helper, and Christmas had a hold of her. Breaking that [vixen] mold was very sneaky on my part," she laughed of her transition. "I kinda slid through the back door and was like, 'Ha, ha! See? I am a nice person.'

"You know, it's funny," she continued. "I was offered a few Christmas films over the years, and while my mom loves them for a reason, I was like, 'I'm a serious actress,' and everything had to be according to my rigid little rules. I read The Christmas Parade and thought, 'This is funny, and I like it.' My character had the realization that Christmas matters, so I got to play her two ways. That was my introduction [to Christmas movies]. It's the story, and character arc, that matter to me." 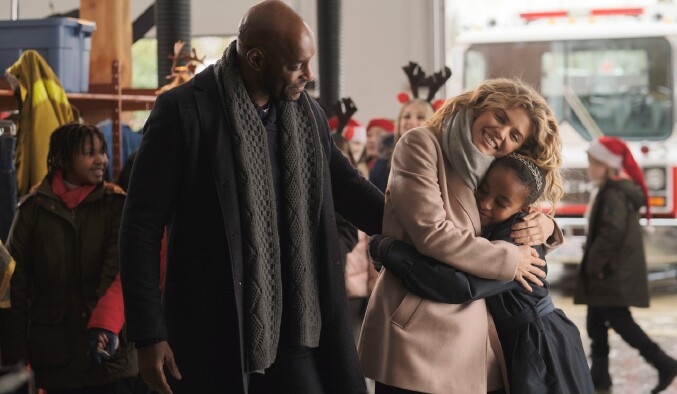 When it came to Dancing Through the Snow (the story of a widowed dad who finds himself at the center of a viral video after being captured helping his young daughter practice her ballet moves) it hit home. "This movie was more for me and not mom," she joked. "I'd seen the viral video of the [real] dad doing The Nutcracker with his daughter online, so when they sent me the script, I said, 'OMG, this is based on that video I watched like 100 times as it was so precious'."

McCord loved also loved that the script dealt with "serious" issues. Beyond the "fun" of a single dad going viral (when attention is the last thing he wants), it deals with a father moving on from loss, and a child who feels threatened that by her dad finding love (with the character Olivia, her ballet teacher), she will no longer be his focus. "I liked the way they didn't do the movie magic thing where a child is perfectly happy," she explained. "There is a real choice here about [possibly] not moving on because of [his] daughter, and him making the choice for her. It's so nice when any parent makes those decisions on behalf of their children.

"You want your child to be happy," she added. "So, a part of being the best dad would be showing your little girl why love is important. I think that the film, in its very sweet Christmas way, covers that serious issue. As humans, it's something we could be faced with. Be it moving on from divorce, a loss, or whatever. I really liked the way the film handles it, yet it keeps you guessing."

Another facet of the film that appealed to McCord was its casting. Lifetime has taken a firm stance on its diversity and representation initiative and a commitment to depicting a myriad of cultures on screen. It's something the actress is fiercely passionate about. "If you look at my friend group, there are humans who all look very different," she shared. "I have a couple of friends who look like me, then most everyone else is Korean, Japanese, African, Cambodian. I have a flutter of beautiful humans that that color my friend group. Growing up, I got to look at actors that looked like me and I dreamed that I would be like them one day. There are so many [kids] who have looked at that screen and have never seen themselves, or rarely, have seen themselves in a leading role.

"I have so much gratitude to Lifetime for going over and beyond to make a statement," she continued. "Especially with the holidays, when everyone's together and wants to see themselves reflected on that TV screen. I'm also grateful to Lifetime for going over and beyond to diversify their casting and tell real human stories, as humans, and all the different people who are living those stories. I think there's an aspect of 'honoring a culture and making sure you're not stereotyping it.’ That's a hard line to walk, and I feel they've done it really well. I hope people watching feel that way too, and I'm honored to be a part of the community Lifetime has built that's putting faces, orientation, and a belief system that looks and feels like as many people in the world as possible.

One thing for sure is this holiday season, McCord's mom will be proud. "My mom has been through a lot," she said in closing. "We kind of grew up together as she was so young when she had my sisters and me, so to be in this place in her life now, and every year get a little extra celebration with whatever Christmas film I end up doing -- that's special to me. The best movies always have beautiful little life lessons, so I look for those that aim to do that in a relevant way to what's going on in the world. I'm stoked to keep that conversation going as well."

Dancing Through the Snow is telecast Friday, November 19, 8 p.m. on Lifetime.