Anwen O'Driscoll On the Importance of Lifetime's "Left for Dead: The Ashley Reeves Story" 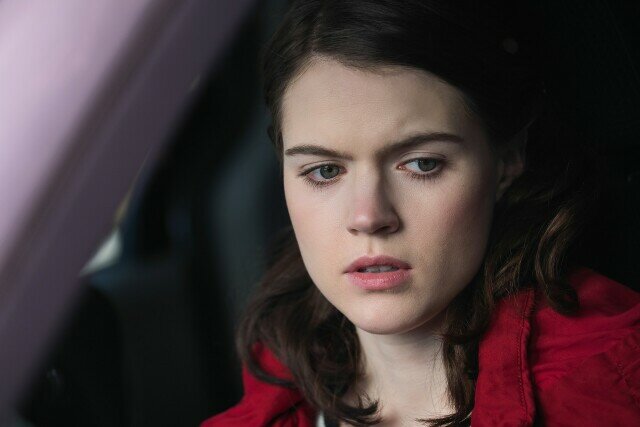 Lifetime's month-long, ripped-from-the-headlines programming event Summer of Secrets continues this weekend with the harrowing true-crime drama Left for Dead: The Ashley Reeves Story. In 2006, the then-17-year-old Reeves was brutally beaten and left to die in a cold, damp forest. Her injuries were so grave, the teen spent the 30 hours following the attack scared, alone and paralyzed, unable to move or help herself in any way. Thankfully, she was finally found, but her nightmare would continue -- first having to learn to walk and talk again, then trying to recall the events that led to her beating and to court to punish the man who stole her independence, but did not break her spirit. While it tells a horrific tale, the film stands as an important story of hope and resilience.

Leading the cast (which also includes Jennie Garth as her mother Michelle) is Anwen O'Driscoll (pictured at top), who completely immerses herself in the role of Reeves and delivers a captivating performance. After initially reading the script, O'Driscoll immediately knew what a powerful story it was, but not how physically draining the lead role would be. "Well, I thought I knew," she explained during an exclusive interview with MediaVillage. "I'd seen videos and interviews with (the real) Ashley and I could see the physicality in her vocals, and thought, 'Okay, this is what I'm going to have to do.' Then you sit down with an occupational therapist, and it [all] slowly becomes a reality, and how this would be much more intense than I ever thought. Also, in the process of it, you're thinking, 'Is this the right way to do it? Is this how she would do it?' There was a lot of questioning myself all the time.

"I didn't realize how frustrating it would be just acting or being in a scene and not being able to talk," she continued. "Sitting in a wheelchair was surprisingly emotional as I watched everyone walk around. It was overwhelming to think about people who are wheelchair-bound. It was a new thing for me, and naturally brought out some frustration." 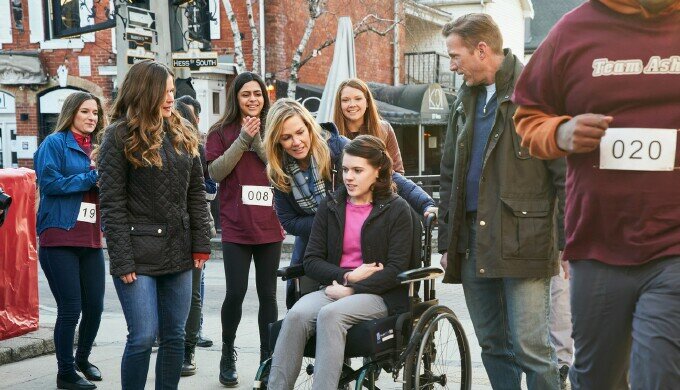 Throughout filming, O'Driscoll was happy to have Garth, with whom she shares many emotional scenes, as a collaborator. "I was very happy to work with her," she said of her co-star. "She's a wonderful person. The most helpful thing while filming was the fact that she was witty and funny. In between some of the super-emotionally heavy scenes where everyone was crying, she'd keep it light with a joke. It helped tremendously to keep me above water, and not sink into this and let it weigh me down when I'd go home."

O'Driscoll shared that mediation throughout filming helped her cope with the dramatics of the part, as did the film's director Gloria Ui Young Kim. "Gloria is big into crystals and stones and their healing properties and energies," she recalled. "She gave me a grounding stone, one that grabs emotions, which I carried everywhere. There was one scene where I was sitting on a bed, and the crystal was underneath me. In between takes I got up, walked away, and forgot to pick it up. Someone asked, 'What is this weird green rock doing on the bed, and where did it come from?' I was like, 'That's mine! I need that!'"

One part of Reeves' story that hit home for O'Driscoll was facing the court of public opinion. Reeves knew her attacker, so many believed she created her own risk, and was somehow responsible for her situation. "I could relate to that in some aspect," she shared. "Struggling with getting the people close to her to believe her story very much resonated. I've had a similar experience so that drew me in immediately. She was 17 and had the whole town come after her for having a relationship with an older man, when the responsibility was his. She had so much hatred directed towards her all the time.

"It's horrifying how people get into this mass thinking," she added. "The victim-blaming, and misogyny that goes into it. We blame the younger girls more so than the older man who should have [more] responsibility. That's such an important message. Think about young kids who are trying to find their way. Everyone makes mistakes, but we're so hard on kids. That message of misogyny, and victim-blaming, is important as the #MeToo movement is still going and I see young girls blamed all the time. I want to keep bringing these messages forward."

O'Driscoll didn't meet the real Reeves in preparation for the role. She's happy she didn't as it might have affected her performance. Still, she was very cognizant of playing a real person throughout the production. "I really wanted to do her justice, but I also wanted to respect her space and [not] bring all that up again," she said.

While she refers to herself as previously being "non-confrontational," O'Driscoll did emerge from the project changed. "You can play characters who are warriors, but they're not real people," she said in closing. "Ashley's story is inspiring. As I was acting, I felt like just a bit of her spirit was there. Playing her was a learning curve and a life lesson."

Left for Dead: The Ashley Reeves Storywill be telecast Saturday, June 12 at 8 p.m. on Lifetime as a part of their Summer of Secrets programming event.