By Simon Applebaum December 21, 2015 Tomorrow Will Be Televised Archives 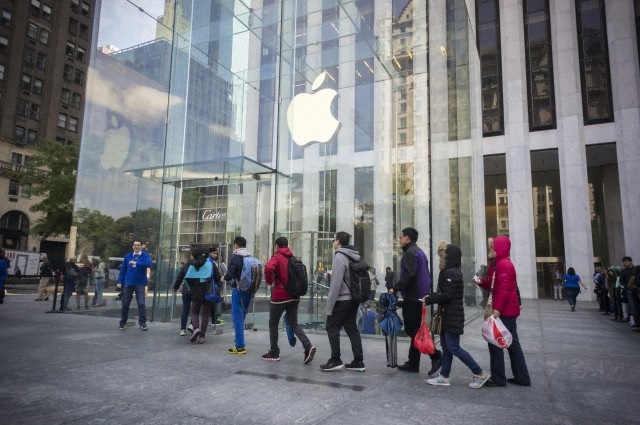 One evening earlier this month here in New York City, in between the end of a media conference and the start of a cable network's holiday party near 30 Rock, I decided on a first in my life -- a visit to an Apple store. My report follows.

Sure there was an intention behind this walk north on Fifth Ave., over to the space designated by a glass pane across from the Plaza Hotel and the southern border of Central Park. For the last three months, I've been reporting about Apple TV 2.0, the long-awaited set-top device allowing all those 1.3 million developers of smartphone and tablet applications to reach a new Holy Grail -- the TV set -- with their creations. Now, on a street filled with holiday revelers and shoppers and with free time to spend, I had the perfect opportunity to test-drive those apps in public. 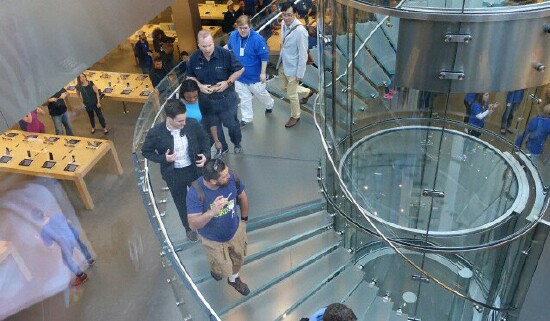 I stepped off the spiral stairway of Apple's edifice, looking for those TV 2.0 demos. (Unlike other Apple stores in Manhattan, this one is below ground. The only thing street-level here is that glass pane.) One big room lay ahead of me, the center taken up by rows of Apple Watch and watchbands, Macintosh computers and iPads. On this night, two Apple TV 2.0-powered sets were operating side-by-side in the upper right corner of the room. When I made my way over there I noted a child to my left, smiling over how high a score he had on the game in play. A man with a white goatee was on my right, checking out various apps. It looked like he was going to turn away, giving me the opportunity to move in, but he suddenly decided to test yet another app. That went on for about 10 minutes.

When he finally left, I stepped forward and placed the smallest remote invented by the civilized world in my right hand. At first I believed one of three buttons would take me from screen to screen in seconds. No go. A few minutes later, I figured out that to move the screens, I had to swipe the black space above the buttons one horizontal way or the other. To open the screen I wanted, I simply had to press the black space.

Thanks to my Sherlock-style deducing, I was ready to go. I admired the other users around me for their abilities to manipulate the screens without any directions on the tables or intervention from store employees.

The on-screen interface was clean and clear, with the home screen listing various categories from games to lifestyles. It took one or two clicks to find all the apps in a given category and then, after all the scrolling, one click to open the app I wanted.

The total number of clicks depends on the nature of the app and what a person wants to do with it. In Craftsy, an arts and crafts video showcase, there's plenty of crafts to look through (and in some cases, order product from). Gilt Group's app includes a profile of various dresses with the vital stats, then the order placement. Zillow's quite comprehensive app features new homes around the country, complete with room diagrams. The AirBnB app is among the more multimedia in nature, with graphics and photos of various destinations, plus voice-over narration.

Other early 2.0 attractions include a variety of workout/exercise videos, photo arrangement and library options; PlayKids, a mix of animated short subjects presented in a movie theater setting, and MetroEarth, an unusual 3D weather roundup. Newcomers to this 2.0 fold include TripAdvisor, HomeAway, Tastemade and GifTV.

Not once did I encounter an app that was a mess to maneuver or boring in nature. The content was framed nicely, with the typeface large and attractive.

As I wrapped up my experience and moved away, another child was ready to head for the game section. Before reaching that spiral trek back to Fifth Ave., I turned my head one more time back to the corner. The body language on that child couldn't lie. Apple TV 2.0 had found a new young user. Back on the street and heading south to 30 Rock, there was no doubt on my end that child's parents would soon spend time and money at the Apple store nearest them.

One situation, of course, does not foretell an ultimate result. We're still in the early days of Apple TV 2.0's existence, with more than 3,000 apps available and some 450 apps introduced each week. However, if the outcome repeats and multiplies, Santa's minions on this corner of Earth will be maximum busy next Christmas time. So will elves minding the action at Apple's smart TV and device competition.

Season's greetings and a prosperous 2016 to all! Until the next time, stay well and stay tuned!