Are Apple TV 2.0 and The Wave Interactive Mileposts? 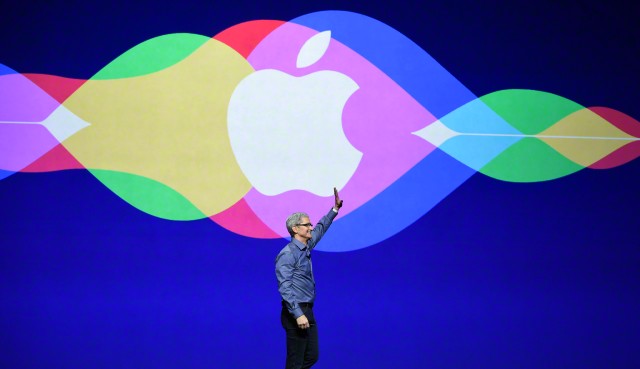 Have we witnessed the future of how we watch and use TV? We may have if a pair of developments within the last week turn out the way their advocates maintain. One development was rumored for years while the other has surfaced after a run of under-the-radar crowdfunding.

In the case of Apple TV, version 2.0 of the set-top box first introduced as Steve Jobs' "hobby" back in 2007, it was the long-anticipated conversion from alternative program delivery to smart TV-making mechanism. Before 7,000-plus people filling an auditorium in San Francisco last Wednesday, Apple chief executive officer Tim Cook (pictured at top) ended the upgrade wait with two sentences: "Here's the new Apple TV.  We believe it is the future of television."

Although modified iPhone, iPad and Apple Watch products also were unveiled over the two-hour presentation, Apple TV 2.0 was the clear headline attraction that afternoon and the object of much debate since. There is lots of speculation over whether the current universe of 25 million 1.0 users will switch what they have now for a model on sale late next month for $149 or $199, depending on how much processing power they desire. Similarly, there is much talk about Apple's decision to convert Siri from a voice control to a search engine.

When you add everything up, the fortune of 2.0 in a marketplace already bunched with smart TV set makers (Samsung, LG, Vizio, etc.) and smart accessory providers (Roku, Chromecast, Amazon Fire TV, Shield, etc.) rests on the answers to two questions.

First, will the hundreds of thousands of entrepreneurs behind applications for the iPhone and iPad rally to adopt their current offerings to TV and set off a bonfire of imagination for Apple 2.0 apps? Cook took that bet when he said TV "needs a new foundation ... the future of TV is apps." As in going way past streamed video or multiplayer games. As in services like AirBNB and Zillow, interactive shopping from organizations like Gilt Group, or augmented reality destinations like Foursquare.

Second, how far Apple goes to position Apple 2.0 as a must-have from the start, both among the current faithful and newcomers? Between now and late October, from this vantage, Apple must stage demonstrations and extensive debriefing with the press and public in New York, Los Angeles, Silicon Valley, Chicago and anywhere else possible -- and do so with both company executives and app developers on hand. I recommend Cook, Eddy Cue, the executive managing Apple TV, or other senior officers book face time and panel time at the collection of TV industry events ahead -- Diversity Week, the New York Media Festival, NYC Television Week and/or the New York TV Festival. Google TV fumbled its first time out several years ago, in part because its management decided to lay back and sleepwalk through its rollout, while partners Sony and Logitech ran with the ball.

As Apple 2.0 sets up its public push, independently-owned Touchjet is gaining momentum and solid reviews for both its product and how it came to users. The product is Wave, an infrared-powered device which converts TV sets into touchscreens capable of displaying smartphone or tablet apps, then using them by tapping one’s fingers against the set or playing with a smartphone or tablet keyboard. The process also can display apps created directly for TV.

In order to build a base of users, Touchjet and chief executive Helen Thomas turned to Indiegogo for a month-long crowdfunding drive. Donors pledging $149 would get Wave, ready to deploy once installed in the home. The aim was to raise $100,000. With two weeks left in the campaign, more than $500,000 was raised, and by then, word-of-mouth about both Wave and how well donors liked it caught the attention of Fast Company, Techcrunch, other print and online journals, and -- disclosure time -- yours truly, who ended up interviewing Thomas on my Tomorrow Will Be Televised program week before last (available at www.blogtalkradio.com/televised and iTunes).

The result provoked Touchjet to continue the Indiegogo campaign into early October, with more than $590,000 raised as of early Tuesday morning. And at that $149 level, donors now get an upgraded "Plus" version of Wave with added processing power and Skype (using a Webcam/microphone hookup at the top of their TV).

Just like Apple TV 2.0, Touchjet probably will have to expand its marketing strategy to elevate into the arena of major players in this evolving smart/interactive TV world. Apple and Touchjet both had better move quickly, because it doesn't look like the rest of the field will stand still. There's already buzz that Amazon Fire 2.0 will be released soon, and travel booker Orbitz is among the current Fire TV's newest attractions. As for the smart TV makers, with International CES 2016 four months off, early hints about what will be new with their models should arrive soon.