Are You Tuned In to the New Me(dia)? - Say Media 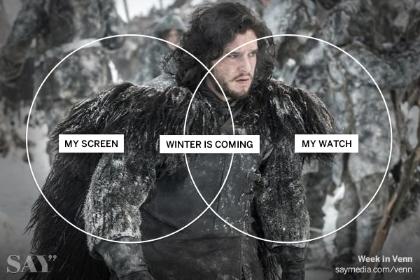 When you get home today and sit on your couch to melt in, take a look at the coterie of remotes with scattered access to the AV systems around you. Do any of these electronic candy bars serve as the screen and the remote? Probably not unless you count your phone or tablet or the latest set of game console controllers as dual purpose; and in case you've missed recent announcements ranging fromNielsen to Sony, this broadening definition is far more than a trend. The media map has been redistricted.

The new content congress is all the screens that you can be reached through, persuaded by, and emotionally plugged into daily. Perhaps the best tagline for this widening crevasse between established behavior and emerging behavior is HBO's claim that "It's Not TV… it's [our addictive content]." As we tune into Boardwalk Empire, Game of Thrones and Larry David's Curb, the premium channel that had become so tethered to our weekend has empowered its audience to become untethered from the traditional living room and bedroom mantles. It seems that Appointment TV ("Sunday is … HBO") has shifted to Self-Medicating TV ("HBO GO. It's HBO. Anywhere.").

But delivering single stream linear content across mobile, tablet, laptop, HDTV and connected devices like AppleTV requires so much more than syndication. It's time to reevaluate presentation layers and navigation. If previous iterations of content have been focused on analog expression - great sounds and images - the best that digital has to offer is building upon our ears and eyes and moving us to take action through touch and movement. And by touching the content, there may be an increased probability that the content will touch us as well.

If you think I'm referring to things like Pimps Up, Ho's Down, Hookers at the Point with my reframing of digital and my focus on HBO, know that I'm actually thinking of the first four seasons of Mad Men that made us feel something (seduced, powerful, riveted, even angry), the Girls-within-a-Girls episode that took place with Hannah in Jessa's father's house (sad, nostalgic, scared, appreciative), or any number of The Walking Dead episodes (paranoid, vigilant, horrified, base). Many of us experienced those scenes on our big screen, but a can't-be-ignored portion of the audience, bigger than perhaps you realize watched on smaller screens. And while there is a rising trend of either/or, most of us had a choice.

When you get home today and sit on your couch to melt in a bit, despite the plus-30" flat screen in front of you, how many of you will curl up with a good tablet to see what's on? We are drawn to things that offer convenience, convergence and consistently meet our needs. When you combine these three and a screen becomes as accessible as Chapstick or a pack of Trident - the other things lingering in your pocket - you can understand the attention shift. And as it happens, heavy tablet users respond more positively to ads .

But it's one thing to consider consumer behavior patterns; it's something else to conceive how to put this into capital action. And Big Media/Telecom is certainly trying. While they focus on portfolio campaigns (look at our services), product launches (look what we have now!) and vision definition (look where we're headed), the biggest hurdle remains churn. As a result, Comcast, Time Warner, Verizon and AT&T and others may offer digital voice, television, Internet and mobile services in a nice McDonald-ized bow because packages breed loyalty. However, in effect they are presenting you with less accountable paths to connect to their bandwidth, at least for marketers. As eyes move away from television towards more interactive counterparts, the advertising packages they offer to P&G, Coke and Ford must begin to prove the value of those more migratory audiences. Accounting for this new Me(dia), where individuals are charged with more and traditional marketing approaches can count on less, is a significant creative challenge, in which content producers should think bigger and content packagers should think smaller.

Here are three letters to get the ball rolling: H, B and O (home, box, and office). The pertinent reality here is that each of these are one and the same now. The line between work, play and home is beyond blurred, it's almost transparent. Not to mix metaphors, but just as Video Killed the Radio Star (MTV's first and ever appropriate music video) positioned an interesting pivot in audio presentation, mobile and tablet require the rethinking of digital.